One way people learn that they’re doing great work is when someone who does what they do and does it well tells them so. That’s essentially what happened April 6 in New York City when 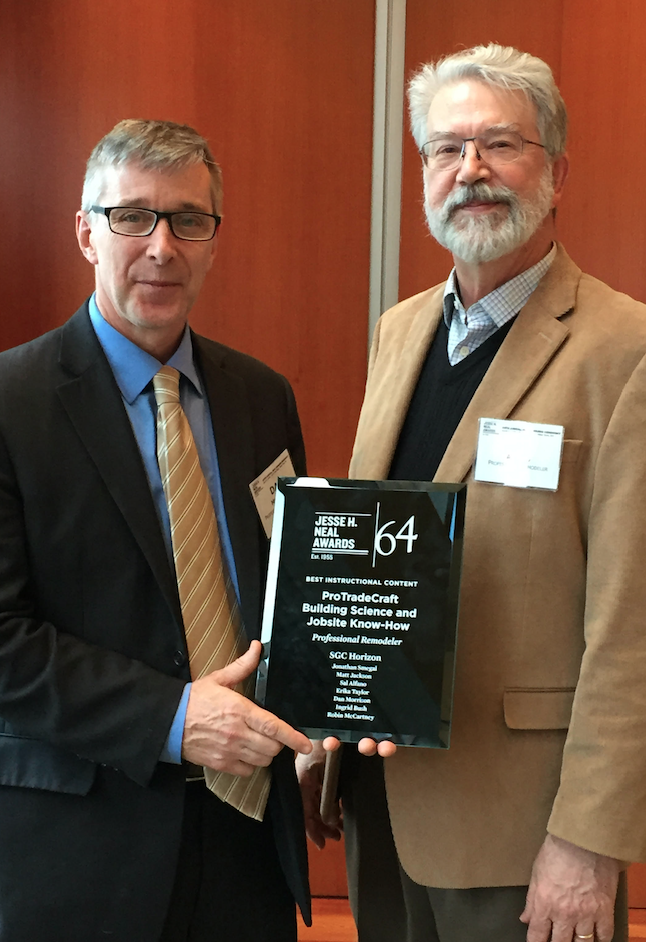 Professional Remodeler was awarded a Jesse H. Neal Award for “Best Instructional Content.” The winning entries were taken from the “Building Science” and “Jobsite Know-How” departments in our ProTradeCraft magazine section. Inspired by the online success of ProTradeCraft.com, we launched the print section in 2017, adapting the website’s podcasts, videos, and video animations into print articles that bring construction how-to content to remodeling professionals. The section begins on page 36 in this issue.

Three other entries were also finalists: the feature articles “Dwindling Flame?” (Jul/2017) and “From Zero to $50 Million” (Aug/2017) in the “Best Profile” category; and the back-page editorial “As I See It” in the “Best Commentary/Blog” category.

Created by Connectiv in 1955, The Jesse H. Neal Awards recognize editorial excellence in business publications across print and digital platforms. Contest entries are peer-reviewed in a multi-stage process that involves more than 150 experienced business media editors. A maximum of four finalists in each content category are selected based on scoring in three areas: journalistic enterprise, extent of service to the field, and editorial craftsmanship.

Congratulations to our editorial and art staff, and to the many contributors who share their hard-won expertise with us, and who allow us to share it with our audiences at ProTradeCraft.com and in Professional Remodeler.

Included in the photo (from left to right) is ProTradeCraft editor Dan Morrison and Pro Remodeler executive editor Sal Alfano.