Is the BBB's Flame Dwindling in a Digital Age?

What does the Better Business Bureau have in common with Major League Baseball and print publishing?

Like many well-worn institutions in America, they’re all trying to figure out how to be accepted by the consumers and businesses that view them as anachronisms to their lives in a digital age.

Whether the public’s perceptions are accurate is almost beside the point. To prove naysayers wrong, these once-unassailable pillars are now reshaping their analog personas to push meaningfully into a digital future.

The jury is still out, though, on whether such refinements can lure enough consumers, especially the all-important Millennials whose lifestyles and group dynamic don’t automatically align with legacy brands and products.

At 105 years old, the Better Business Bureau is a prime example of a venerable institution that’s trying to reenergize while maintaining its position as a resource for consumers to find reputable businesses and to resolve disputes about products or services.

Given its 230,000 media mentions last year, the BBB is hardly inconspicuous. And based on its latest research, the BBB can still claim top-of-mind awareness: 73.1 percent of American consumers are familiar with the BBB; 82.7 percent use its accreditation seal, a torch, as a guide when making a purchase; and 76.9 percent would complain to the BBB if they were unhappy with a product or service.

The organization claims 384,000 accredited businesses, an impressive number, yet one that’s been greatly diminished by other online review and referral sites such as Angie’s List, HomeAdvisor, Houzz, Porch, and Yelp.

Historically, the BBB rating and logo have been shields for remodeling companies that want to present third-party validation of their integrity to a public that distrusts the entire industry. “There are a lot of dishonest contractors out there, and I like the fact that the BBB holds businesses to a higher standard,” says Seth Selesnow, VP of marketing for Long Island, N.Y.-based Alure Home Improvements, one of the country’s largest remodelers, which has been a BBB Accredited business since 1976.

Twenty-five percent of the business profiles accessible on the BBB’s website, and 45.6 percent of its accredited businesses, provide home-improvement–related services (see sidebar, left), evidence that remodelers and contractors still see value in the organization.

One of them is Handcrafted Homes, in Roswell, Ga., a BBB Accredited business since 2003. Recently, the company was grappling with a homeowner’s reluctance to pay for a completed project, and owner Judy Mozen got wind of a daylong class on managing customer expectations, conducted by her local BBB chapter. She figured it couldn’t hurt to attend. “I flipped out at how good this was,” Mozen recalls. Applying lessons learned from the class, she was able reach an agreement with the recalcitrant homeowner, which included payment.

But while home-improvement businesses continue to be a key component of the BBB’s membership, a sizable number of professionals, maybe even the majority, seem to view the organization as past its prime. To gauge industry members’ attitudes toward the BBB, Professional Remodeler surveyed remodelers around the country. We supplemented that research by interviewing nine contractor and remodeling companies of various sizes, as well as the CEOs of four BBBs, and their umbrella organization.

The survey found that 66 percent of the 501 respondents aren’t BBB Accredited businesses, and 60 percent hadn’t been accredited for at least five years (see “By the Numbers” sidebar, right). While some respondents thought that the BBB brand carries weight with homeowners, more typical was this comment, from Colin Pedigo, president of Pedigo Construction Group, in suburban Dallas: “I feel that the BBB is applicable to the last generation, and the future is in online Google reviews or even more industry-specific platforms such as Houzz.”

There’s no shortage of reasons why the BBB has lost some of its oomph. One is a snowball effect that happens to many older brands. Professionals opt not to get BBB Accredited because they aren’t hearing enough good things about the BBB from peers or clients. Indeed, it’s sometimes difficult to even find the BBB’s logo on the websites of Accredited businesses, whereas Alure, for one, heralds its Angie’s List Super Service Awards, and Handcrafted Homes highlights its six “Best of Houzz” awards.

Changes in local municipalities have also had an effect. For example, the counties around New York City require that contractors are licensed through the state’s Department of Consumer Affairs, to which businesses pay fees that go into an escrow account that covers complaint settlements.

Several pros, and even some BBB officers, note that because younger Americans are buying houses later, they have less urgency to use the BBB to search for reputable remodeling help. “Many people become familiar with the BBB as they become homeowners,” explains Mary Power, president and CEO of the Council of Better Business Bureaus, the network hub for BBBs around the country.

These explanations, though, pale beside the indisputable fact that consumers now simply have far more choices when seeking recommendations about companies. And while Yelp and HomeAdvisor get a bad rap for lax review vetting and/or pay-to-play practices, most remodelers concede that their sheer volume, along with social-media communities such as Facebook and Instagram, have collectively marginalized the BBB. The BBB also lacks the advantage of more visual sites, such as Houzz, which give consumers design ideas that generate leads.

The Sum of Its Parts

In this competitive environment, the BBB must juggle three public relations balls: defending its turf, minimizing past missteps, and countering persistent misperceptions about its mission and purpose.

More than a few remodelers recall the serious hit that the organization’s integrity took several years ago when it closed its bureau in Los Angeles in the wake of accusations that it sold ratings. Halfway across the country in Tulsa, Okla., embezzlement charges resulted in the firing of that bureau’s CEO. Power, the Council’s president, discusses these events as examples of how the BBB’s self-regulation is effective. And, truth be told, the incidents appear to be isolated rather than evidence of systemic corruption. However, the operational autonomy that may have contributed to these aberrations may also be working against the BBB in its attempts to get the bureaus to act more like a coalition. Currently, each bureau operates independently, with its own management and budget. Bureaus are free to tailor programs and advertising to their local markets, including those that derive from the Council.

But some bureaus are more financially viable and proactive than others, and this fragmentation poses challenges for the BBB. Many remodelers insist that the organization needs a strong national marketing effort in order to have greater meaning for consumers and businesses. Many others wonder if the BBB would be more relevant with Millennials and Gen Xers today had it jumped onto the social media bandwagon sooner. 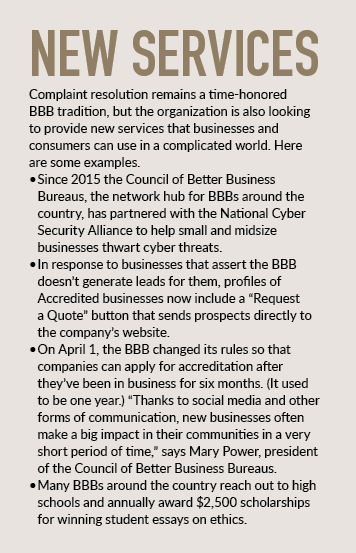 While still short of a national campaign, many bureaus are working hard today to raise their profiles with the public. “We’re constantly engaging consumers on social media, too,” says Jarrod Wise, VP of marketing and communications for the San Francisco Bay Area’s BBB. His bureau is active on Facebook, Twitter, LinkedIn, Snapchat, and Instagram. The Council also has a program where BBBs can share information about their Accredited businesses with HomeAdvisor and Porch, which links back to the bureaus’ business profiles, Wise says.

The BBB St. Louis celebrates its 100th anniversary this year and has seen its Accredited businesses increase to 7,700, from 5,549 five years ago. This BBB’s president, Michelle Corey, has been aggressively promoting her bureau’s activities: She has a weekly segment on a local TV news program and spots on two radio shows. This BBB has 10 journalists on staff pumping out content. (Yet, harkening back to many remodelers’ criticisms, as of this writing, the Bureau’s latest Twitter and Instagram posts are more than two years old.)

In 2013, the BBB made a major concession to today’s realities when it started allowing consumers to post reviews of businesses. To sustain the BBB’s “trust” factor, the bureaus’ vetting process prohibits anonymous reviews, confirms the poster’s identify by email, and sends the review to the company in question before it’s published to verify that the reviewer actually did business with the firm.

Another newer BBB initiative is Scam Tracker, launched in 2015. The national crowdsourcing tool gives consumers a place where they can report alleged scams and fraudulent activities in real time. The BBB analyzes the data and provides warnings to the public.

Do these newer tools indicate that the BBB may eventually back away from offering its complaint-resolution services? That, apparently, is occasionally whispered in some bureaus’ corridors, although many in the organization vehemently oppose even the thought of such a move. “BBBs are the gatekeepers,” says Dan Parsons, president of the BBB of Greater Houston and south Texas. “Complaints and reviews are separate animals.”

Other remodelers, such as Josh Wiener, president of Silver Lining Interiors, an $80 million general contractor and construction management firm in New York City, wonder if the BBB’s time-honored way of resolving disputes still jibes with how today’s consumers settle grievances. “There are lots of ways to complain,” he says, “and you can do more damage [to a company] complaining online than filing with the BBB.”

Over the last year, there’s been a major shift in the remodeling business from a farming mentality to a hunting skill set How should remodelers react when consumers get scared? Stepping Back: Selling My Company to Employees 10 Tips for Transitioning Out of Your Business

On this episode of Remodeling Mastery, host and industry advisor Mark Richardson dives into what to consider as remodelers plan their exit In this episode of Remodeling Mastery, Mark Richardson shares insights into the softening market and how to communicate with clients Over the last year, there’s been a major shift in the remodeling business from a farming mentality to a hunting skill set

How should remodelers react when consumers get scared?