A report released in early January by Digi-Capital, an advisory firm specializing in services for virtual reality (VR) companies, projects that by 2021 VR will have become a $25 billion market. So when veteran remodeler and 2016 Forty Under 40 recipient Lucas Herrick brought to our attention the technology’s potential applications in remodeling, we were keen to listen.

So keen, in fact, that we contacted two other remodelers currently using VR in their businesses to get a broader sense of how VR is being applied in the industry.

Sauer is neither a typical remodeler nor a typical VR guy. He does some remodeling work—at least one project a year—and some real estate fixing and flipping, but his primary business comes from doing 3-D scans of homes, which isn’t technically VR.

Think of a 3-D scan as a 360-degree photo that you are able to move around in a bit. You can look to your left, to your right, down (up, if you have the right equipment), and, if you’re wearing a headset, it can feel like you’re in a virtual world. But virtual worlds are created, and what you get from a 3-D scan is a rendering. In other words, a 3-D scan will show you the bathroom that exists, while VR shows you the bathroom that could exist.

Still, Sauer’s renderings are very good—in no small part due to his camera. Until recently, he was using the Matterport Pro 3D, which, when originally purchased, cost around $4,000. He now uses the Matterport Pro2 3D, currently available for $3,995. Sauer owns the camera, but he pays Matterport approximately $70 per month for cloud storage.

The cameras use an array of three RGB-D image sensors mounted on a motor, which rotates the camera. Via the sensors, the camera captures a color and spatial readout of whatever area it’s scanning and converts that data into a rendering of the room, complete with detail and depth. When required, Sauer can also use the web-based 3-D platform Archilogic to alter his renderings by, say, adding specific finishes.

The scans that Sauer produces can be viewed using a VR headset; and he has one, which is good for “wowing” clients, he says. But he prefers to show clients his renderings using more readily available devices such as laptops, smartphones, and tablets. It’s more practical for his purposes, which are primarily documentation and reference. “I use [scans] for before and afters,” says Sauer, who mostly provides scans for contractor and real estate agent clients. “It really allows you to show every piece of the project that was touched and how it was or wasn’t changed.”

Sauer sees big marketing potential in contractors using 3-D scans to fully illustrate the difference that a remodel can make to a room, or even a whole house (though, Sauer points out, the sun can flood camera sensors with infrared, sometimes making exteriors difficult to shoot). Factor in the use of a VR headset, along with predictions that the technology will proliferate, which will mean lower prices for headsets, and the potential is immense because the immersive experience of viewing something through a VR headset is currently unmatched.

For now, many of the 3-D scans’ applications are functional. For instance, Sauer has used 3-D scans as under-the-drywall references. He scans a room with a wall or walls stripped to their studs and has it serve as a map for the electrical, mechanical, and plumbing systems once the walls are sealed up. 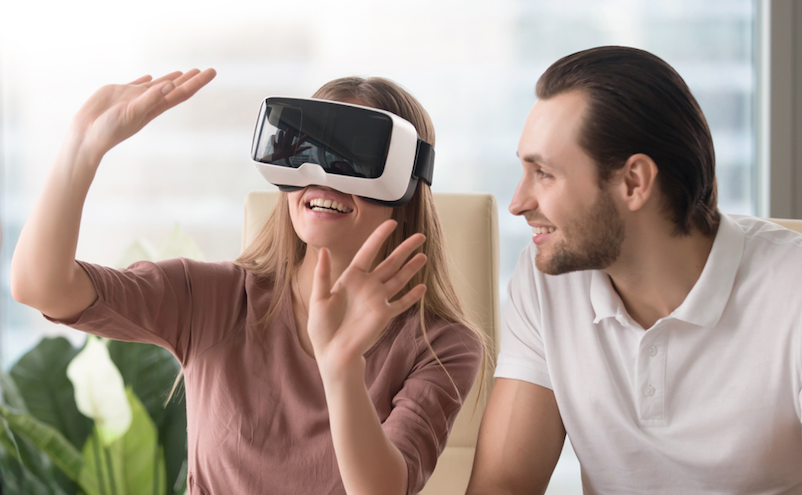 In 1997, Zimmer bought his first computer and immediately started working in 3-D. “I thought everyone was working with it,” Zimmer says. “Turns out, there are still architects working in 2-D.” For 40 years, Zimmer has been in the design/build business, and for 20 of those years, he owned his own firm. Today, he mostly does design work. And though 3-D design is his specialty, he still draws in 2-D—for good reason. The design software that Zimmer uses, Envisioneer by Cadsoft, can convert 2-D designs into 3-D virtual structures. That, in itself, is a selling point for Zimmer. “It means I can communicate with engineers and architects without having to redraw things,” he says. “I can also communicate my designs with other design programs that have more specific specialty features, like 20/20 [a kitchen design program].” He adds: “Because of that, my clients can go to a kitchen-design specialist, have that specialist send me their designs, and I can incorporate them into the VR model without a problem.”

But while ease of use is behind Zimmer’s endorsement of Envisioneer, his reasons for pursuing VR are more customer-facing. “They love it,” he says. “And someday it’ll get to the point that they expect it.”

What Zimmer means when he says people love VR, is that it still impresses them. He explains that VR isn’t like a panorama shot or a 3-D walk-through on a laptop that people will be happy with but not blown away by. VR is more exciting, he says, because most builders and remodelers haven’t yet bought into true VR, and so it’s unexpected.

“What I found in the design-build business, was that for 90 percent of clients ... if I could get them confident on the front end of the design, then I’d get the job,” Zimmer says. “The fact that VR still excites people is an opportunity.”

And that opportunity is twofold: Not only does VR get clients jazzed about the designs for their home; it also helps Zimmer articulate the peculiarities of any given design. “Take a lake home, for example,” Zimmer says. “The owners want to add a second story, turn the breezeway into a bedroom, tear off the roof, and put attic trusses over the garage to make that an office. I can give them renderings and images of the designs, but there will be a gap in their understanding of what they’re seeing. With VR, they can explore the addition as it will be and see firsthand why a staircase may not be able to go in a particular spot.” It’s the difference between showing someone the sheet music for a song and having them actually listen to it.

... for 90 percent of clients --- if I could get them confident on the front end of the design, then I'd get the job. The fact that VR still excites people is an opportunity.

The one setback, Zimmer has found, is that using the full VR setup requires clients to come into his office, which can be tough for busy people. But he’s working to address the issue, looking into virtual walk-throughs that can be viewed using much more affordable smartphone-based VR rigs.

Zimmer’s Envisioneer program offers monthly subscriptions. However, varying single-purchase versions of the program are available, starting at $99 and reaching $2,495.

By Herrick’s estimates, VR is four to five years behind being a standard; yet, already, he and his staff use an Oculus Rift headset, spend about $4,000 per year for design software, and dedicate 10 to 15 hours a week to VR development, which includes not only bettering their capabilities but brainstorming additional applications.

“With where VR is now, people can walk both the exterior and interior of a home. They can really see perspective—different views, different angles, different ceiling heights,” says Herrick, who works with several 3-D design programs and even has a coder on staff. “Every-thing is so visual in our industry—blueprints are great, elevations and views are great, but when you can actually put people in that 3-D environment, it’s amazing.”

And while there is an undeniable novelty to the idea of VR—especially considering how relatively unexposed people still are to the technology—Herrick well understands its immediate practical role in sales and communication for remodelers. To illustrate, he talks ceilings.

“Do you really need 12-foot ceilings in a house?” he asks. “Because 10-foot ceilings look pretty good.” It’s Zimmer’s staircase-in-the-garage example repackaged. “There is a significant cost difference between a 10-foot and 12-foot ceiling, but both look good,” Herrick says, adding that seeing how the end product will actually look helps homeowners decide whether particular features are worth the additional expense. “VR helps our clients make the best financial decisions for them.”

But the difference between 10- and 12-foot ceilings is just one example of how VR can help during the remodeling process. In conjunction with the design arm of a local lumberyard, Herrick is currently developing overlays that would show different styles of wood in Modern Touches’ 3-D environments. That way, the remodeler’s clients will be able to see how particular woods will look once purchased and installed—before they actually purchase and install them.

“It’s the technology of the future,” Herrick says. “We’re hoping to be recognized as being at the forefront when it becomes a standard for people.”

More on AR and VR:

Tips to Create a Virtual Showroom