The job for a two-story addition was barely underway before architect Rob Clarke started getting change order requests. And so it continued. Clarke’s firm, CBI Design Professionals, in Bloomfield Hills, Mich., had replaced interior trim, flooring, doors, exterior stone, and brick veneer; renovated a bathroom; rebuilt and expanded an elevated terrace; and almost completed work on a spiral staircase when the clients emailed Clarke a picture of a ceiling, rounded and ornate, with beams and detailed plaster molding. They asked if he could replicate that look for them. No matter that the stairwell’s flat drywall ceiling was already finished, and to create the new stairwell ceiling, truss work would need to be reengineered.

“It happens all the time,” says Clarke, an architect with more than 30 years’ experience. “When your job is to help the client build their dream home, you learn to [accommodate] these kinds of things.” For remodelers, starting one project that becomes several is nothing new. But Clarke and others say that a homeowner willing to see a newly built ceiling ripped out and replaced shows just how important the ceiling can be—not just for function, but as an artistic choice; a way to bring that “wow” factor to a space. 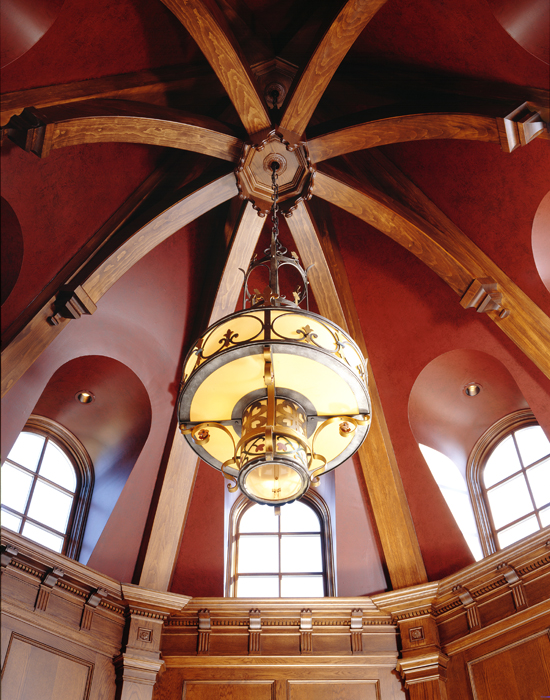 Clarke has hundreds of tray ceilings, coffered ceilings, barrel ceilings, and other ceiling designs under his belt. He estimates that about 10 to 15 percent of the homes he worked on during a 20-year span involved a special ceiling of some kind. But in the past five years, he says, that number has risen to about 25 percent.

“Most clients are highly educated,” Clarke says. “And although homeowners who want to change course midstream still exist, more often than not they come to me with ideas in hand.”

Architects such as Bret Parsons say the best ceiling ideas are those that combine problem-solving with aesthetics. “Rooms are all about how they make people feel when they’re in them,” says Parsons, a California-based architect, real estate agent, and author of three design trade books. “A good contractor knows a room is optimal when it’s in proportion. And the ceiling is one of the crucial pieces to that puzzle.”

Typically, Clarke says he gets requests for barrel ceilings in larger public spaces; coffered ceilings in family rooms, dens, and libraries; and tray ceilings in living and dining rooms.

A barrel ceiling’s semi-circular shape creates openness at the high point of the arc, while the downward curve toward the walls suggests a cocoon-like intimacy. Barrel ceilings are also used to create a visual focal point in the space, perhaps focusing on a fireplace, bay window, or entryway to another room.

Coffered ceilings use beams and molding to divide the ceiling into a series of decorative squares, adding dimension and texture to a space.

With tray ceilings, which are often used to enhance the geometry of a space, Clarke says the width, depth, and length of the inset tray will vary depending on the dimensions of the room, as well as the demands of the job and aesthetic choices. A 4-inch-deep tray for an 8-foot ceiling, or an 8-inch-deep tray for a 10-foot ceiling is a good rule of thumb. For a 12-by-16-foot ceiling, the inset tray would generally start about 8 to 10 inches in from the wall. The goal, Clarke says, is to accent a space without overpowering it. 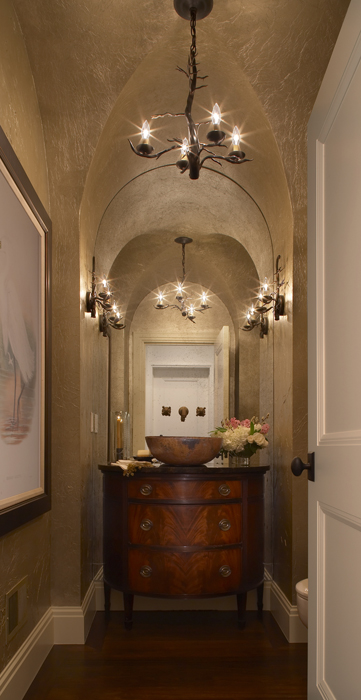 Parsons agrees, though he cautions not to equate one ceiling type with one particular type of room. “Every room is different,” he points out. “A barrel ceiling may seem like a good idea for a hallway, but if that hallway is 30 feet long and the ceiling is only 8 feet high, it’s going to feel claustrophobic.” What’s more important is that ceiling design and materials stay true to the home’s original structure. Often that means using exposed wood beams in Spanish or Pueblo-style homes, or coffered ceilings to mimic the straight lines and symmetrical, repetitive patterns found in many Craftsman-style homes.

“Special ceilings belong in celebrated spaces of the house,” says San Antonio-based architect Craig McMahon, winner of five 2016 Pro Remodeler Design Awards, including one for Best Body of Work. “People generally want them to be taller, and ceiling height lets you add more volume to a space.”

Today, entry halls and stairways have joined kitchens, living rooms, and bedrooms as celebrated spaces in American homes. Parsons says the entry hall is a natural place for people to stop and take in their surroundings, and if you’re climbing a stairwell, you’re already looking up. “The square footage of the average entry hall ceiling isn’t that big,” he says, “but because it’s the first room of a house, the ceiling can have great visual impact.”

Florida remodeler Nathan Cross of NWC Construction, in Orlando, built an all-white, tongue-and-groove barrel ceiling entryway for a home in Sarasota. The barrel design reaches 10 feet at the high point of the arc before curving outward and down to the floor in one smooth line. 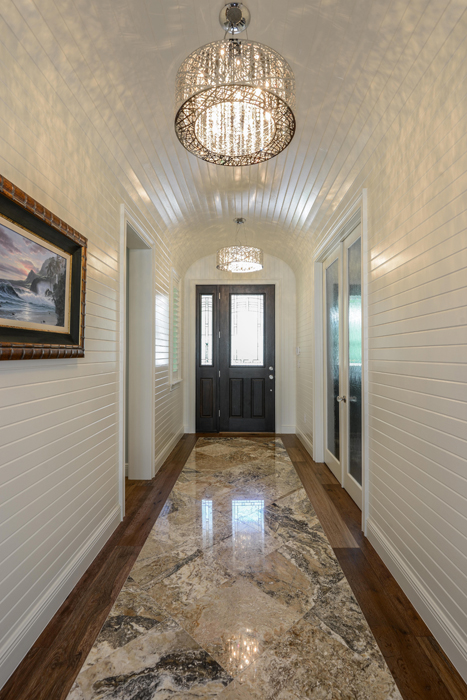 CBI Design Professionals built a groin ceiling for an elegant powder room off the main foyer of a Michigan home. The ceiling vaults were built using preformed suspended metal lath with plaster over them. Clarke says it took a great deal of skilled labor from a plasterer to create the smoothed shapes in such a tight space.

Architects such as Parsons, Clarke, and others say that figuring out what to do with HVAC, lighting, and mechanicals in existing homes plays a role in ceiling design.

Soffits can be a go-to solution for hiding ceiling beams or pipes that can be too costly to relocate. Some remodelers design soffits to occupy the space above kitchen cabinets, then trim them with molding to blend into the upper cabinetry. Other ideas include disguising the soffit as a beam or making it resemble the continuation of a sidewall to create a nook within the kitchen. Locating ductwork inside a soffit works especially well in single-story homes that have a central hallway flanked by rooms on either side. In a house with a more complicated floor plan, duct soffits can be built along the top of any wall.

By their very design, tray ceilings provide a trough around the room perimeter that can accommodate lighting, ductwork, and mechanicals. Linear diffusers that run the length of the tray can function as supply and return vents.

Coffered ceilings can be another good choice for hiding HVAC, electrical, lighting, overhead projectors, and speakers because the beams do most of the work.

Cross says that a client asked him to raise the existing 8-foot tray ceiling of a Sarasota kitchen about 8 inches. But after the demolition, the lack of overhead ductwork and mechanicals and the minimal electrical wiring convinced him he could vault the ceiling up to 14 feet.

Vaulted ceilings are a design hallmark for Craig McMahon whose designs make good use of on-demand water heaters, 6-inch flex ducts, and wall-mounted mini-split A/C and heating systems when little attic space is available. McMahon says he tries to vault ceilings whenever possible, even if it means intruding on attic space. “Homeowners can be a bit hesitant at first,” he says, “but when they see how much bigger a room will feel with a vaulted ceiling, they ultimately decide it’s worth the added expense.” 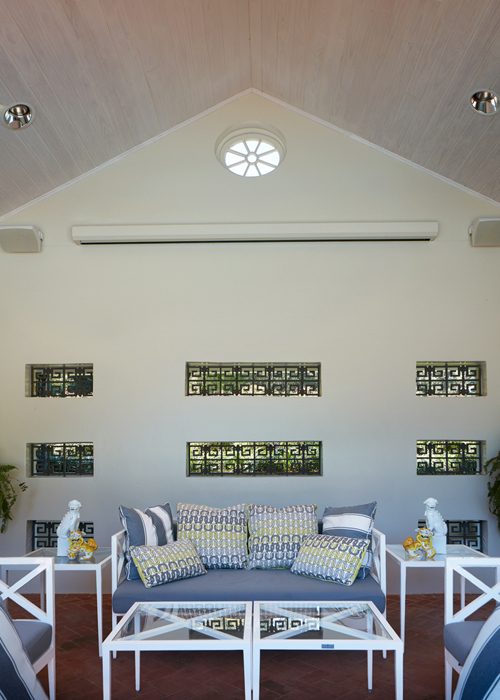 Clarke says that providing ventilation in vaulted ceilings can be tricky. The first, best option is to eliminate it altogether by using a thick layer of closed-cell spray foam directly under the roof decking. If the space is larger or can’t be isolated, he recommends whole-house attic fans to create negative pressure, or soffit vents with at least 1 inch of space between roof deck and insulation. Warm air is the enemy, especially in cold weather: if it escapes into the attic on a sunny, zero-degree day, the heat will melt snow on the roof, possibly creating ice dams.

New lighting products mean architects can hide lights in ceilings like never before. Smaller, thinner, and more flexible strips of dimmable LED lights or rope lighting can be tucked inside crown molding, creating a rim of cove lighting for a tray ceiling or a layered look in a coffered ceiling.

Gerald Olesker, a lighting designer in the Los Angeles area with more than 20 years’ experience, points out that good lighting should combine aesthetics with function. “If you have a room with a beautiful Venetian plaster wall,” he says, “you want to find ways to throw light onto that wall.”

Painting the recessed area of a tray ceiling in colors that match the wall can draw the eye toward an open space that makes it seem taller. Painting the inner part of a ceiling tray the same color as the walls creates a cozy atmosphere and helps visually lower the ceiling’s height. Applying color to the beams of a coffered ceiling tends to bring focus to the ceiling’s accent points, making the ceiling feel lower. The presence of natural and artificial light plays a supporting role. “Some spaces are designed to be peaceful, others are meant to be active,” Olesker says. “People will respond differently to a room based on how it’s lit.”

Cross says clients who want a special ceiling are looking to make a grand statement in their homes, and they should know that those statements don’t come cheap. He says a typical tray ceiling is relatively inexpensive compared with a coffered ceiling. The curves of a barrel or groin present added complexity and expense.

Cross says that remodelers who bid on such ceiling showpieces should be prepared to pitch new ideas to a client if the budget or parameters of the job change. He also points out that these ceilings require a considerable amount of craftsmanship. Even if it costs more, remodelers should resist the urge to bid out finish work to a subcontractor. “I’m still old-fashioned enough to believe that a good remodeler should have a finish trim crew,” Cross says. “There should be no visible joints anywhere except in the corners. Don’t be afraid to throw away wood. Aesthetics is the make-or-break-point of the project.” And Clarke, Parsons, and McMahon all agree that the best ceilings find ways to showcase structural craftsmanship in a way that evokes an emotional response. “People love quality and things that look well-made,” Parsons says. “They may not know why they like it, but they’ll know how it makes them feel.”