You’ve had clients like these: The ones who hid nanny cameras on the jobsite to watch your crews, or walked around during framing with a level and left orange sticky notes on the studs they wanted you to do over.

Some clients believe a remodeled house means a perfect house. If anything goes wrong, they’re always right. Working with these homeowners may not be in your best interest.

Choosing your customers can be part art and part skill, honed through years of wisdom learned from past mistakes. Intuition also plays a role. Some professionals say they can tell within an hour of meeting a prospect whether they will take them on or cut them loose.

For instance, Brian Bailey, of Bailey Homes, in Austin, Texas, says he will never accept a client that he wouldn’t want to invite into his own home. “If I’m around somebody that I wouldn’t enjoy having come over to my house to have dinner, then I wouldn’t consider them as a client,” he says.

Steve Bronstein, president of Cornerstone Homes and Design, in Riverview, Fla., activates his trust antenna when he meets prospects. “I have to determine how trusting the client is,” he says. “If there are inclinations that they are not trusting, I’m likely to bolt because my attitude is, if you show me that you don’t trust me, I know I can’t trust you.”

Dallas builder John Sebastian notes that when prospects interview him to determine whether they should hire Sebastian Construction Group, he’s also auditioning them. As Sebastian and his team meet prospects at their home, place of work, or at a restaurant, they’re watching how that person treats other people. Does he or she respect the receptionist, the help, waitstaff, coworkers? “How they treat their receptionist is probably how they treat everybody,” Sebastian says.

Follow your gut and don’t ignore the early warning signs. In other words, don’t overestimate your management ability to successfully smooth out a troubled relationship. “We used to think, long ago, ‘Oh man, that’s all right, we can fix this,’” says John Abrams, president and CEO of South Mountain Company, in West Tisbury, Mass. “Nothing could be further from the truth. If the indicators are there early on, they’re not going to get better. In fact, they tend to get worse.”

Hensley took on difficult clients that he concluded were irrational or had a chemical imbalance. “If you have a person who turns from Jekyll into Hyde in a short period of time,” he says, “that’s a recipe for disaster because it’s going to occur over and over.”

From the outset, don’t be remiss in asking prospects tough questions. Delve into their finances. If they’re borrowing, who is their banker? If the project is a cash deal, ask for proof of funds. Find out who is the decision maker, and if you’re dealing with a couple, ask the spouse or partner if they’re OK with the other person calling the shots. “If that looks iffy, you’ve got a problem,” Bailey says. “I’ve seen couples who have been married for 25 years and don’t get along at all but at the end of the day, they are going to come after you together and say you didn’t do something right.”

Bailey warns that if one spouse or partner is disengaged, that could spell trouble, too. “We’ve seen it happen where a wife is really engaged but there isn’t good communication with the husband,” he says. “When it breaks down, it’s usually over money and change orders. The result is that couple is going to be fine, but you’re going to be the scapegoat. The husband feels he didn’t know about [the expense] even though she approved it. She’ll take his side, and he’s going to come after you.”

Ask prospects if they’ve done a major home remodel and what that experience was like. If they had a negative experience, seek details to determine if their story is reasonable. “If they’re bragging about suing their last [contractor], I’m out of there,” Abrams says. “If they level with us about a bad experience, I like that honesty, but it depends on the story.”

While personality and attitude—rather than profession—are more a determinant of a difficult client, the sources we spoke with did offer generalizations about working for people in certain careers. Engineers were mentioned most often as being demanding to work for, followed by commercial real estate developers. With regard to the latter, Sebastian says, “We run the other way because [people in commercial real estate] always know a way to build it cheaper and faster. In their mind, they are so much smarter than you and can’t understand why the cost of residential construction is so high.”

Of the pro athletes and entertainers who cross a remodeler’s radar, opinions were mixed. The upshot: B-list celebrities can be fun to work for because the contractor most likely will be dealing directly with the client. But clients who are very famous can be tough customers because there will be layers of employees between remodeler and client. Bailey experienced this on a project for a movie actress.

“I stopped the project in the early stages and said, ‘This can take as long as you want it to, but give me a date for when I can meet her. I will have my list ready, and I want her answering these questions directly to me. I don’t want to go through anyone else.’ Stuff gets lost when a client goes through other people,” he says. “I won’t do it.”

Doctors can be challenging clients because they work in settings where they give orders to nurses and medical technicians. No one tells them what to do. Yet doctors are at the top of Hensley’s list of favorite homeowners because they understand that, although they’re good at what they do, the remodeler is the expert in home construction.

Perhaps counterintuitively, attorneys tend to be OK, as well. Abrams has found that his lawyer clients appreciate a simple contract that means what it’s supposed to mean. In fact, some of his attorney clients have helped him refine his own contracts. It’s non-lawyers who think they are lawyers and nitpick that are dangerous, Abrams says.

“One thing we find is that people who are really accomplished and good at what they do really make good clients because they don’t pretend that they can do our job,” he says.

Unfortunately, remodelers can’t always recognize the clients from hell during the initial meeting. Red flags may not pop up until deep into the remodeling process. Even if the outlay in time and money spent on planning is significant, don’t be tempted to stick it out and hope there will be a return on investment down the road.

“Sometimes you’re better off sitting in your office with no work to do than taking on a [really bad] client,” Bailey says. “If they want to do this together, we can do that. But if I don’t like them, and they’re not the kind of people we can communicate with, well, life is too short.” 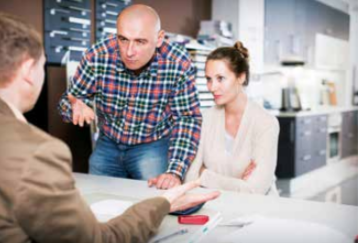 5 Ways to Get in Front of Conflict With Problem Clients

1] Explain to potential clients why it’s in their best interests to hire an experienced, reputable remodeler who can give them personal attention, rather than accepting the lowest bid.

2] Make sure clients understand how the remodel is going to affect their lives. Walk them through the entire experience before construction starts and frequently communicate with them, providing regular updates once the work is underway.

3] Allow clients with cost-plus contracts to review your books on a regular basis while the project is being built.

5] Include a clause in the contract that stipulates what will happen with the project in the event of an unforeseen development with you or the client, such as death, divorce, or job loss.

—Adapted from an article that originally appeared in Custom Builder by senior editor Susan Bady.

Mike Beirne is a senior editor with Professional Builder and Custom Builder magazines. This story is adapted from an article “Vetting Your Prospects,” which originally appeared in the Summer 2017 issue of Custom Builder and is available online here.