Do you have a great idea that will satisfy the appetite of a hungry market? Four remodelers show what it takes to make that vision a reality Thomas Edison reportedly said that genius is 1 percent inspiration, and 99 percent perspiration. As a prolific inventor with more than 1,000 patents to his name, he would have known. The remodelers-turned-inventors profiled here have all lived Edison’s adage. They each had an Aha! moment, followed by years of sweat equity and tens of thousands of dollars of investment. Most had no idea of the persistence it would require to bring their dream to market.

None have any regrets about their decision, and all plan to develop additional products or are already doing so. It seems that once you catch the invention bug, it’s tough to shake it.

Colchester, Vt., contractor Eric Kurtz has been in construction all his life, including stints as a U.S. Navy Seabee and a pipeline welder. Today he and his wife, Laurie Goldstein, manage a local design/build remodeling business, where Eric focuses on computer-aided design.

Those skills came in handy when he came up with the idea for Smart-Bracket Staging, an OSHA-compliant wall and rail bracket system. “I just opened my laptop and started designing it in CAD,” Kurtz says. “Then I went out to the shop and started welding.”

He conceived the product as a time-saver. “With a conventional bracket, you have to drill through the wall, you need a guy on the inside to tighten the bolt, and you only get a 250-pound rating,” Kurtz says. “With Smart Bracket you can hook it over the top plate and be done.” Each bracket is rated for 500 pounds.

The first version was too heavy, so Kurtz had to scale it down. Doing so halved the manufacturing price. After talking with potential customers, he reengineered the bracket so that it can be raised to serve as a catch platform at the edge of a roof. When combined with rail brackets on the plank and eaves, this relieves roofers from the need to wear harnesses. Other ideas are also in the works, he says. “I’m going to keep looking for ways to make jobs safer.”

What it is: Smart-Bracket Staging

This OSHA-compliant staging system includes wall brackets that hook over the top plate to provide support for standard aluminum staging planks, and railing brackets that hook onto the planks. A pair of brackets is load-rated at 1,000 pounds. smartbracketstaging.com 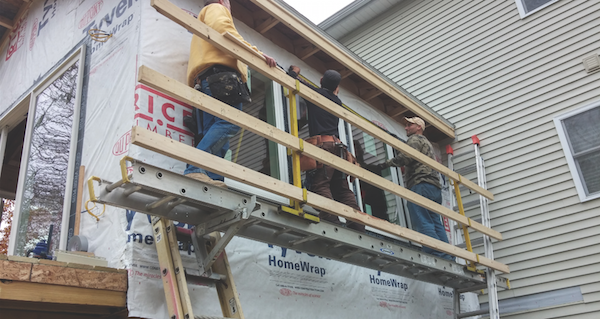 Frank Notaro’s brainstorm was a plastic bracket for framing soffits without dimensional lumber. Although he believed it would find a receptive market, the Long Island architect couldn’t afford to walk away from his thriving design/build business, and he lacked the needed engineering and injection-molding knowledge. 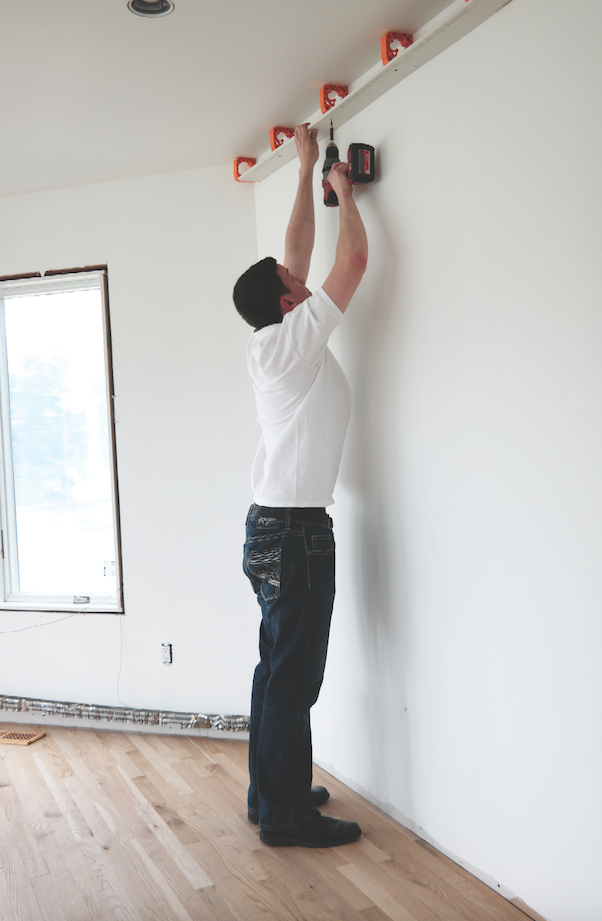 Fortunately, his son is a rocket scientist. “I’m an aerospace engineer by education,” Sam Notaro says. “I left my PhD program to pursue Simpliframe full time.”

The two men spent two-and-a-half years getting from initial concept to final product, with several iterations. It started as an inflexible block of solid plastic; it ended up as an interlocking modular system.

The Notaros’ main advice to inventors is to carefully guard their intellectual property. “File a provisional patent right away, or risk losing your international patent rights,” Frank advises. “You will have a year to file a full patent.” When talking with potential manufacturers and other business partners, they also require a nondisclosure agreement. “It’s a critical document that stands up in court,” he says. One way to find an attorney is to network with other inventors. The Notaros belong to the Suffolk County Inventors Association, and two or three patent attorneys usually show up for the meetings.

Like all the inventors we spoke with, the Notaros chose a local manufacturer for their first products. “We made close to 100 changes,” Sam says. “We were constantly on the phone with the manufacturer and had to visit quite a bit, so having them close by made it a lot easier.”

As for marketing, they say that it’s important to understand that most remodelers want to touch and feel a new product before buying. That’s why the Notaros connect with their market by exhibiting at trade shows and visiting lots of lumberyards and contractors. “We carry a suitcase with product samples and 3-foot high columns,” Sam says. “This gives people a chance to try it.”

Frank has a notebook with about 200 invention ideas in it but he and Sam have also tuned their antennae to unexpected opportunities. “Someone came to our trade show booth and asked if he could use Simpliframe to enclose a lally column,” Frank recalls. “We hadn’t considered that, but Sam ran over to the lally column booth and it fit. So we came up with a package for that application."

Supplied in kits, these modular, interlocking plastic parts can be assembled into a variety of configurations and used to frame a soffit, wrap a column, or support and enclose plumbing pipes or HVAC ducts. It’s cleaner and quicker than dimensional lumber and leaves a smaller profile. simpliframe.com

Simpliframe started as a solid piece of plastic and, after more than 100 changes, evolved into a snap-together modular system.

Doug Lethin believes remodeling experience is good background for an inventor. “As a remodeler I have always been solution-oriented,” he says. “So when I looked at the contraptions people use as patio covers, it wasn’t difficult to imagine a better way.” The result was SkyLift, a steel riser bracket that elevates the patio roof well above the surface of the main roof. 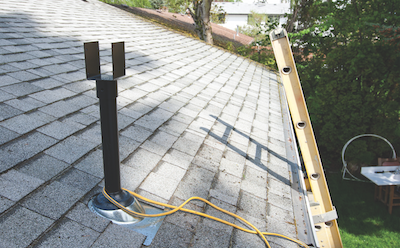 Lethin is on the State of Oregon Structural Board, so he knows a lot of building officials. “They were encouraging,” he says. It only took a month to get from concept to the first prototype, but an engineer who looked at the prototype pointed out some possible issues with seismic and lateral loads. “He helped me design a heavy-duty version, which I then prototyped again.” The final product was tested for lateral loads and uplift at Oregon State University.

Marketing has proved to be the biggest challenge. Although Lethin understands the distribution system and the required margins—he once managed a hardware store and lumberyard—he met some initial resistance from both contractors and dealers. He says that several dismissed the product at first, but came around after seeing how simple it was to install.

Lethin’s approach to marketing is to make lots of connections and to talk with lots of people—what he calls “sowing seeds.” “I’m constantly calling contractors, lumberyards, and others in the industry,” he says. The secret to getting a receptive ear is to start the conversation as a question. “I’ll [call the lumberyard and] ask if customers have asked about alternate ways of building a patio cover,” he says. The answer is usually yes, which starts a conversation. “Once they go to my website, they see SkyLift as the solution.”

Lethin’s advice to would-be inventors? “Be patient and persistent. Find an adviser who challenges you rather than just agreeing with you.”

He’s also a believer in reaching out to fellow inventors. “When I see their products in industry publications, I call them up. At first they’re kind of shocked, but then are really open to talking with me."

What it is: SkyLift Roof RIser Hardware

The SkyLift is an alternative method for attaching patio roof framing to an existing roof. The hardware consists of a riser tube welded to a mounting bracket that is fastened to the top plate of the main house framing, After flashing the riser with a standard pipe boot, the saddle slips over the top and is bolted into position to accept the patio roof framing. skylifthardware.com 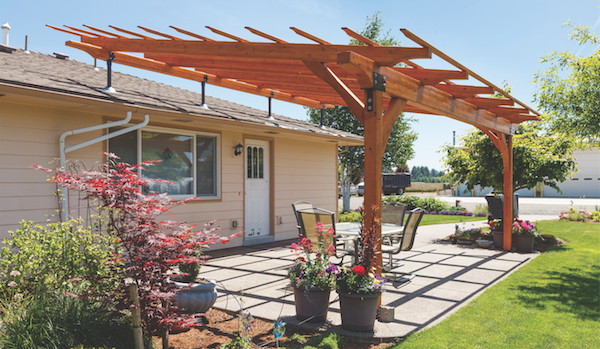 Once Michael Lueck was convinced that his Mosely Infinity Level would be a winner, there was no turning back. “We sold our home and invested the equity,” recalls the former San Jose, Calif., contractor and building inspector. The plan was to move the family to a less expensive city, until the stars suddenly aligned. “There are no rental homes in the Bay Area for less than $3,000 per month, but a friend found us one for $1,900.”

The idea for the Mosely (named after Lueck’s young son) Infinity Level came to Lueck while he was watching his tile installer. “I wanted to find a faster way to level the courses on adjoining walls,” he says.

The biggest surprise was the number of setbacks. Lueck and local machinist Russ Borg—who Lueck credits as co-inventor—built early prototypes by putting custom-milled connectors on the ends of standard levels, but after a year of work, the tolerances still weren’t tight enough. “Some people told me we would never get there,” Lueck recalls. But he and Borg worked closely with a local manufacturer to refine the design.

At one point, the money ran out and things stalled for six months. “Then my father-in-law came in as an investment partner,” Lueck says. In April 2015, three years after he got the initial idea, the company started taking pre-orders. The first levels will ship this month.

The next challenge is to reduce manufacturing costs. The eventual goal is for the company to own a CNC machine, but that may have to wait until sales are strong enough to support a bank loan or attract a manufacturing partner. But Lueck is not waiting to push ahead. “The biggest mistake I made was doing nothing for months while I had no money,” he says. “Then when my father-in-law came in it took another two months to get restarted.” Now he’s actively looking for investors. “It doesn’t cost anything to talk with people.”

What it is: Mosely Infinity Level

This is a modular system of 1- and 2-foot spirit levels that can be linked together end-to-end or at 90-degree angles in two dimensions. When fastened to a wall (while installing cabinets, for example), the bubbles can be adjusted to level with built-in cam knobs, then serve as a temporary ledger. infinitylevel.com 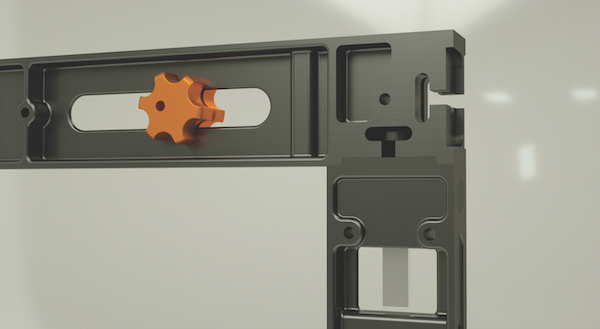