The walls are bare, the room empty, except for a family of three standing in the center, each with paintbrush in hand. It’s quiet. They’re thinking. The family—a dad, a mom, and little girl—are asking themselves: “What do I want out of this room?” When they figure out the answer, they’re going to paint it on the wall.

“Intention” is one of the first things Mina and Mark Fies, the owners of Synergy Design & Construction, in Reston, Va., explore with clients before they start working on any given space. They want to understand the intention for the room—and not just what’s on the floor plan. They don’t want to know a kitchen is going to be a kitchen. Instead, they want to learn what each individual family member hopes to get out of the space. It’s just one part of Synergy’s process, but is also a representation of the company’s approach to home improvement: an unapologetic response to what the Fieses see as a larger cultural shift toward mindfulness.

Synergy is building a business around that vision, and so far, it’s working.

By most measures, it’s a successful company. And while a more traditional remodeler may frame that success as an “in-spite-of-their-quirks” achievement, there’s a strong case to be made to the contrary: that Synergy’s success is more a product of its uniqueness than anything else.

To understand the company’s culture and approach, it’s imperative to know a bit about its owners, especially Mina Fies, whose whole life, it seems, has been building toward founding Synergy. “It started with the way I was raised,” Mina says. “My mother was a hippie and a long-haul truck driver, and I moved eight times before the age of 10.”

It wasn’t until later in Mina’s childhood that she became acquainted with stability, and in the same way winter can make you appreciate a blanket, Mina’s leaf-in-the-breeze upbringing left her with a deep gratitude for the concept of “home.”

“There’s just something about helping people—not just the homeowner—love their home,” she says. “I want a teenager who’s going through their awkward years to love their house and be able to come home, go to their room, and shut the door and feel safe going through whatever they’re going through.”

Then there’s Mark Fies. He’ll tell you he’s the analytical one. To give you an idea of what that means, he lists “spreadsheets” as one of his passions. “I completely enjoy doing what most remodelers hate,” Mark says. “I like to under-stand the finances of the company and how to run it as a healthy, strong business.”

In addition to spreadsheets, Mark thrives on managing people and embraces the challenge of finding and retaining talented staff amid a labor shortage.

When the Fieses started their business in 2008, the U.S. was about a year into one of the worst financial meltdowns in its history, and the Fieses were three months into their marriage. They weren’t sure what approach their business would ultimately take, but it was clear the pair was driven by a shared understanding that a culture shift was taking place across the nation.

“I’m really big into energy and how it affects everything in our lives,” says Mina, as part of her explanation as to why enjoying the remodeling process is so vital to Synergy’s approach. “If you walk into your kitchen and it’s beautiful, yes, that’s great. But if the process was bad, you still have in the back of your mind, ‘That was pure hell. I’m glad we got through it, but I’m never doing that again.’” That residual negativity is what the Fieses aim to avoid with their approach to remodeling. They loosely call it “interior alignment”: “You can call it alignment, you can call it having fun,” Mina says, “but our overall approach is to make sure our clients are continually feeling renewed with the process.”

That’s not to say there isn’t a strict definition of the term. There is. Conceived by New Age writer Denise Linn in the mid-’90s, the practice is a marrying of feng shui and space-clearing concepts, intended to help tap into the uniqueness of the people living in a space and leverage that to not only empower the residents, but also their dwelling. Mina, who is a Denise Linn–certified interior alignment practitioner, is careful to make sure homeowners understand that the specifics of interior alignment have little to do with the practice itself. For Mina and Mark, interior alignment is an overall guiding principle for improving the way people feel in their home.

“It starts off with the rudimentary step of ‘Let’s make sure that what we’re going to provide is exactly what the client is hoping to get out of this,’” Mina says. “And then it’s making sure our visions are aligned throughout the process.”

By removing the pony walls and installing new cabinets, appliances, and a large island, Synergy crafted a lighter, more open kitchen for the homeowners.

Intention painting is first mentioned during the initial design meeting but takes place shortly before the project is painted. Mina, Mark, and the designers prep each of the home’s residents with a challenge: Articulate your intended purpose for the room by painting it on the room, via Synergy-provided paint and brushes. And what do people paint? According to Mina, it’s most often words like “family,” “love,” and “abundance”—basically one-word narrations of the cultural shift the Fieses see happening nationwide.

Intention painting serves to focus the family and get them talking to one another about the remodeling process. In turn, they become more involved. “It’s a way to get the family excited about the project. It’s a great conversation starter,” Mina explains. “If there are teenagers or kids living in the house, you never know what their intentions for that space will be.”

Space clearing is a bit different, though similarly off kilter. Traditionally a process some use to revitalize a building’s energies, Mina and Mark also see it as a way to leave families with a sense of serenity. “It’s like you’ve let us into your home for two or three months, we’ve done all this work, so instead of just saying, ‘Here are some balloons and your keys back,’ we clear the space and let you say a few words about what the finished room means to you,” Mina says, adding that what the space clearing ritual ultimately entails depends on the particular client. It could be something as small as a moment of reflection, or as involved as ringing bells while Mina walks the room with a feather, fanning smoke from a bowl of smoldering sage (a Native American practice known as smudging).

Mina and Mark both admit, to no surprise, that not all clients are inclined to pick up the feather and start revitalizing their bathroom’s energy. In fact, some refuse to participate at all. But at the same time, the duo has also been surprised by the willingness of some clients—who upon first meeting may not have “seemed the type”—to join in, including one who initially appeared uninterested but then rushed to get his Tibetan singing bowl when the topic of space clearing came up.

But regardless of the homeowners’ approach, the underlying intention on Synergy’s part is the same: “The home-owner is always going to have that past experience they connect with the room,” Mina says. “It’s unnecessary for it to be a bad one.” 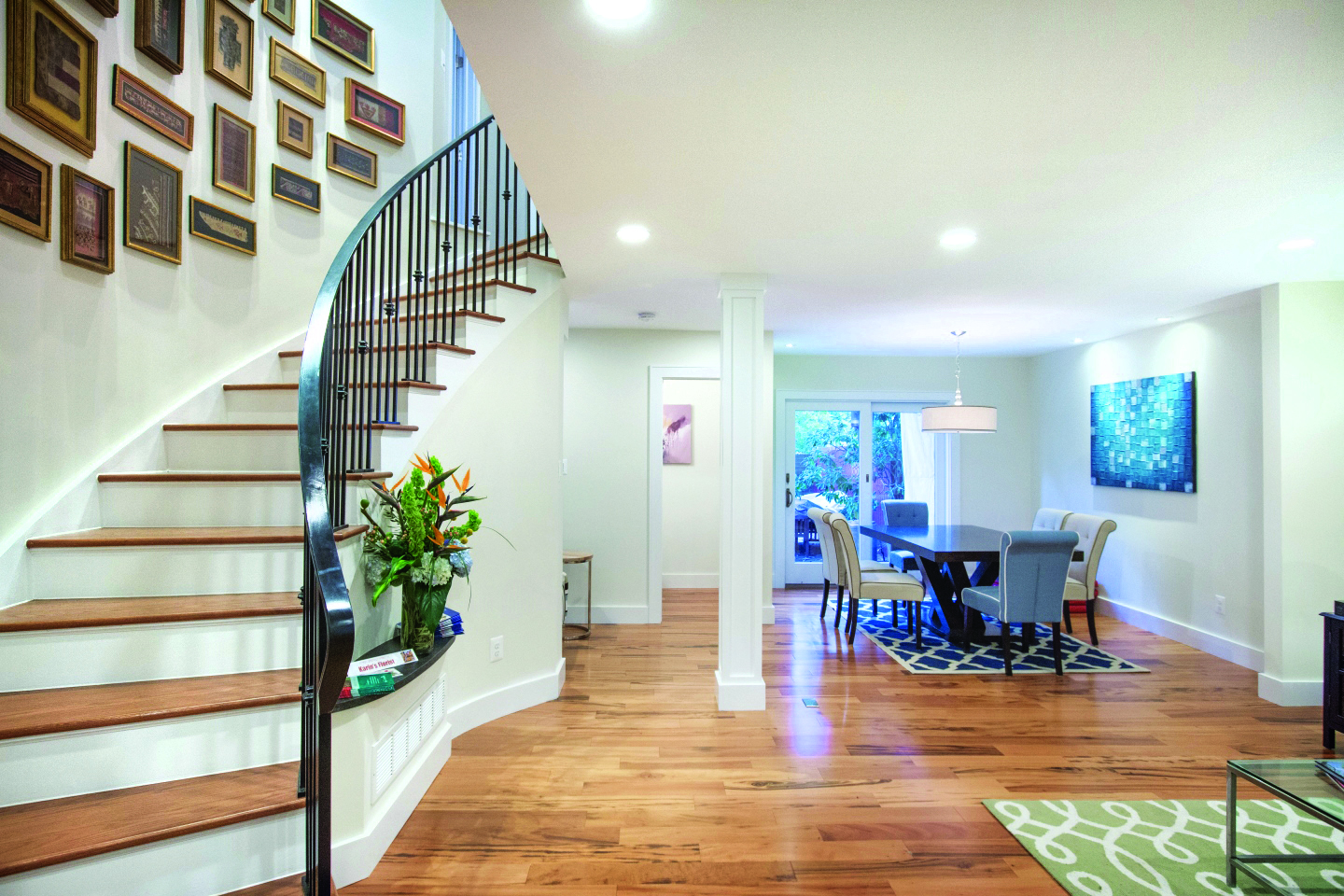 As part of a whole-home renovation in Reston, Va., Synergy Design & Construction knocked down two walls to open up and connect the home's first-floor dining and living rooms.

Synergy expects its revenue to grow by 15 percent in 2017 and currently is hiring a project manager and two additional lead carpenters. The company is also planning a business venture that, if successful, will add a digital emphasis to the alignment concept.

It’s called Renovation Roadmap, and Mina explains it as an online, subscription-based platform designed to take the mystery and fear out of remodeling. More specifically, it’s an ambitious scaling of Synergy’s process.

The service, which is still in beta testing, will include a guide to hiring contractors, avoiding budget pitfalls, and basically navigating each stage of a remodel, from design to construction to closing, as well as an outlet to ask Mina and Mark questions. There will be an online-community component as well, where people from around the country will be able to exchange advice, photos, and anecdotes from their own remodeling experiences.

“This empowers homeowners to understand the process,” Mina says, which is important because, as she sees it, a more proactive and informed homeowner is a more understanding client.

One thing that Mina and Mark are careful to point out is that Renovation Roadmap isn’t intended for DIYers. It’s being designed to make the language of remodeling more familiar to homeowners so they can better work as a team with their contractor, as opposed to being adversaries—a dynamic that Mina says too often is the reality.

“It’s made so a homeowner can be a partner with their contractor,” Mina says, adding that in phase two of the development of Renovation Roadmap, remodelers will be welcomed into the online community section of the site. “Once we get those two communities speaking the same language,” she says, “we’ll be able to truly make a difference.”

“I think our culture is getting to the point where a job title and what car we drive isn’t providing the fulfillment it used to,” Mina says. “People want more in their lives, and that … goes into your experience with a renovation.”

Mindsets haven’t always been that way, though—at least not in Mina and Mark’s world. The swelling of the social conscious, as they see it, didn’t start picking up speed until after the Great Recession. The Fieses look at that period following the downturn as a turning point, where economic turmoil galvanized the population into adopting new, more mindful and compassionate perspectives. And that was particularly true for homeowners, who, in many instances, were hit the hardest.

“Following the Great Recession, we found homeowners had shifted their focus from finding or building their next home—the bigger and better home—to asking themselves, ‘How can I improve the home I have?’” Mina says.

The Fieses’ observations are especially true regarding new-home construction, which saw spending from peak to trough fall by 60 percent, compared with home improvement spending, which fell just 13 percent, according to Harvard University’s Joint Center for Housing Studies. Today, annual homeowner spending on remodeling and improvements has ballooned into a $300 billion industry—well above the norms of the early 2000s.

Mina and Mark have also found that homeowners today are less focused on when they can sell, and instead want to gain more enjoyment from their space. “I think the recession helped homeowners connect better with what they love about their homes,” Mina says. “It helped give them confidence to truly invest in their home, rather than trying to move up.”

And that’s all to the benefit of Mina and Mark, who would rather a person think of a house as a home as opposed to just an investment. It’s why they vet clients before committing to a project. They’re not looking to spruce up a family’s kitchen so the asking price can rise by $10,000; they’re in the business of designing and building safe, comfortable spaces where moms, dads, sons, daughters, grandparents, dogs, cats, and whoever else may consider the space home, can find that happiness, abundance, or family time they described when first setting their intention for the remodel.