What is flesh-sensing technology, how does it work, and will it become the new standard for power tools? The statistics are grisly. Ten people lose a finger to a table saw every day in America, according to  the U.S. Consumer Product Safety Commission. Table saws are behind 33,000 emergency-room visits per year. The reported societal cost is more than $2 billion annually, and that doesn’t include intangibles such as ongoing pain and loss of functionality.

The reason is simple: The teeth of a table saw blade travel as fast as 142 mph, with cut capability taking micro­seconds. It requires about 88 joules, an international unit of energy, to break a human arm; that’s just 5 percent of the stored energy in a typical saw blade and motor.

Those statistics may feel more real to someone who has had a direct, and horrifying, encounter with that spinning blade. Curtis Harper, a Provo, Utah-based cabinetmaker, had 20 years’ experience with power tools and describes himself as “very safety conscious.” Yet one day while clearing a piece of scrap from his 10-inch saw, the blade caught the wood and pulled in his hand, ripping a 1/2-inch deep furrow through the palm.

“I felt my hand go in,” he says, “and I thought ‘This  is going to be bad.’ I couldn’t even look for about  15 seconds.” The blade cut vertically down the full length of Harper’s hand between pinky and ring finger, severing tendons, ligaments, and nerves. The doctors tried, but were unable, to save his finger. Though the accident occurred in 2006, Harper says, “I get shots of pain through my hand to this day.”

As a precaution, before going back to work, Harper purchased a saw equipped with an electronic flesh-sensing feature. Had he been using it at the time of the accident, the technology would likely have left him with only a minor scratch. But while these products are by all accounts effective, they’ve fueled controversy since their inception. Flesh-sensing innovations have been at the center of legislative battles, multimillion dollar lawsuits, and an ongoing patent-infringement case.

As more such products hit the market, remodelers  will likely feel pressure from regulators and insurance providers to use tools equipped with this capability. To that end, it’s crucial that industry members understand the stakes involved, how these products work, and their strengths and limitations.

For more than 130 years, table saws have been used in woodshops. An 1885 catalog from the W.F. & John Barnes Co. depicts a hand-powered “Circular Rip Saw” containing a circular blade, steel table, and a  rip fence—all the basics of a modern table saw. Manufacturers have since added motors, housings,  and other improvements, but the core concept  hasn’t changed: a spinning blade fixed within a waist-high table through which the material to be cut is pushed. Today, it’s estimated that there are nearly 10 million operational table saws in American homes and businesses.

Table saws are generally used for two functions: crosscutting and ripping wood. When crosscutting, the material moves through the blade widthwise, across the grain, while ripping denotes that the workpiece is sliced lengthwise, along the grain.

Over the years, manufacturers have added safety enhancements, primarily in the form of riving knives and blade guards. The riving knife is a stationary section of curved metal or plastic positioned behind the blade, and combined with toothed metal plates called “pawls.” Riving knives are designed to prevent kickback accidents.

Kickback occurs when, as the wood is ripped, tension within the material causes the two halves of the cut to twist or warp. The pressure created can narrow the kerf, or width of the cut, squeezing the two halves against the blade. In rare cases, the blade slows or jams; more commonly, it lifts the workpiece and propels it, often with great force, back toward the user. Kickback can cause serious harm, including cuts, eye injuries, and even broken bones. Riving knives ensure that the kerf width remains constant, preventing the blade from becoming trapped in the wood. They’ve been required equipment on all UL-listed table saws since January 2014.

Blade guards position a user’s hands away from the spinning metal, and although the guards are effective as a safety feature, remodelers remove them on many jobsites. Professionals, as well as hobbyists, often complain that it’s impossible to perform a variety of  operations with the guard in place.

According to the CPSC, nearly 67 percent of the injuries from table saws in 2007–2008 occurred on units that didn’t have a blade guard attached.  In 75 percent of those cases, the consumer had removed the guard. Moreover, an estimated 23,800 injuries were caused by kickback, including instances where the user’s hand “was pulled into the blade, resulting in a laceration injury or amputation,” the CPSC says. 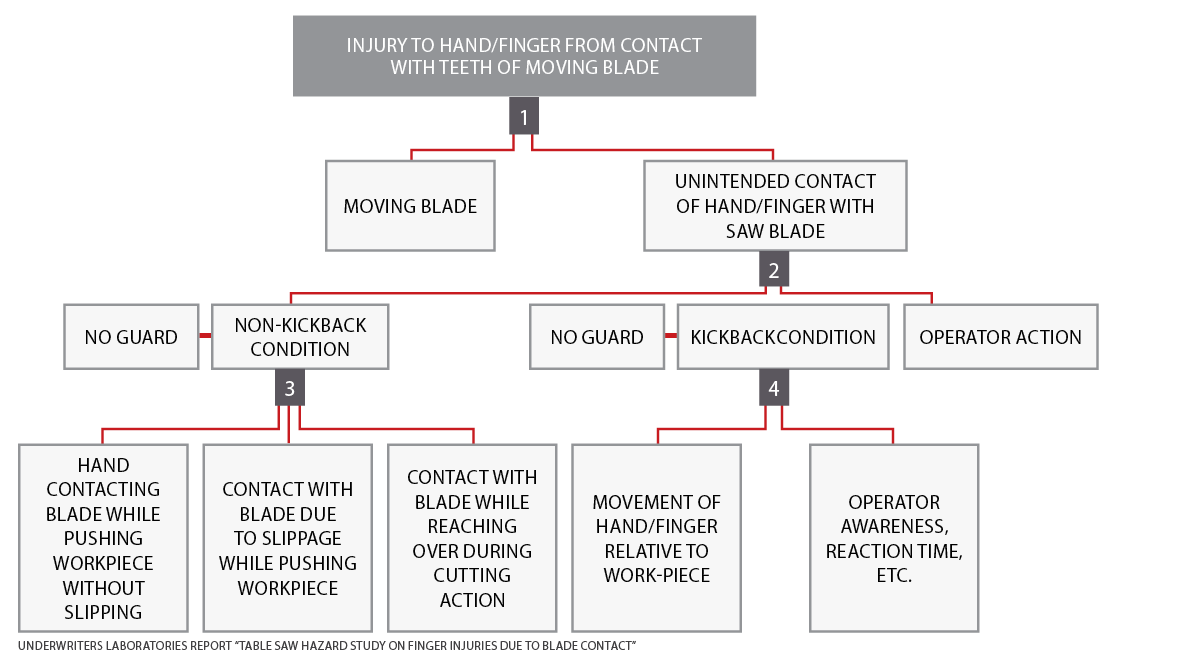 Brandan Carrell is a physical therapist in Mequon, Wis., and a lifelong woodworker. He was seriously injured seven years ago when a table saw ripped through the knuckles of his right hand. After a complicated series of reattachment surgeries, he’s still missing half an index finger and has limited functionality in three others. Today, Carrell commonly treats victims  of accidents similar to his.

Curious about what happens at the surgical table for table-saw related injuries? Read "A Clean Cut."

“I have met 60 or 70 people with lost digits,” he says. “Many of them were experienced, and none thought it could happen to them. But it only takes a momentary lapse in judgment, which anyone can have.”

Steve Gass, a physicist, attorney, and woodworker, founded SawStop in 1999 based on a patent for a unique system of active injury mitigation. He refers to it as “an air bag for saws.” The system combines electronic flesh-detection technology with an aluminum brake positioned 1/8 inch from the teeth of the spinning blade. The brake is connected to a 150-pound spring secured by a lever. Attached to the lever is a stainless steel fuse wire just 21/2 times the diameter of a human hair. 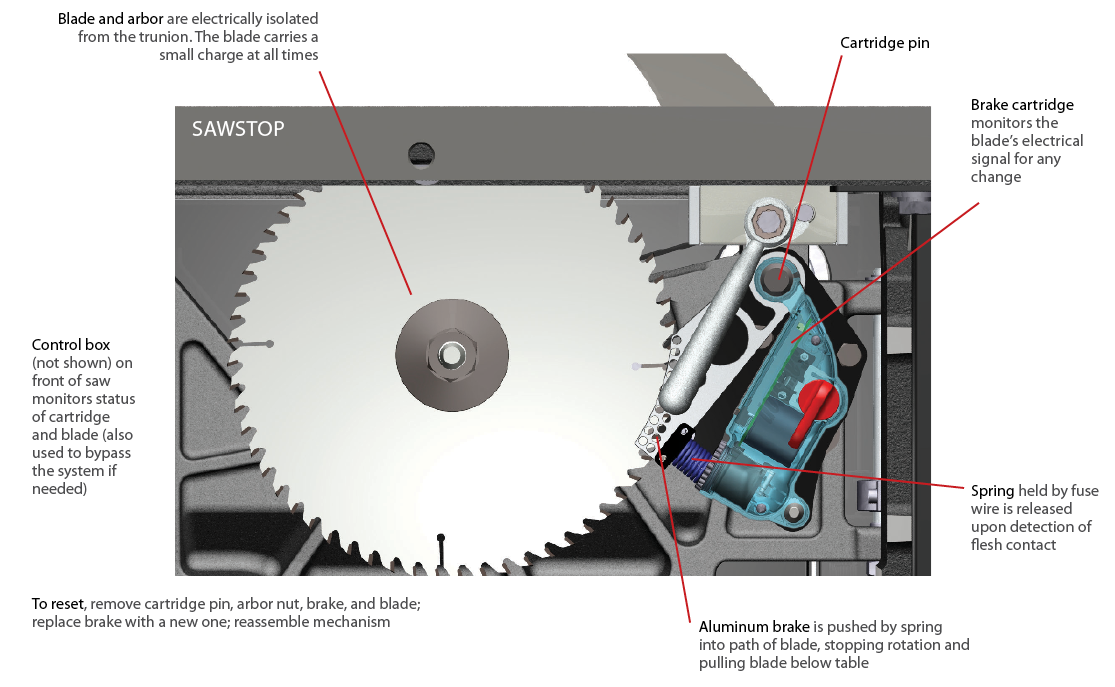 Switching on the power charges the blade with a 3-volt signal, monitored by a digital signal processor. Human flesh has a certain degree of natural conductivity, and if a body part, such as a finger, comes into contact with the spinning blade, it immediately absorbs a portion of the metal’s charge, causing the voltage to drop by approximately 20 percent. The processor senses this drop and triggers a charged capacitor—an electronic component that stores an electrical charge—which releases a 1,500-amp surge of current that destroys the fuse wire. This simultaneously shuts  off the motor and releases the pin restraining the spring, which then hurtles the brake into the blade  with close to 150 pounds of force. The blade stops with a metallic thud, and the accompanying momentum forces it to retract below the table.

The total time elapsed from flesh contact to  cessation of motion for the blade is 3 to 5 milli­seconds. The brake, and sometimes the blade,  requires replacement after a trigger event, but  according to Gass, the system’s activation doesn’t damage the saw motor.

Gass originally hoped to license the technology to table saw manufacturers, but in 2004 the company launched its own line of saws and has sold more than 70,000 units to customers ranging from industrial and cabinet shops to trade schools.

Accidents Happen: Here's what to do when you or someone you know has been injured by a table saw.

Bosch’s system also features a low-voltage electrical signal that’s imparted onto the blade. The signal alters upon contact with skin. Rather than stopping the blade with a brake, the Reaxx relies on an activation cartridge—two 3¼-inch-long metal cylinders. When the signal changes, an electrical component initiates a chemical charge in the activation cartridge, similar to the technology used to deploy air bags in cars. That chemical charge creates enough force to push a piston connected to a drop arm, which moves the saw blade down and away from the operator. 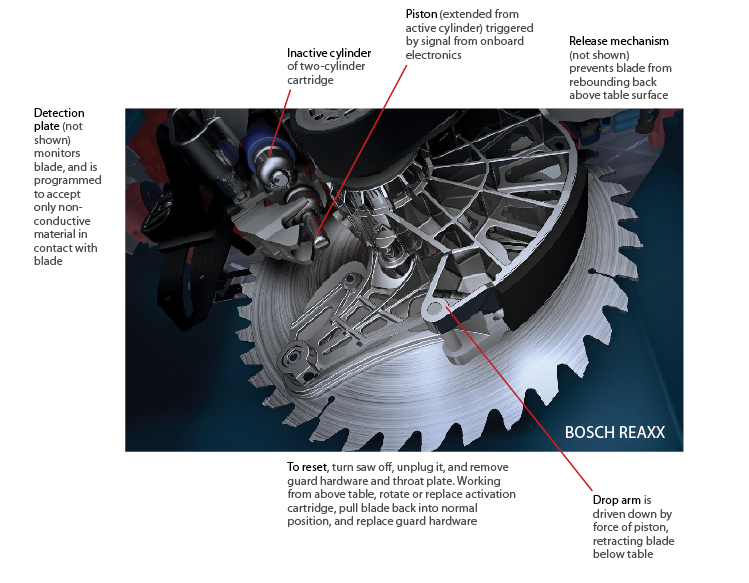 One advantage to Bosch’s approach is that activation of the system doesn’t damage the blade. Another is that because the activation cartridge holds two cylinders, it can fire twice before it needs replacing.

See You in Court

It didn’t take long for SawStop to react to Bosch’s announcement of the Reaxx. On July 16, SawStop filed a complaint with the International Trade Commission claiming that Bosch had infringed on a half-dozen of its patents. The complaint asks the court to prevent Bosch from “importing, selling, marketing, advertising [or] distributing” the Reaxx in the U.S.

Bosch’s voltage-sensing technology isn’t the  issue, according to Gass. What he objects to is the company’s use of the concept in combination with other technologies to stop the blade, an innovation that he says ends up looking too much like SawStop. “It’s a single-use device that triggers an emergency reaction,” Gass says.

For its part, Bosch denies infringing on SawStop’s patents. “[The Reaxx] is based on patented innovations done by the Power Tool Institute with advanced development conducted by the engineering team at Robert Bosch Tool Corp.,” said company officials in a statement.

Some injured table-saw users have successfully pursued a lawsuit against major manufacturers. Read "A Question of Liability" to learn more.

In the meantime, an ongoing CPSC effort could change the way power saws enter the market. Current safety standards, developed by a group of manufacturers, call for a permanent riving knife and a modular blade guard system. However, since users frequently remove the guards, some say that those features may not provide real protection against injury.

As part of an investigation, the CPSC commissioned a survey of end users to learn more about how professionals and hobbyists interact with table saws. The study looks at when the blade guard is removed and the types of cuts that are being made without the guard. Data collection is now complete and the results will be examined in conjunction with other research to help determine whether a new performance safety standard is needed.

Whatever the outcomes at the ITC and CPSC, Bosch’s Reaxx launch indicates that major manufacturers want to test the market for safer saws. The biggest brake on sales will likely be the fact that these saws are priced about three times higher than conventional models. If manufacturers can bring that price down enough, they could find an enthusiastic reception among remodelers.