Replacing an Eyesore of a Door

Amy Dellentash entered The BILCO Company’s Ugly Basement Door contest because she wanted to improve the unsightly door that had been installed when her New Jersey home was built in the 1950s.
When contractor T. Wolf delved into the project, he discovered the door was much more than an eyesore.

Wolf installed a new BILCO basement door at Dellentash’s Cape Cod style home, where she lives with her husband and three children. Dellentash won the contest in a vote carried out on social media. Peeled paint contributed to the door’s unsightly appearance, but more importantly, Wolf said, the door had become a safety concern and there was even some rotting of the housing. The new door includes a powder coat finish, which provides a durable, weather-resistant coating. The coating is tougher and chip-resistant, providing both a decorative and protective finish. 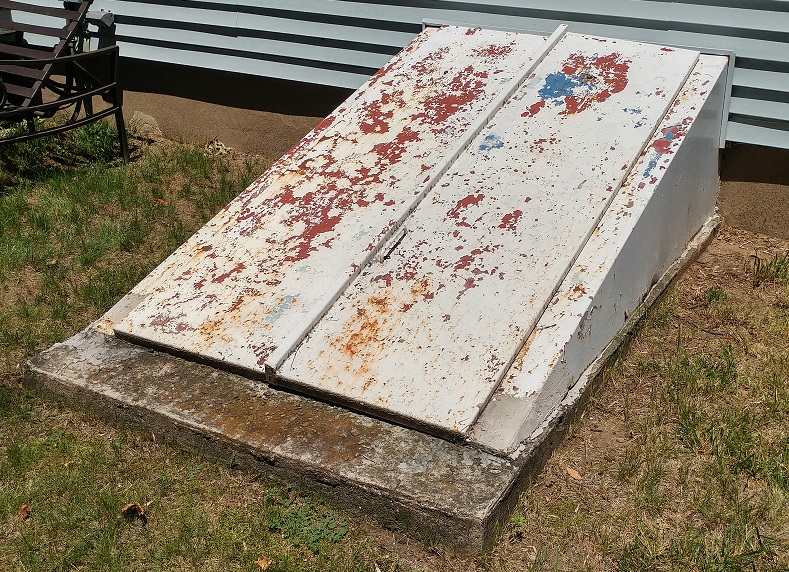 Before getting her new door, Amy Dellentash’s basement door was an eye sore and a safety hazard. Photo by T. Wolf.

“The existing doors were extremely heavy with failed internal locking bar mechanisms,’’ Wolf said. “They no longer functioned as they should from rust buildup inside the mechanism itself. If their young children pulled on the door, or a strong wind came by as they were inside the well, the children could have been severely injured by the falling door. Each door is well over 65 pounds, and in my opinion, it would not have been a minor injury.”

Wolf believes the door fell into disrepair due to lack of maintenance. Dellentash had purchased the home just three years ago, and it had been on her project list since purchasing the home. When Wolf set about installing the new door, he found immediate and difficult challenges.

“The foundation was out of plumb, deteriorated, and nowhere near flat for the proper installation of the new BILCO door system,’’ Wolf said.

The entire surface was inspected and any loose material was dislodged and removed. “Once there was a stable substrate to deal with, the entire surface was then scarified using a diamond wheel and grinder,’’ Wolf said. “This removed the algae, moss, and other contaminants which would have prevented proper bonding of the new cement to the old.   Forms were built, and the new concrete was applied to the newly prepped surfaces.  The forms were stripped, and the surfaces then parged with a new coat of cement to ensure sealing of the new and old juncture of concrete.”

Wolf said the foundation also had to be raised slightly, because the old door was a few inches taller than the new BILCO extension housing. But the home’s siding color had been discontinued 25 years ago. “I was forced to bring the height of the foundation up to ensure
that when a new J-channel was installed, that all exposed surfaces of the home's sheathing structure were covered up again,’’ Wolf said. “The closest color I found was the light gray, which almost matches the old, weathered blue of the original siding, and nearly perfectly matches the BILCO Light Gray color.”

Lack of maintenance, failure to open the doors for evaporation of internal moisture in the unit and having housing mounting flanges set in cement for five decades contributed to the decay, Wolf said. Now, Dellentash has a new door that improves her home’s appearance and is far safer, especially with young children around the home.

“It’s beautiful, he did a great job,’’ Dellentash said. “He helped me choose a color that complements the house, he improved the foundation and he was very professional and easy to communicate with.”