Most kitchens are woefully underlit. Lighting is often an afterthought, yet even when it’s carefully planned, designers and lighting experts often don’t agree on which lamps work best in particular fixtures and where those fixtures should be located.

In what follows, I’ll look at factors such as the number of fixtures and the type of lamps (bulbs) used, but I’m particularly interested in the size and location of recessed can lights for best practices for lighting in the kitchen. I’ve written about this before (see “The Right Way to Light a Kitchen"), but I recently measured comparative light levels on actual jobsites, and the data backs up my contention that, in most cases, the wrong fixtures are being placed in the wrong locations.

Here are some considerations for kitchen lighting layout.

There has been almost no new research on this topic for the last 30 years, and competing expert opinions leave designers confused about how much light is needed in the kitchen. The code isn’t much help: IRC 2015 requires just one light fixture for the entire kitchen, yielding perhaps 6 foot-candles (fc). That will help you avoid banging your hip on the corner of the island countertop, but it’s very dim light for working in the kitchen. 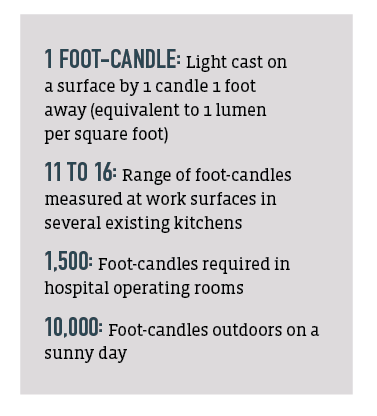 Industry groups also weigh in on the topic. In the book Kitchen & Bath Lighting: Concepts, Design, Light, which the National Kitchen & Bath Association (NKBA) released in 2015, the text suggests 50 fc for prep counters. This jibes with the January 2017 update of the Illuminating Engineering Society’s (IES) “Lighting and the Visual Environment for Seniors and the Low Vision Population” (ANSI/IES RP-28-16), which also recommends a minimum of 50 fc at the countertop surface.

My personal target is a 100 fc minimum, and even more for clients older than 60 (see “Aging Eyes Need More Light,” below). But I also put everything on dimmers, which enables users to soften the lighting while also saving energy and extending lamp life in halogens and LEDs.

Ideal Location for Recessed Canned Lights in the Kitchen

I believe there’s considerable misinformation about where canned lights in the kitchen should be located in relation to countertops. In a couple of books used by kitchen designers, I’ve seen illustrations showing recessed can placement well away from the task. The illustrations don’t include dimensions, but out of curiosity I traced and enlarged them, then scaled them using the 25-inch countertop as a guide. In doing so, I found that one illustration shows the cans 49 inches out from the wall and another shows the cans a whopping 56 inches out.

This spec seems to have originated in a kitchen lighting book that was popular in the ’90s. The book’s theory was that lights centered in walkways wouldn’t create “hot spots” on the upper cabinets and that under-cabinet lights would do the heavy lifting (see “Under-Cabinet Lights Won’t Save You,” below).

I bought that book, but the advice in there to center the cans in the aisles made no sense to me, and I stopped following its guidelines after one or two projects. But it has bothered me that this bad advice is still being disseminated. Then, a few years ago, I met with a prospective client who complained of really bad lighting in his newly redone kitchen. This launched me on the path of putting numbers to good and bad lighting. Now I measure, before and after, every kitchen I’m asked to redesign. You can’t manage what you don’t measure.

My opinion, based on common sense—and now also on empirical evidence—is that the proper place for canned lights iin the kitchen ntended for task lighting is directly over the edge of the countertop, which is roughly 24 inches out from the wall. This location puts the beam right above the work surface and, equally important, it prevents the cook’s body from blocking the light when he or she stands at the counter working. It also throws light directly into open drawers.

Placing and Testing Fixtures in the Kitchen

To test my theory, I first purchased one 4-inch and one 5-inch recessed can and a variety of lamps. I then enlisted the help of current client Mike Flaherty, who is having a second-floor addition built at his 1920s bungalow, along with associated first-floor upgrades.

Part of the under-construction kitchen ceiling was open, which made it possible—one evening after dark—for us to hold the can lights up at the proper height (5 feet above the counter) and at a variety of distances from the wall, starting at 24 inches and going out to 48 inches. I stood on a stepladder while Mike stood by the counter or in front of it (photos, above) and recorded the measurements from my trusty Meterman LM631 light meter.

Could there be errors? Sure. For instance, I have two light meters, plus a light meter app on my Android phone, and each gives different readings. But I do trust the accuracy of the relative values from a single meter.

The results confirm that the location of a can light makes a big difference, especially when, as happens in the real world, people stand at their counters while they prep and cook (see the “Recessed Light Location Test Results” table, below).

The reduction in light levels was more dramatic when Mike stood at the counter as if prepping (see “Actual Field Measurements,” below). With the can 36 inches from the wall, the 27 fc dropped to just 1.4 fc; at 42 inches out, the 13.1 fc plummeted to 0.6 fc—worse than candlelight! And with a 4-inch can, all of the results were about 30 percent lower. 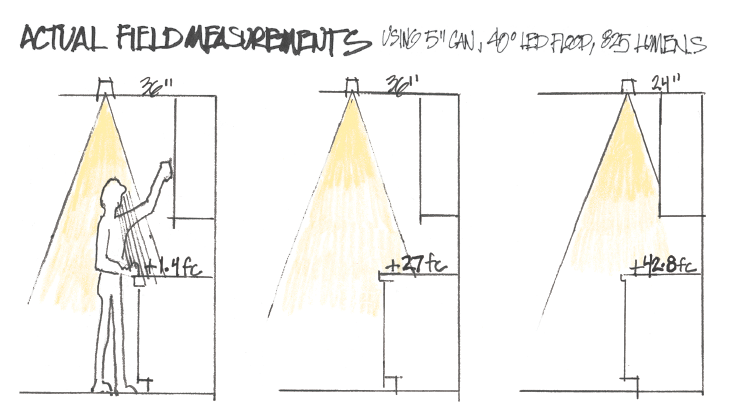 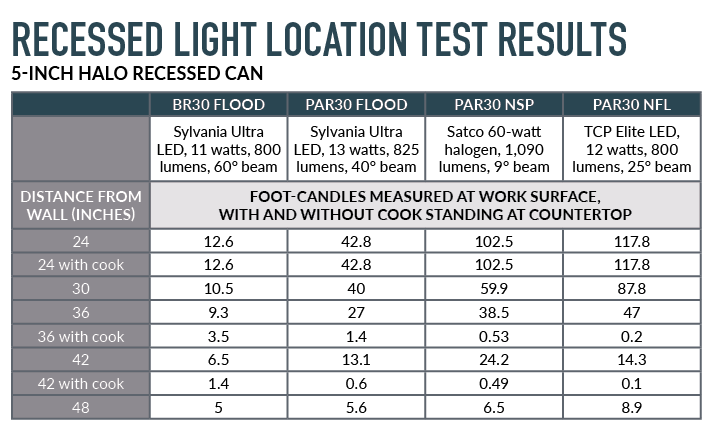 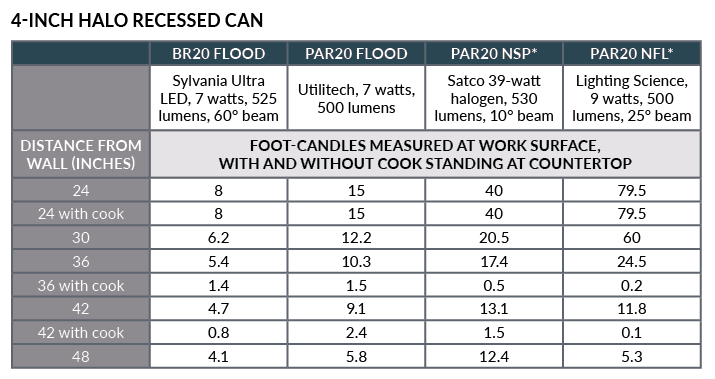 Takeaways From the Experiment

Placing cans in the walkways puts task lighting on the floor and spills ambient light onto the counter—it’s completely backward. Recessed cans are particularly inefficient for ambient lighting; better are surface-mounted or pendant fixtures that throw light in all directions.

The bottom line: For task lighting, cans should be placed 24 inches out from the wall, centered over the edge of the countertop.

Admittedly, these test results are for a single recessed fixture and lamp in a dark kitchen under construction. There is no cumulative effect of side-by-side fixtures, as would be the case in most kitchens. Nonetheless, these foot-candle measurements were dramatic. Here’s what I think we can learn from them:

After seeing these results, I will continue my practice of placing canned lights in the kitchen directly above the edges of work counters. In a future article, I’ll share several recent projects showing light levels before we started, computer simulations of the new lighting layout, and actual measurements after the work was completed.

I’ll also continue to use my go-to fixture and lamp—a 5-inch, airtight, IC-rated can with a 75-watt equivalent PAR30 NFL LED lamp. By itself, this spec puts down 117 fc on the countertop, and in concert with cans on either side (usually 3 or 4 feet apart) you can reach even higher light levels. You can also generate 100 fc with a single 5-inch can using an NSP lamp (9-degree beam), but you won’t find that bulb at your local big-box store.

I use IC-rated cans everywhere, whether or not the ceiling is insulated, because if air can get through, then sound can, too. It also simplifies the fixture order.

When Mike’s kitchen is complete, I’ll redo the foot-candle measurements with all of his kitchen lights on to see the cumulative effect. I’d also like to measure a 6-inch can with a PAR38 flood and spot to see how each performs in 10-foot ceilings. In addition, I want to measure output from an LED retrofit kit and from a low-voltage MR16 fixture with different lamps and beam spreads.

All of this data will help us to better understand how the different “layers” of lighting combine to create a successful project. As Sara Sullivan, a lighting designer with 186 Lighting Design Group, has said, “Each layer has a purpose in the kitchen: general ambient lighting, task lighting, and decorative lighting. There is no one answer that can truly be applied to every space or client; you need to revisit your ‘toolbox’ every time to create that perfect composition.”

Vision problems accompany aging, and for older people, poor lighting is a very real safety issue. Expert opinions differ on how much more light is necessary as people age, but there is clear consensus that more light is better.

Phil Richards, a lighting educator with Juno Lighting Group, in the Chicago area, recommends a foot-candle light level in the kitchen that is “your age plus 20.” Naomi Miller, senior lighting engineer at Pacific Northwest National Laboratory, recommends 50 to 100 foot-candles (fc) on the task. Steve Brielmaier, in a January 2017 article titled “25 Lighting Tips for Seniors” for LampsUSA, features a chart based on age groups and recommends 75 fc for 40-year-olds, 150 fc for 60-year-olds, and a whopping 225 fc for 80-year-olds. (Find out more about various vision aspects of universal design here.)

Under-Cabinet Lights Won't Save You

Under-cabinet lights are wonderful, but at kitchen sinks in front of windows, there are no upper cabinets to mount them to. The same goes for islands and modern loft-style kitchens, which use mostly base cabinets.

Light from under-cabinet fixtures mounted against the wall can reflect off polished countertop surfaces and cause distracting glare. Mounting the fixtures at the front of the cabinet reduces this problem and provides a bit more light to the work surface. 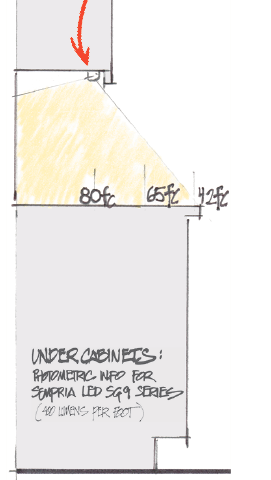 The other problem with under-cabinet lights is getting homeowners to use them. This is true for many of my clients, and I attribute it to their experience with the hot halogen or xenon fixtures that were popular the last time they remodeled their kitchen—you could keep pizza warm under those lamps. But LEDs have changed the game, and they come in different output levels, plus they’re dimmable.

One huge advantage under-cabinet lights have is that they’re below the viewer’s eye level (except when seated) and are less likely to cause glare. The exception is when the counters are highly polished—which the great majority of countertops are—then the reflection bounces right up into your eyes. Honed or matte countertops help, but the real solution is to mount under-cabinet lights behind the front rail of the upper cabinets instead of at the back against the wall. This location changes the angles of incidence and reflection and may prevent the glare. It also helps to deliver foot-candles on the working area, which is toward the front of the counter, not the back.