The Seek Compact imager (the model recommended for indoor use) can display standard and thermal images together on a split screen, which makes it easier to understand what the thermal image is showing and where problems are located. Photo: Carl Seville

I recently evaluated the Seek Compact thermal imager, a 1½-inch-long accessory that attaches to the power port of your smartphone.

Once the free Seek app is installed, using the imager is very much a point-and-shoot affair. You can take stills or video, and in addition to standard thermal images, you can select from three modes that display temperatures—high and low, average around a single spot, or areas above or below a selected threshold temperature. The Seek camera also takes standard and thermal images at the same time and can display them together on a split screen (above), which can be helpful later when interpreting the thermal images.

Time for a Field Test

I had the opportunity to use the Seek camera on several projects during blower-door testing. Given a 20- to 30-degree difference between indoor and outdoor temperatures, I was hoping to identify missing insulation or some significant air leaks, but I didn’t locate any, most likely because the buildings I inspected lacked those particular defects. However, I did find some major building envelope and HVAC duct leaks, as well as some noticeable thermal bridges at windows and doors. 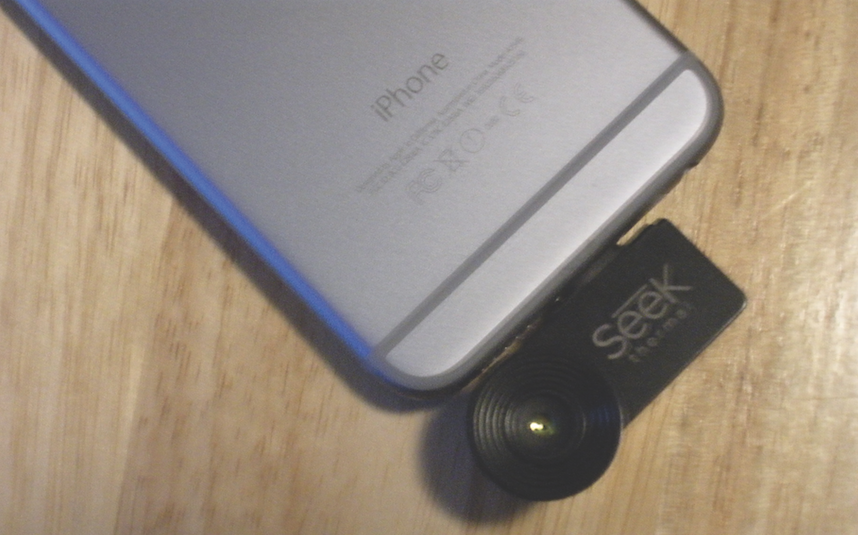 Being an experienced building performance professional, the defects I documented with the Seek imager were primarily ones that I already knew to be there. But some of the thermal images were dramatic enough that they could be useful in explaining building defects to a homeowner or to show a contractor where work is deficient or repairs are required. I also expect that during winter in cold climates, when there’s a larger difference between indoor and outdoor temperatures, the camera would be more effective in showing heat transfer and air leaks.

The quality of the thermal imaging is quite impressive, especially considering that just a few years ago the cost for an entry-level thermal camera started at several thousand dollars. More expensive cameras provide increased sensitivity and added features, but there can be good value in using a simple smartphone accessory such as the Seek. It’s often hard to explain to homeowners the effect of an air leak or missing insulation. Showing a thermal image of hot windows or cold walls could help sell a solution.

Carl Seville is a principal in SK Collaborative, which consults on and provides green certifications for single- and multi-family buildings.