The traditional go-to option for toting tools, materials, and people to and from the jobsite is cargo vans, but those familiar boxy haul-it-allers seemed like an endangered species until recently. That’s because a major shift in the light-truck market within the past decade at first eliminated some van models, then added others sourced from overseas. Ultimately, these changes created all-new cargo and upfit-worthy trade vehicle categories.

Today remodelers have an almost unlimited range of work vehicles to choose from, and vans are again leading contenders. Better still, today’s new vans come in a full spectrum of sizes that range from compact to “mini step-van” capacity.

It used to be that if you wanted a van for your business you mainly shopped among similar wheeled boxes from Ford, GM, or Chrysler. Now that list often begins with what many U.S. tradesmen once thought an unlikely contender: Mercedes-Benz. It was the brief Mercedes/Chrysler merger that killed off the original Ram Vans and brought the Sprinter to the U.S. The Sprinter was a game changer—a significantly larger standing-headroom van that really got today’s cargo-van market rolling.

Vans from Mercedes are again in the news, but this time because of the introduction of a more conventional-size van called the Metris (below). Due to roll-out in October in both cargo and passenger trim aimed at commercial markets, the Metris is described as “right sized” for U.S. buyers. Equipped with a 4-cylinder gas engine (208 hp with 258 lb-ft of torque), this stylish hauler has a maximum payload of 2,502 pounds, optional power sliding doors on one or both sides, and a choice of liftgate or 270-degree–opening rear doors. With a starting price of less than $29,000, the Metris even offers some high-tech features found in the automaker’s other vehicles, including “attention assist” to alert drowsy drivers and optional “lane-keeping assist” to prevent inadvertent vehicle wandering on the highway.

Full-size Mercedes-Benz Sprinter vans are still readily available for buyers seeking a higher-capacity cargo vehicle. High-roof models offer 78.2 inches of interior headroom, and Sprinters come in 144- and 170-inch wheelbase versions that have up to 530 cubic feet of cargo volume and a 5,508-pound payload. A 4-cylinder, dual-stage turbo diesel engine is standard, with a 6-cylinder, 188 hp diesel as an option. (Note that Sprinter and Metris information is available only at mbsprinterusa.com and not on the main Mercedes-Benz website.)

The new Metris from Mercedes has a 4-cylinder gas engine, a 7-speed automatic transmission, and rear-wheel drive. The maximum payload is 2,502 pounds and towing capacity is 4,960 pounds. Cargo width is 66.3 inches (50 inches between the wheels); cargo length is 111.5 inches (105.4 inches with partition).

Fiat’s acquisition of Mercedes’ former partner, Chrysler, has resulted in even more cargo van choices here in the U.S. Ram vans now include a super-size ProMaster to compete in the “Sprinter category,” and a compact ProMaster City to rival Ford’s Transit Connect. Both are Americanized versions of the Ducato (full-size) and Doblo (compact) Fiat-designed-and-built vans that have long been popular in European light-commercial markets. Ram, after reviving its “standard” cargo van after a nearly three-year hiatus, has discontinued this model for 2016.

Introduced in 2014, the larger ProMaster (photo below) initially offered a 3.6-liter, 24-valve V-6 gas engine (280 hp, 260 lb-ft of torque), to which a 3.0-liter, 4-cylinder EcoDiesel engine (174 hp, 295 lb-ft of torque) has been added. This van is available in two roof heights and three wheelbases up to 159 inches, and in cargo, chassis cab, and cutaway versions, plus a commercial passenger-van model.

The Ram ProMaster City (main image at start of story), new for 2015, is another entry in a new compact-van category that includes Ford’s Transit Connect and the Nissan NV200. Like the Ford model, ProMaster City is built in Turkey and shipped to the U.S. for upfitting to buyer specifications. It is available in cargo or full-window “wagon” versions for commercial use with a 2.4-liter gas engine (178 hp, 174 lb-ft of torque), 131.7 cubic feet of cargo space, and a payload capacity of 1,883 pounds. 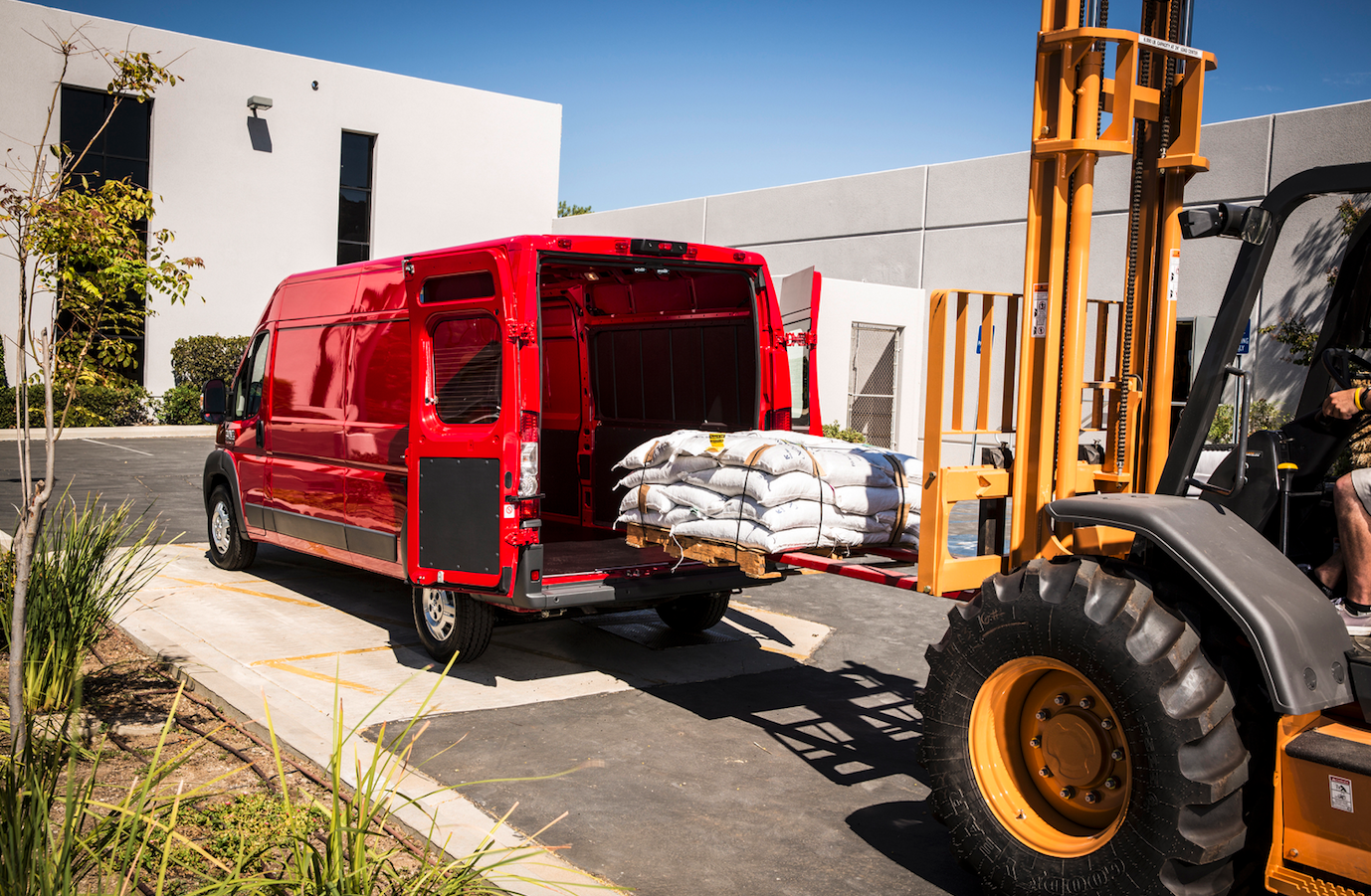 The full-size ProMaster (above) is available with a V-6 gas or 4-cyclinder EchoDiesel engine, two roof heights, and three wheelbases (up to 159 inches), and in cargo, chassis cab, and cutaway versions. The compact Ram ProMaster City (intro story image) has a cargo area that is 87.2 inches long, 48.4 inches wide (between wheel wells), and 51.8 inches high; maximum payload is 1,883 pounds. The near-vertical sidewalls accommodate interior upfits, such as shelves or work surfaces.

Originally built for the European market, Ford’s Transit Connect rolled out in the U.S. in 2009, marking another departure from the van category’s standard shapes and sizes. This compact car-like van offers a smaller cargo platform (from 77 to 128 cubic feet, depending on configuration), but delivers better fuel economy (25 mpg city/highway combined) than larger vans and is easier to maneuver in tight city streets.

The Transit Connect (below) is available in short or long wheelbase versions that can handle up to 1,620 pounds of payload. A 2.5-liter, 4-cylinder gas engine is standard equipment, but can be specified with a compressed natural gas/liquid propane conversion package. An optional 1.6-liter, 4-cylinder turbo-assisted EcoBoost model is also available.

In addition to its Transit Connect, Ford last year followed in the Sprinter’s tracks by introducing its Transit mini step-van, which replaces Ford’s venerable E-Series vans. Transit comes in three body lengths (130 to 148 inches), with up to 487.3 cubic feet of interior volume, and three roof heights, with up to 77 inches of headroom. A dual rear-wheel version with a maximum payload of 4,650 pounds is also available. Engine choices include 3.5-liter EcoBoost turbo or 3.7-liter gas V-6.

The front-wheel drive Ford Transit Connect has a maximum payload is 1,620 pounds and a towing capacity of up to 2,000 pounds. The manueverable short-wheeelbase model offers 103.9 cubic feet of storage area; the long-wheelbase model has 128.6 cubic feet of storage. The larger Transit mini-step van, which replaces Ford’s E-series vans, comes inthree body lengths and three roof heights.

General Motors, which usually runs neck-and-neck with rival Ford in its vehicle lineup, has opted not to compete in the mega-size van category while continuing to maintain its fleet of “standard” full-size vans under the GMC Savana and Chevrolet Express nameplates.

That said, Chevy has introduced a compact van called the City Express (below), which is actually a rebadged NV200 van built by Nissan. The front-wheel drive van is equipped with a 2.0-liter, 4-cylinder engine rated at 131 hp (139 lb-ft of torque) and a continuously variable transmission. Like the Transit Connect, City Express was designed for maneuverability and fuel-efficiency in urban environments. The single wheelbase and body style comes with 122 cubic feet of cargo space and a maximum 1,500-pound payload capacity.

Like the NV200, the City Express offers a cockpit fitted out for business, with features such as laptop and hanging-file storage, recessed areas on the instrument panel for folders and documents, and a sliding storage drawer under the passenger seat, which also folds down to serve as a worktop. 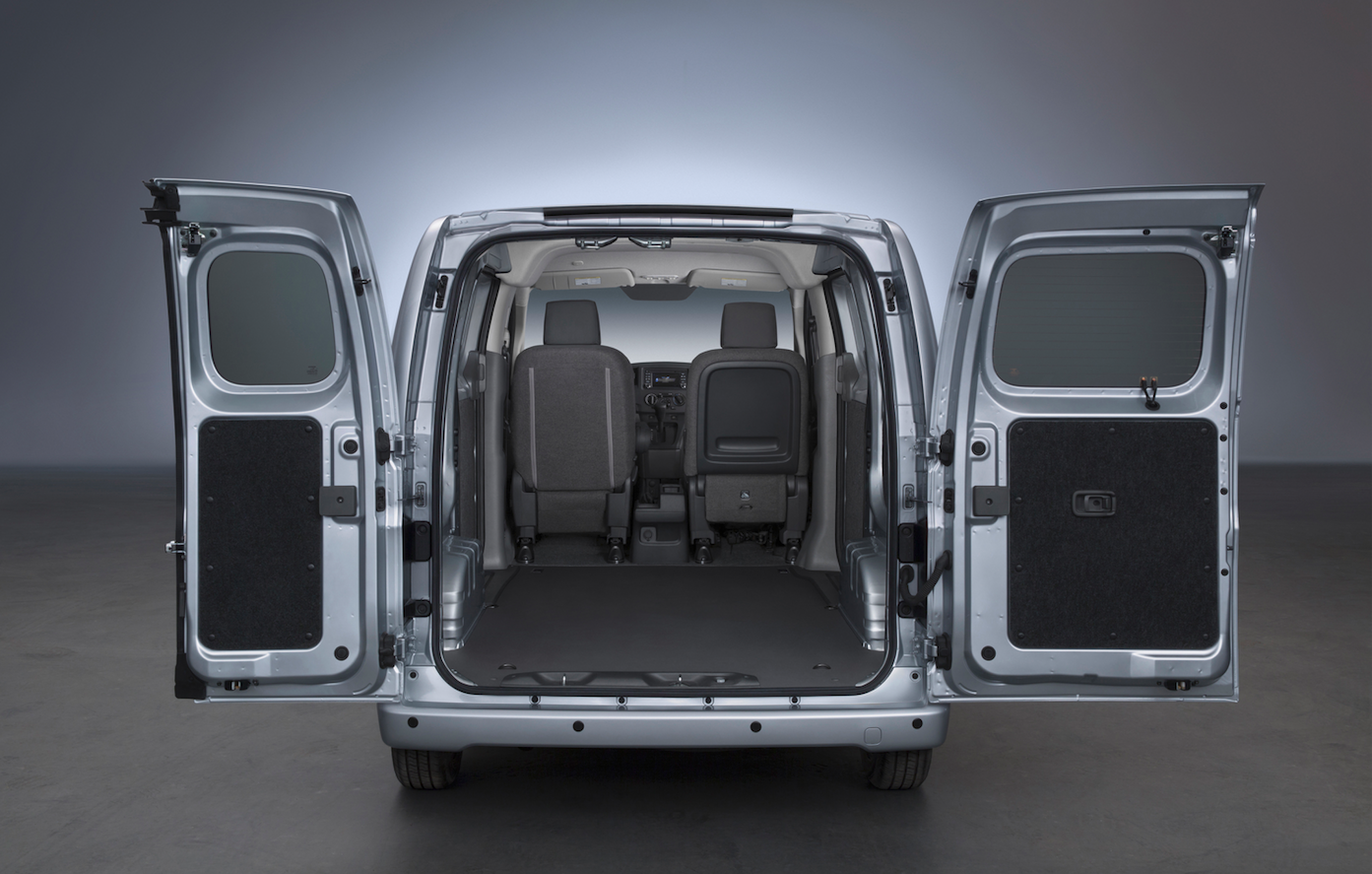 Although the 2016 Express Cargo and its near-twin Savana Cargo (below) are still considered full-size vans, they have become the midsize niche between the large and new compact-van categories. Both are based on GM’s heavy-duty 2500 and 3500 truck platforms and are available in regular and extended wheelbase lengths (135 and 155 inches), and chassis cab setups. Both offer standard 4.8-liter (285 hp with 295 lb-ft of torque) or optional 6.0-liter (342 hp, 373 lb-ft of torque) gas V-8 engines. Also available is a 6.6-liter turbo diesel rated at 260 hp and 525 lb-ft of torque. 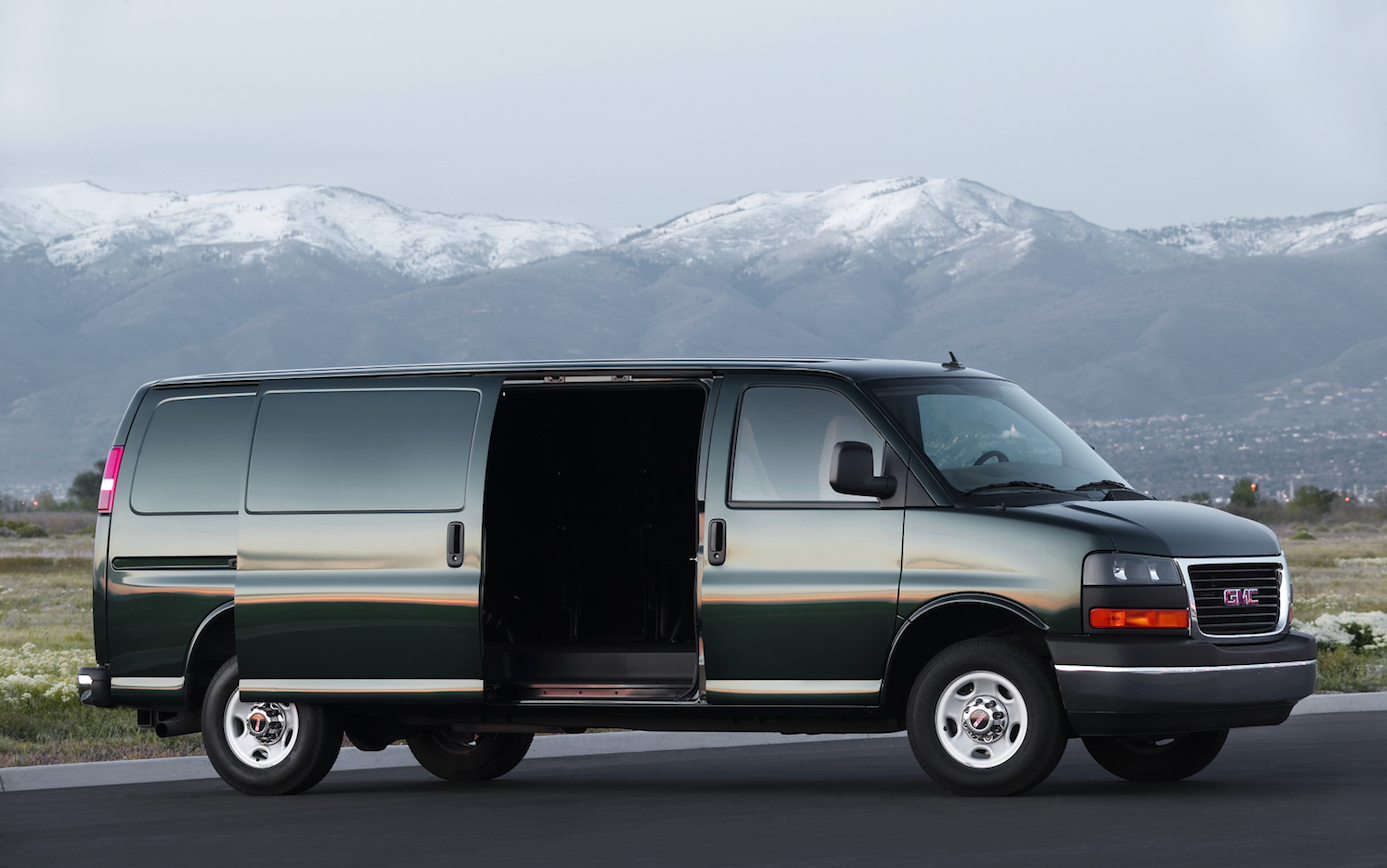 The full-size Savana Cargo van from GMC is available in two wheelbase lengths, 135 inches and 155 inches. A Vortec 6.0-liter V-8 engine is standard equipment, but three other engines are available, including a compressed natural-gas option. 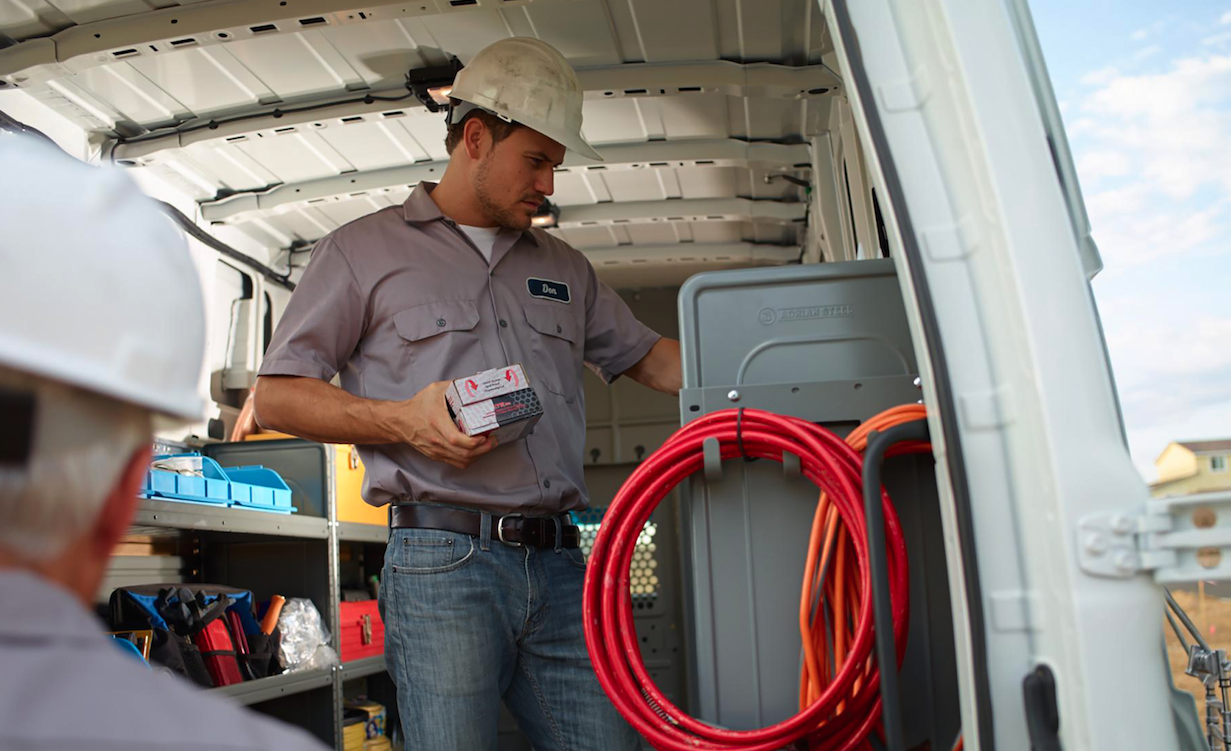 The NV Cargo van (right), which it introduced in 2011 and builds in Mississippi along with its Titan pickup trucks, is configured to compete against both traditional full-size and mini step-van competitors. Like the GM vans, it’s available in 1500, 2500 HD, and 3500 HD versions; and like the Transit and Sprinter, it offers a high-roof model with 77 inches of headroom, although in cargo volume (maximum 420.5 cubic feet) it trails the bigger vans. Two gas engine options include a 4.0-liter V-6 (261 hp, 281 lb-ft of torque) and a 5.6-liter V-8 (317 hp, 385 lb-ft of torque).

Nissan’s NV200 Compact Cargo van is identical to its Chevy City Express cousin in engine, payload, and interior capacity. Notably, Nissan points out that this urban “mini” van is more than 4.5 feet shorter in length and 2.5 feet lower in height than traditional full-size, high-roof models, which translates into a tighter turning radius (36.7 feet) and better fuel economy—something any small-business owner can appreciate. PR

Nissan’s NV Cargo van (above) is available in three versions with standard and high-roof configurations, and a maximum cargo volume of 420.5 cubic feet.

Mike Morris is a former licensed remodeling contractor and journalist who writes about the home building and automotive industries.

I am very interested in the ford and ram full size new vans. I have been looking but have yet to see a side by side review or long term review comparing the two. This would be nice to see. I drive a ram 2500 truck second one.But, have four E250 extended vans for all my work vans. I am interested in the real world test of the ram with front wheel drive and durability. It would also be nice if they would list fuel mileage on these vehicles and 2500 and 3500 trucks. I know it is not required by the government. But, as a business owner it would be nice to know to be able to factor this in my decision when purchasing. As I am sure I am not the only business owner to think this. I understand that mileage changes when loaded, it would still be nice to know the mileage empty and then with maybe a 2000# payload.