The revelatory nature of tech has fundamentally altered the way people approach home improvements, according to a report from Consumer Specialists and Kleber & Associates. 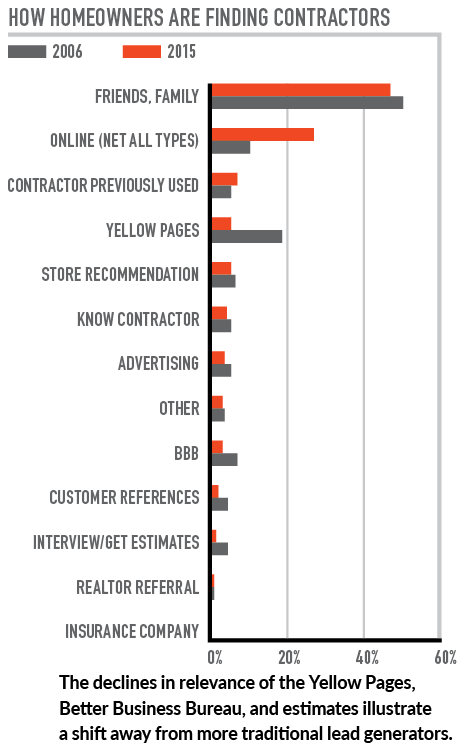 Drawing from data collected in 2006 and 2015, the report highlights a number of significant shifts between the two periods, most of which stem from the increasing ubiquity of internet- enabled devices—mainly smartphones.

For one, it’s changed how homeowners see their role in the process. Consumers now come to the table with more input, as Pinterest, Facebook, and Houzz have all become staples of the research process. They know about new products, and can often speak about them beyond generalities. And they explore the industry online, watching videos and checking out various websites.

It’s also changed how homeowners find contractors. Since 2005, the number of consumers looking for pros online has increased by 250%. Friends and family referrals remain the No. 1 source, but its relevance has dropped, a trend that we can only assume has continued since 2015.

The internet is also now the No. 1 source for information, moving from the No. 3 spot in 2005. What did it replace? First, friends and family (now at No. 3); and second, the contractors themselves (still No. 2). The shift to online has greatly increased the relevance of reviews for contractors, which has, in turn, adjusted priorities around the ultimate hiring decision. Homeowners now care more about past work and whether jobs can be done right than a company’s overall reputation. Cost is still the No. 1 influencer.

The good news is that change doesn’t equate to detriment. Homeowners are changing, but not so much that they’re beyond the scope of remodelers. It’s only a matter of finding ways to engage them.