A great project starts with a big vision. The vision for The New American Remodel was to offer ideas on how to transform a historic structure into a showcase of modern living that meets the highest standards of energy-efficient construction, and to do so without losing its connection to the period when it was built. That vision has become reality in a home that’s historically faithful and architecturally stunning. To describe it as an example of fine craftsmanship doesn’t do it full justice—“It’s really a work of art,” says architect Mark Nasrallah.

That wasn’t true of the original 1937 Mediterranean-style home, which had been altered and added on to over the years with little thought to design integrity. Architect Mark Nasrallah and remodeler Victor Farina restored traditional elements and replaced the additions with a new private master suite on one side, an open-plan common area and a three-car garage on the other. A long gallery at the back of the original structure connects the additions to each other and to a fully restored core home. The result would fit in 1930s Florida, yet has a timeless estate feel.

The home sits in an old Orlando neighborhood defined by traditional architecture. The design team wanted the remodeled home to blend in with the neighbors without being Florida-specific. “We wanted it to have an early American charm,” says landscape architect Scott Redmon. As a show home, they also believed this approach would offer practical design ideas for professionals from all parts of the country.

The approach is evident in the landscape. The stone-and-brick terraces out front would be at home in the Northeast or Midwest, as would the dark driveway pavers, the stone walkways, and the stone pool deck from Natural Paving. “You don’t see a lot of bluestone in Florida,” says Redmon, especially around pools, where dark-hued masonry can heat up in the sun. But Redmon considers the pool a visual composition. “Pools like this are fountains that people sometimes swim in,” he says.

The home’s defining feature is its brick and cement plaster facade. It makes a lasting first impression.

The brick is an 80/20 mix of Meridian Brick’s Old Guignard and Sandy Creek lines (made in Bessemer, Alabama, and Augusta, Georgia, respectively). Nasrallah arranged them in a figure-ground pattern, with the brick forward of the plaster background. This makes the brick stand out more than the more common approach of brick around the base of the house and plaster above it.

But to see what really makes the brick on this home pop, you need to look closer. “People are wowed by the visual presentation, but may not be able to describe why,” says Nasrallah. “It has to do with how the bricks were detailed.” 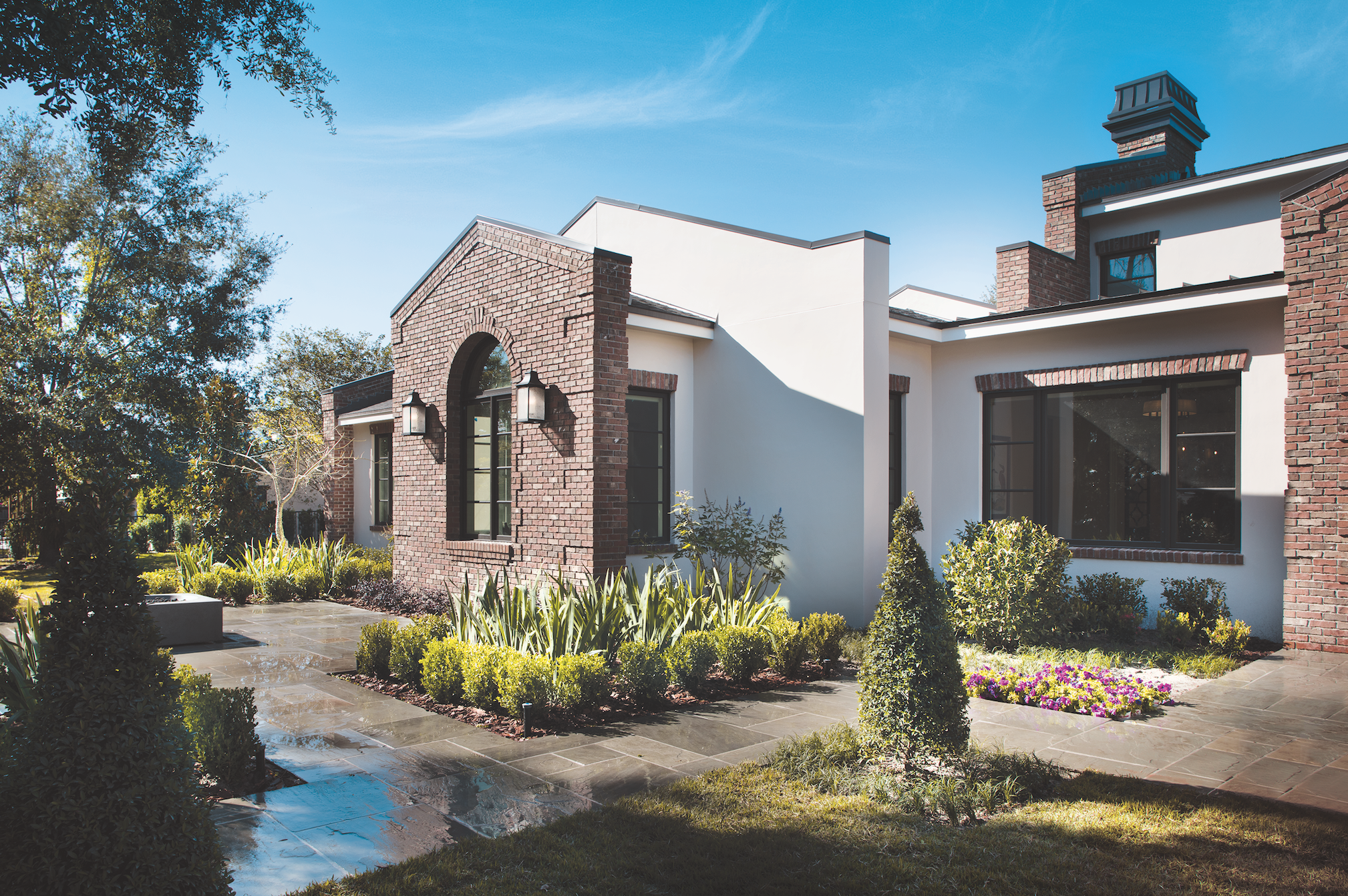 The home’s defining exterior feature is the sculpture-like effect of the intricately detailed patterns in the Meridian brick at corners, around openings and along the parapets, set against a background of cement plaster. The IKO asphalt roof shingles complement the brick better than concrete tiles and are designed to resist uplift and pull-through in winds up to 130 mph.

That work was thanks to John Brandies, a senior project designer whom Nasrallah calls his brick expert. He approached the project as a sculpture by designing intricate details for every part of the home: reverse corbels 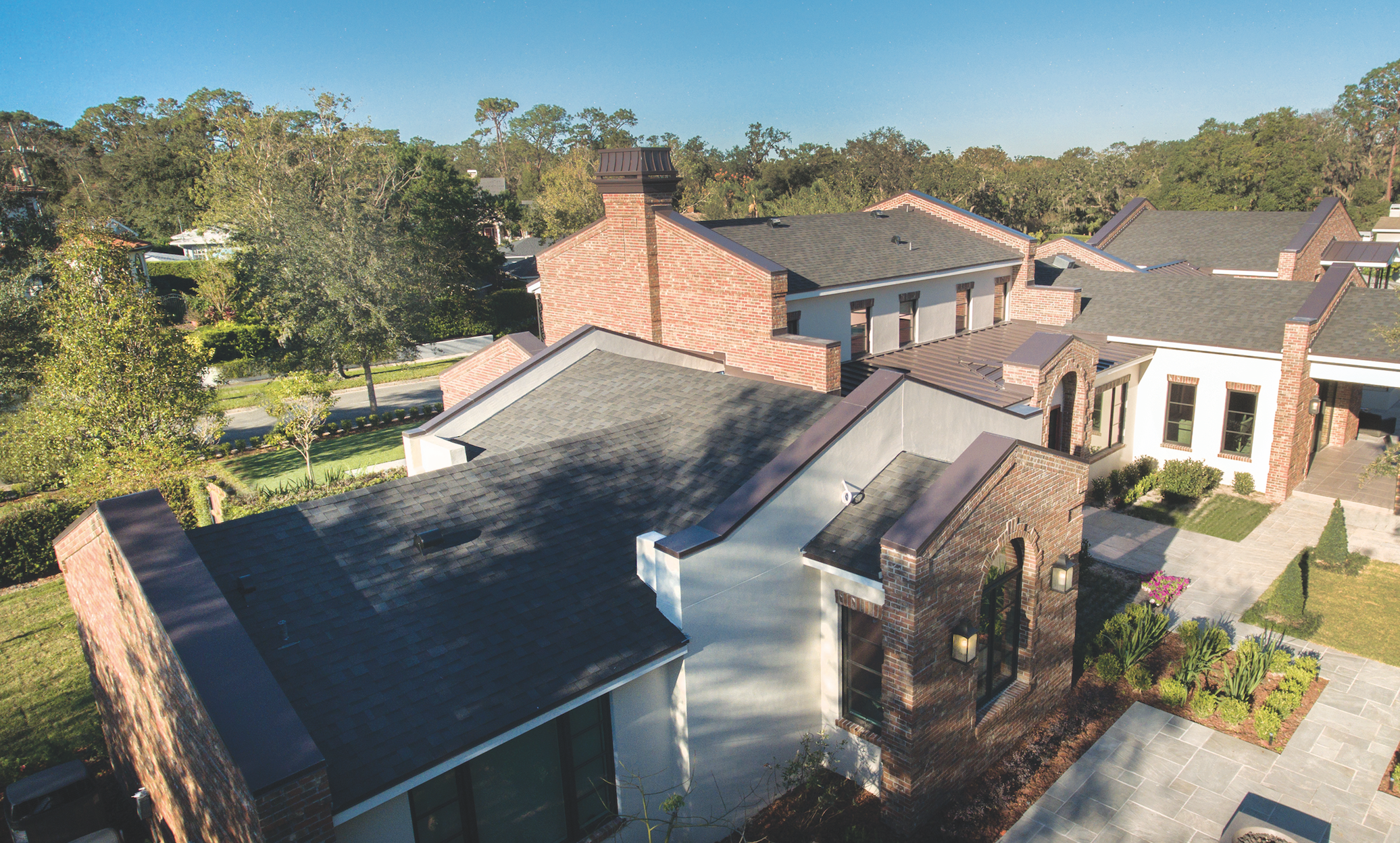 and quoins at corners and around windows: brick rowlocks along the gables; brick parapet walls; and a stepped brick chimney cap.

Like any artist, Brandies composed his work to give viewers a specific experience. “We wanted the walls to have a more human scale and an interesting shadow pattern,” he says. “We accomplished this with a combination of recesses and projections. It’s a subtle effect you really notice when the sun strikes the house.”

He cautions that pulling off something of this complexity demands a brick mason who has truly mastered the craft. “Only a handful of masons can do this level of work,” he says. He collaborated closely with Keith Woods of KW Masonry throughout the project to make sure that every course would fall exactly where it was supposed to on every one of the home’s wall surfaces, despite the complicated geometry.

Fortunately, you need not go to this level to get a more interesting brick presentation than the typical home. Even one or two of these touches can elevate what’s otherwise a standard brick veneer. But Nasrallah also insists that even the best siding composition will only make the desired impression when paired with the correct roofing. When it comes to brick, he believes the best match is a laminated architectural shingle.

“People in Florida gravitate to concrete roof tile, but I prefer shingles on a brick home,” he says. Brick is heavy enough; a masonry roof would make the home seem too heavy. By contrast, shingles complement the brick.

He chose IKO Dynasty Performance roof shingles because they carry a 130-mph wind warranty. Their integral sealant resists uplift and keeps wind-driven rain out of the overlap, while a 1¼-inch reinforced nailing zone minimizes pull-through.

The home’s additions were spread out over the lot to keep the focal point and period feel of the original home’s core. The brick facade played a part in that, as did restoration of the iron posts and rails on the front porch.

The door and window choices helped, too. The period emphasis led the design team to choose Loewen windows for the core home as well as for the additions. “Old windows tended to have thinner sashes than modern ones,” says Nasrallah. “We wanted relatively thin windows that still met wind codes. Loewen was able to provide them.”

The new windows also helped the home meet its energy goals. “These are the best windows I’ve worked with,” says Drew Smith of Two Trails, the home’s energy consultant. “Good windows typically have SHGCs from .21 to .28, but Loewen’s range is from .16 to .23, which is better.” 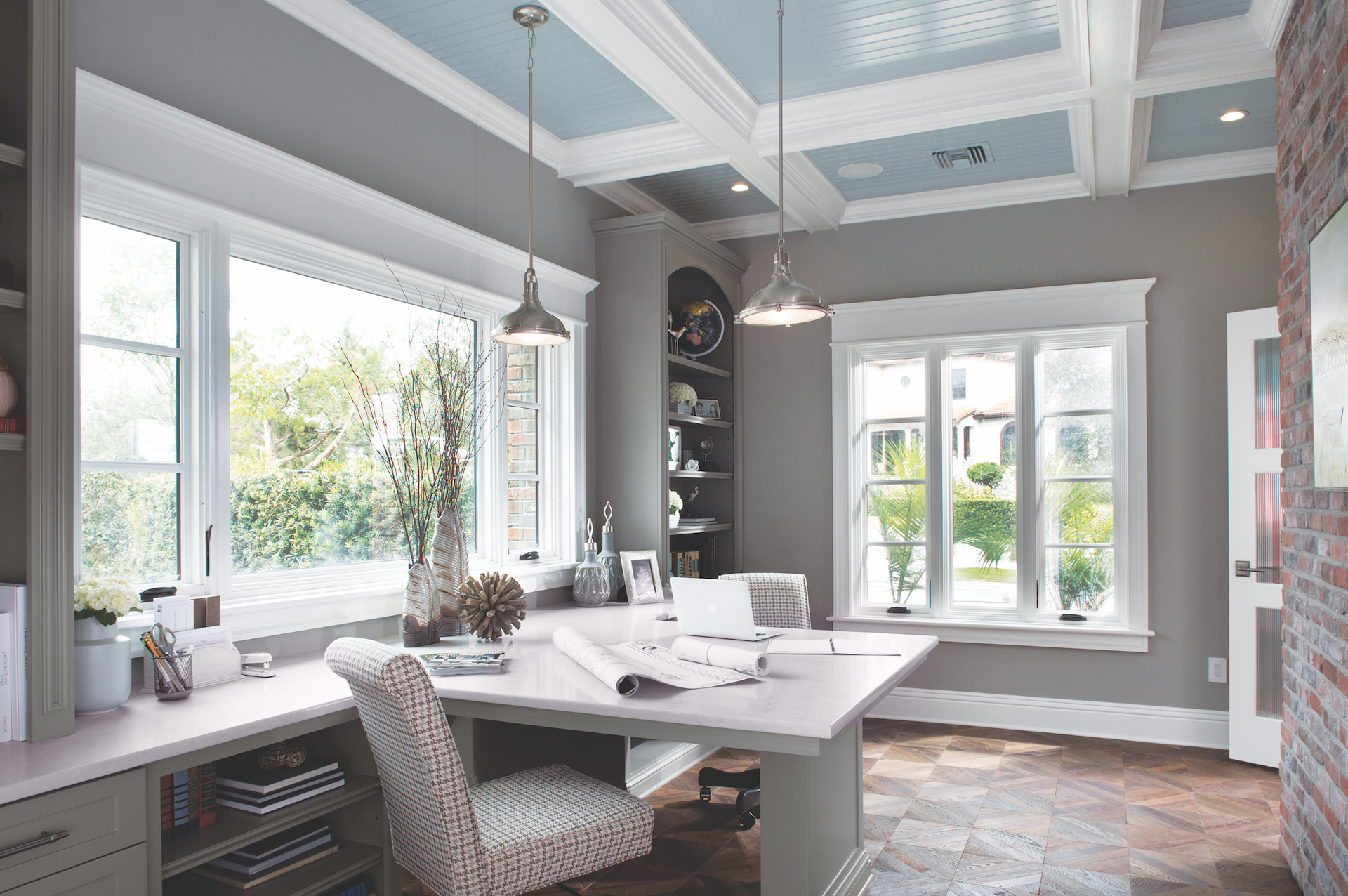 The design team chose Loewen windows because the thinner sashes were consistent with the look of the older windows they replaced while still meeting current wind codes in both the core home and the new additions. The wall-mounted Liftmaster garage-door opener ((below) has a standby battery and can be monitored and controlled from a smartphone.

Windows are just one example of how the home’s beauty goes below the surface. In fact, the design/build team wanted to make it an exemplar of energy-efficient comfort, a goal they documented with a final score of 43 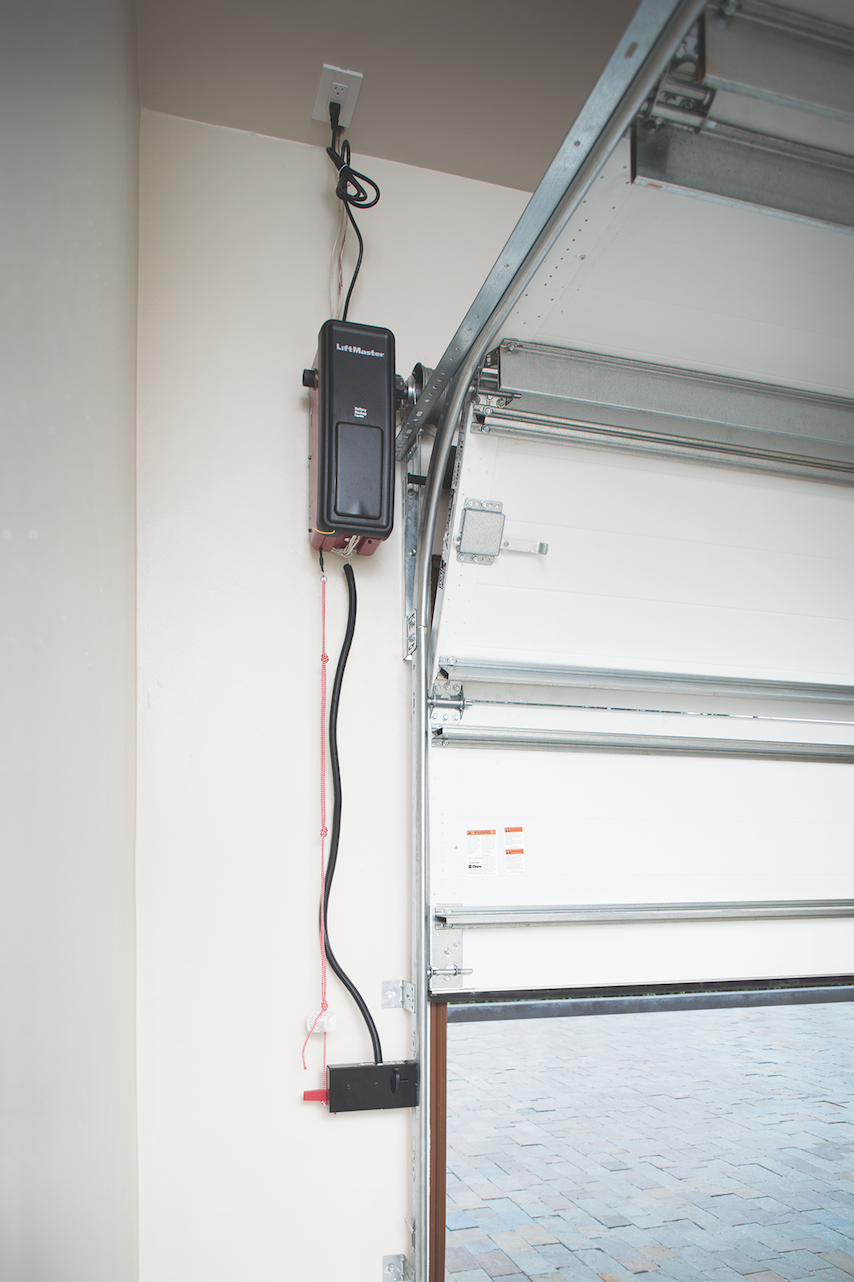 from the Home Energy Rating System, a two-thirds reduction in energy versus the as-built home. That qualified for Energy Star and earned an Emerald Rating from the National Green Building Standard.

Insulation was a big part of this achievement. Like many Florida homes, the exterior walls for The New American Remodel’s additions were built from concrete masonry units. A lot of masonry walls are insulated on the exterior, but here the masonry blocks were insulated on the inside. That made it easier to detail the exterior brick and cement plaster, which workers installed over a layer of Kingspan GreenGuard 3D Building Wrap, a drainable weather-resistant barrier that also helped the home meet its air tightness goals.

The wall insulation consisted of a 1-inch layer of Kingspan unfaced extruded polystyrene board, followed by furring strips, then a layer of FiFoil M-Shield radiant insulation, a premiumgrade aluminum foil covered by a synthetic polymer facing.

The home also has plenty of wood framing, including the exterior parapets, the bonus room over the garage, the roof trusses, and the interior wall framing. Dimensional lumber, trusses, LVL beams, and plywood sheathing were all supplied by 84 Lumber.

Because the home’s HVAC ducts run through attic spaces inside the building envelope, open-cell foam insulation was sprayed on the underside of the roof sheathing. All insulation products used in the home were vapor-permeable. That means the home can dry to the outside when put under a slight positive pressure by the HVAC system, which is something you want in a hot-humid climate.

After designing the architectural and energy packages, the next step was to specify an infrastructure that would meet the needs of a 21st century family. Eaton provided equipment for a 400-amp electrical service, as well as a 100-amp liquid cooled standby generator, which was located behind the feature wall near the pool. Power outages aren’t common in this area, but Orlando’s location in Wind Zone II makes backup power a good idea where budgets permit (as Irma reminded everyone last September). 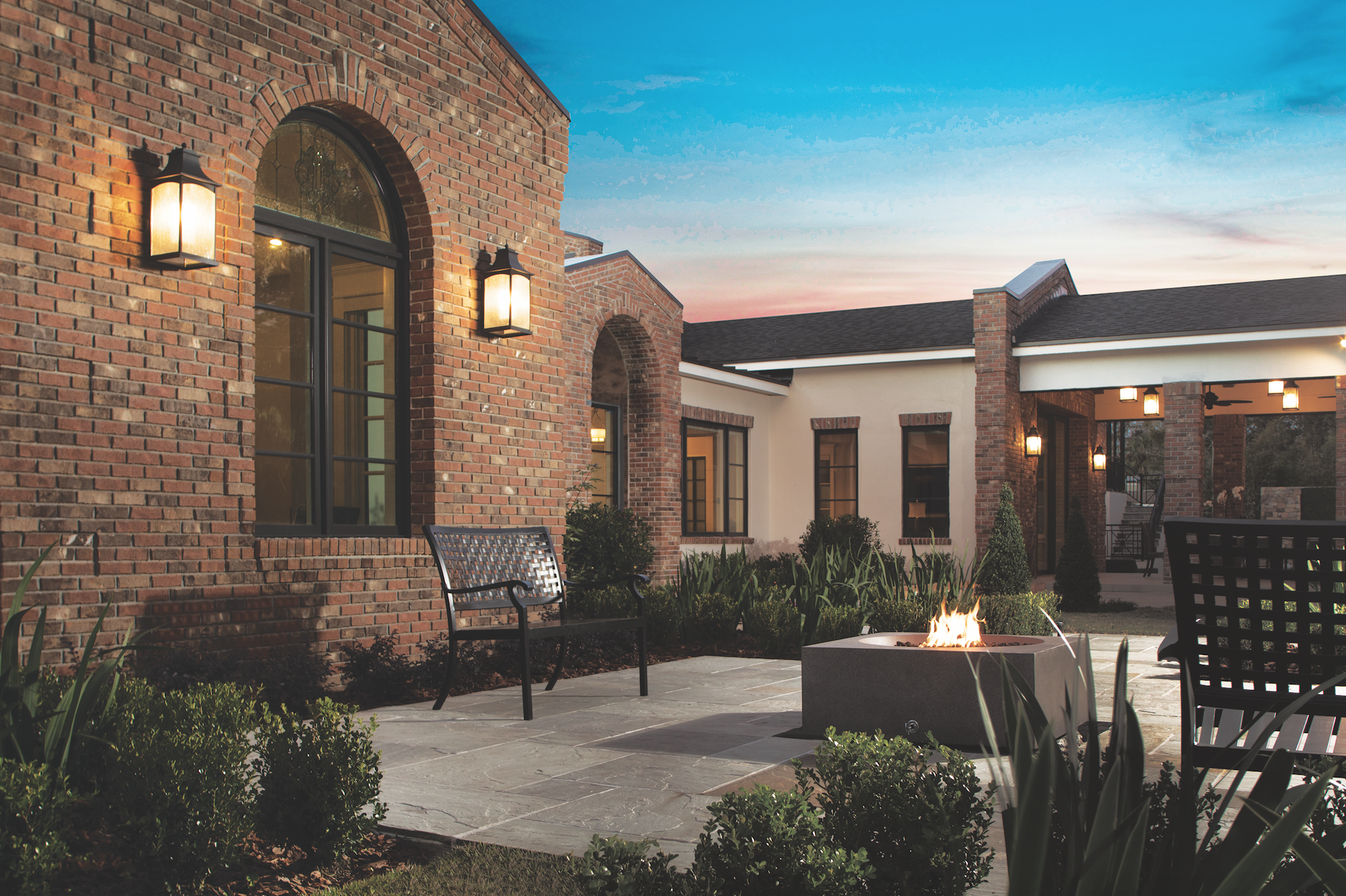 Gas appliances, including the fire bowl (above) and outdoor fireplace, as well as the Thermador range in the main kitchen (below and bottom), are served by CounterStrike CSST gas piping from Omega Flex. Available in long lengths, this flexible, polyethylene-sleeved, stainless steel pipe requires fewer connections and easily bends around corners. Push-to-connect fittings from Sharkbite Plumbing Solutions (below and top) saved labor throughout the house by eliminating the need for soldered connections in water supply lines.

The home also has a Liftmaster 8550W garage door opener with a standby battery. With so many people using their garages as main entrances, this is becoming a must-have feature on many homes. The 8550W is a 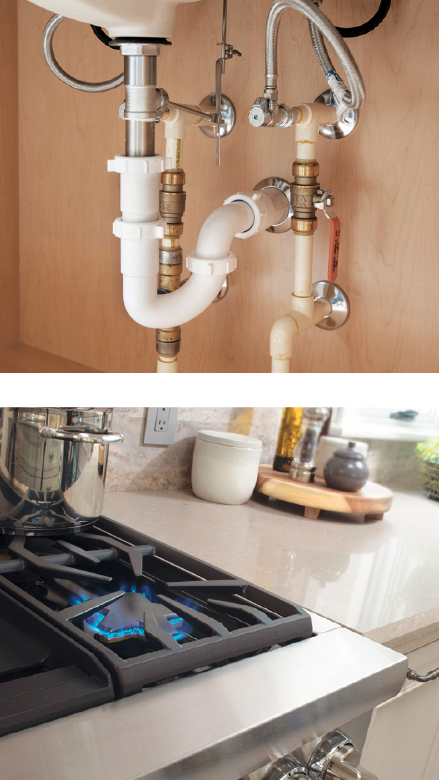 wall-mounted unit, which gives homeowners the option of adding a lift to the ceiling for things such as bikes and canoes that they haul around on their car’s roof rack. It uses the company’s MyQ technology, which lets the owners monitor and control it with a smartphone.

Farina also looked for infrastructure products that reduced installation time. One such case is the gas piping. The outdoor fireplace, the fire bowl, the Thermador range in the main kitchen and the grill in the outdoor kitchen are served by CounterStrike CSST gas piping from Omega Flex. This polyethylene-sleeved stainless steel pipe comes in long segments that reduce the number of connections required. A proprietary jacket material with energy-dissipating properties protects the system in the event of a lightning strike. All gas appliances are propane models, connected to a tank buried in the ground in front of the house.

To speed up the plumbing, Farina opted for the push-to-connect system from SharkBite Plumbing Solutions. This end-to-end solution includes fittings and valves as well as specialty connections such as washing machine outlets. Its push-to-connect fittings make it great for working in tight spaces on remodels or re-pipe jobs, and have the added advantage of a visual indicator that confirms a proper connection.

These and other time-saving products helped trim the amount of labor needed for the rough-in phase. That, of course, left more budget for the fine craftsmanship that defines the home.

That craftsmanship is also on display in the interior finishes, which we’ll look at next month.