A closer look at the kitchen and bath of the 2015 Model ReModel project in Dallas by Hatfield Builders & Remodelers, with Professional Remodeler It’s been a long and rewarding road. Part pictorial, part how-to journalism, and part reality TV for remodelers, the Model ReModel has tracked a whole-house single-family home remodel in Dallas from demolition during a rainy spring to completion just in time for the holidays. As of today, there a still a few finishing touches to be made, but the project is essentially done.

“We’re very excited about the way it’s turned out,” says Chad Hatfield, president of Hatfield Builders & Remodelers in the Dallas metroplex. “The home has a classic elegance that will never go out of style. And the large open space between the kitchen and living room will make a wonderful place for the family to be together.”

One of the most striking aspects of the home is the row of French doors looking out onto the backyard. The doors are part of the Mira Premium series from Ply Gem and feature ball bearing hinges, low-E glass, and full-perimeter weatherstripping. They’re available with two interior options: white or Natural Clear Wood.

The French doors have an unmistakably traditional design that perfectly complements the rest of the home. Yet they reflect a contemporary trend: the idea of creating a strong visual connection between the interior and outdoors. Large glass patio doors are the result of relatively modern manufacturing techniques, and their popularity with homeowners has continued to grow as the number of available options has increased. The doors in the Dallas Model ReModel open inward—a consideration for clients who have limited floor space, which is not the case here. (Mira Premium doors are also available as outswing models, along with a variety of other choices.)

Homeowner Carrie Hatfield is an interior designer, and her overall vision for the home was to create a timeless aesthetic that remains true to the home’s classic roots while still looking fresh and current. “I wanted to keep the existing charm, but give it a more modern feel,” she says. 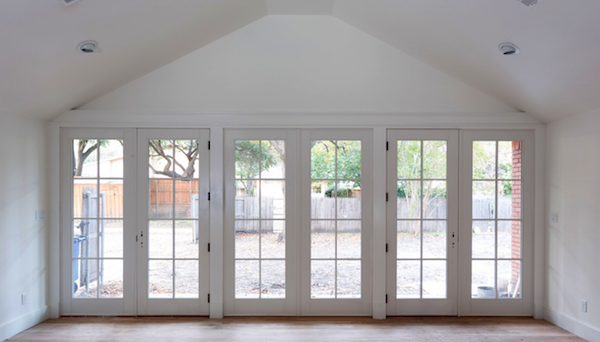 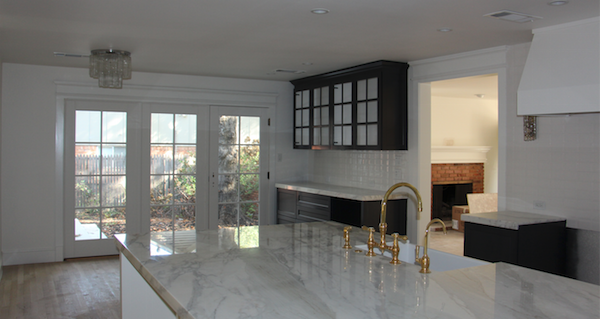 The vision for the kitchen was a flawless example of forward-thinking design. It’s a generous, light-filled space and a study in simple elegance, from the clean lines of the cabinets to the understated beauty of the Ann Sacks tile backsplash. The walls are painted with Benjamin Moore’s Simply White—the paint manufacturer’s Color of the Year.

“I wanted the space to be traditional, to relate to the original design of the house itself, but to also be relevant to current trends with clean, modern elements,” designer and homeowner Carrie Hatfield says. As a designer, her signature style is a restful, lighter palette with accents of contrasting color.

The kitchen space opens directly into the great room with its show-stealing wall of Ply Gem glass French doors. The homeowner wanted a lot of natural light, and in designing the kitchen, she thought about how sunlight would play across the different surfaces. For example, the countertops are a Calacatta marble called Carrara Premium. The slabs of stone are richly veined with dark grays and occasional, surprising streaks of warm brown, which almost seem to glow in the light and pick up on the color of the traditional-style brass faucet and the sconces on either side of the range—a warm, contrasting accent to the white and black. “The kitchen is so important,” Carrie Hatfield says. “I know it sounds like a cliché, but it truly is the heart of a home, and I wanted it to be a beautiful, gracious place.”

To that end, she chose the iconic look and state-of-the art functionality of KitchenAid appliances. Each product is designed with thoughtful touches such as satin and high-gloss chrome accents. 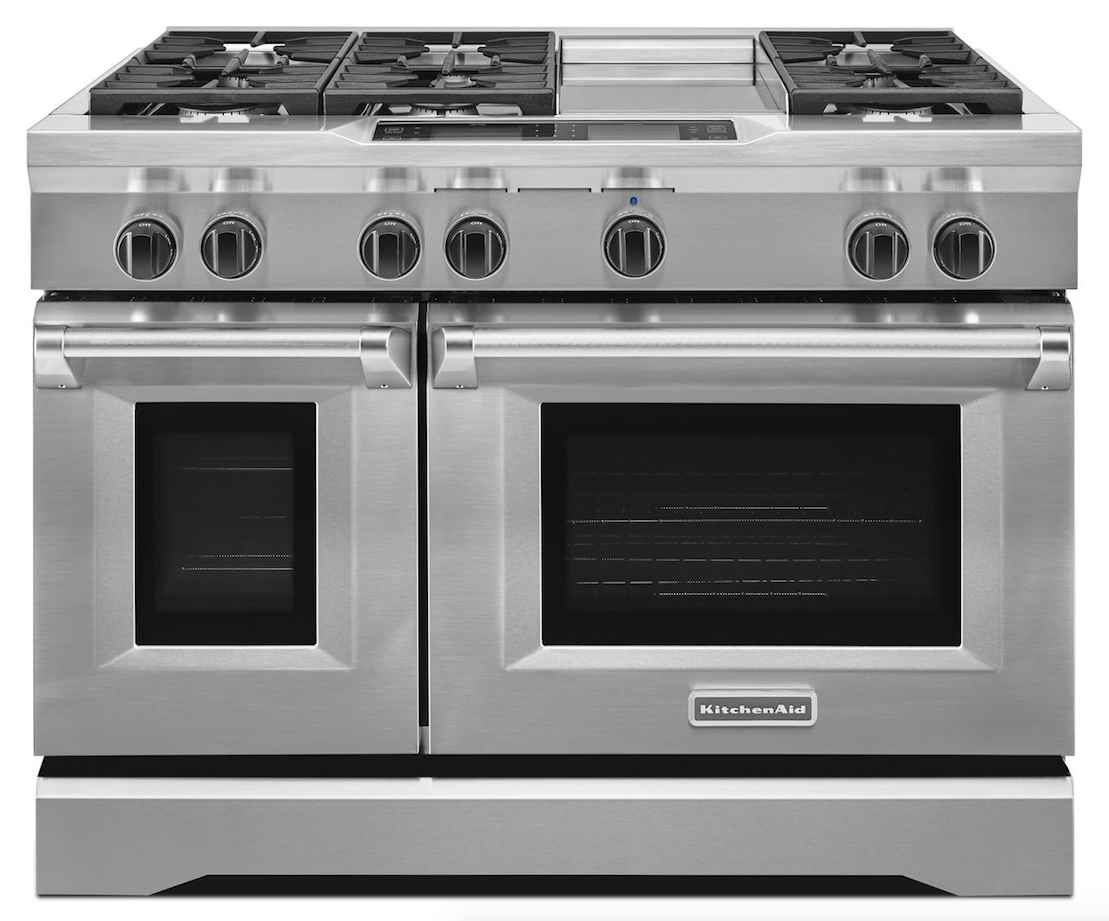 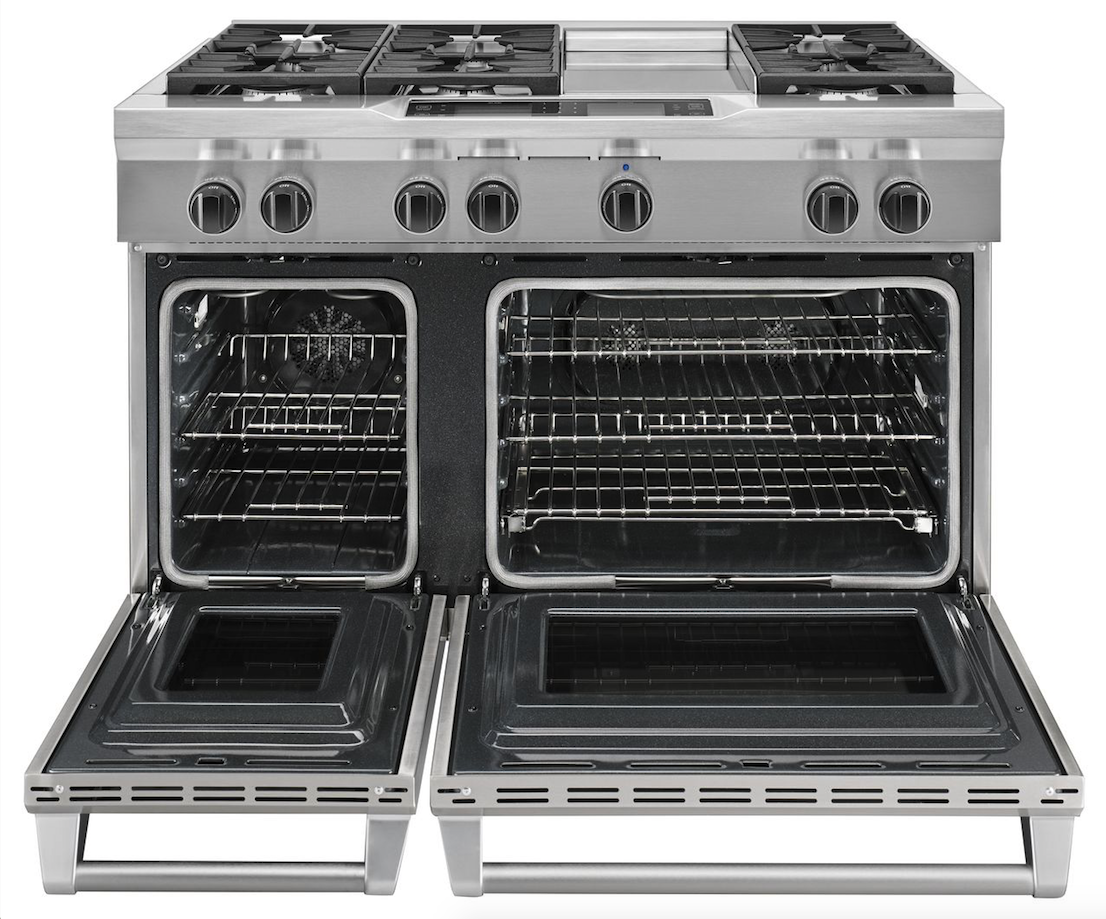 KitchenAid 48-Inch 6-Burner With Steam-Assist Oven: The intersection of high-tech and homey, this range contains steam-assist technology so that cooks can achieve a perfect roast without ever basting. The controls feature an easy, digital conversion system for those older recipes, which weren’t designed for a convection oven, and the chrome-infused griddle prevents any penetration from food or oil and will never turn black, the manufacturer says. 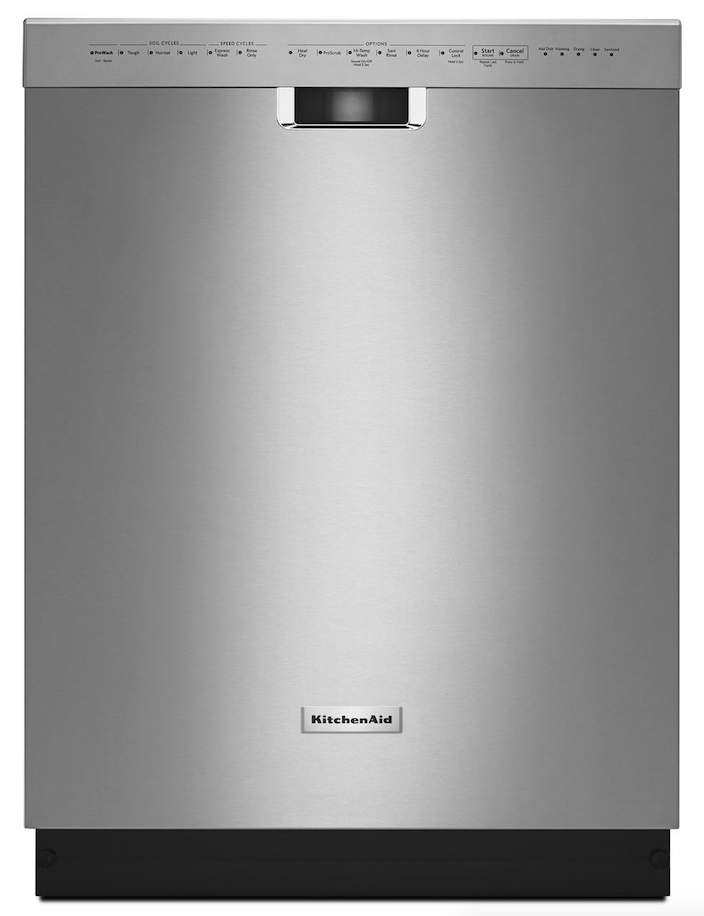 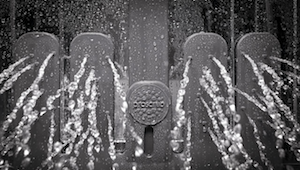 KitchenAid 46 dBA Dishwasher With ProScrub Option: This deep-cleaning dishwasher features 40 spray jets designed to remove baked-on foods. Have a dirty casserole dish? Face it toward the powerful nozzles in back for the most thorough cleaning. The special ProWash feature sets the best cycle based on load size and soil level. The unit also has a third-level rack that’s perfect for long, flat items like silverware. 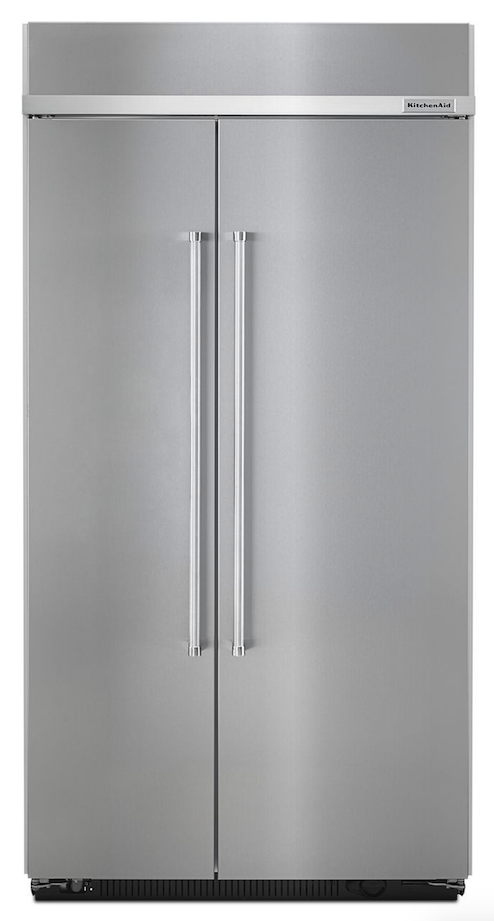 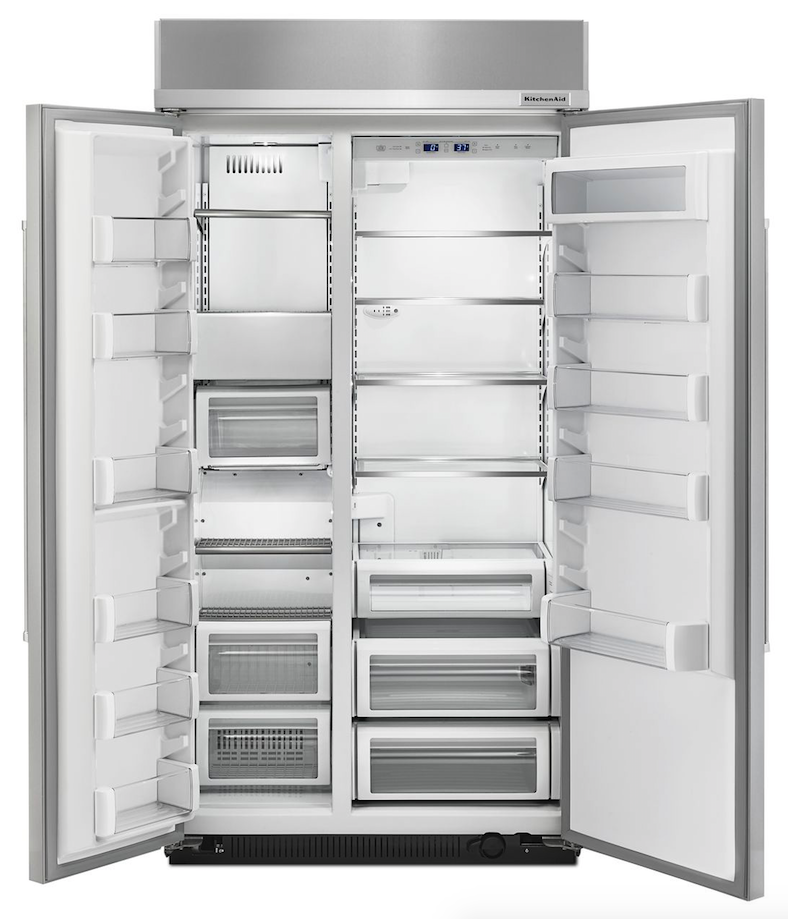 KitchenAid 42-Inch Built-In Side-by-Side Refrigerator: NASA would be proud. A sensor-controlled system ensures that ingredients remain fresh while the Produce Preserver absorbs the ethylene gas from fruits and vegetables to help extend freshness. Even the crisper drawers are state-of-the art, with ball bearing rollers and glides that ensure smooth opening and closing, even when very full. 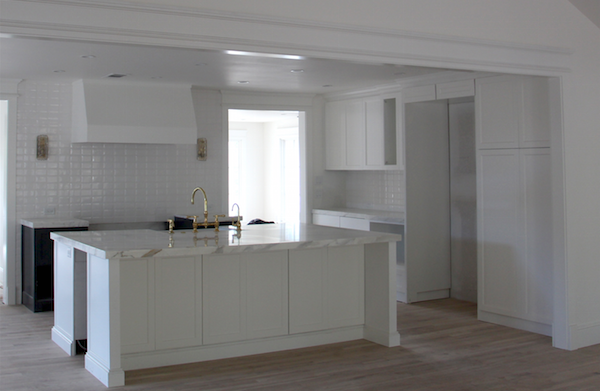 The palette for the Model ReModel is mostly white. “I looked at Benjamin Moore’s color of the year, Simply White, and thought it would be perfect,” Carrie Hatfield says. “There’s another color of theirs, White Dove, that I use all the time for my clients. I almost chose it for this home, but in the end, I felt that Simply White worked better with my accent colors.”

The Simply White is used predominantly on the trim, walls, and ceiling for a consistency of surfaces. “I think it’s a cleaner look to do all three in the same color,” Hatfield says. “Some people still prefer to use different colors for contrast, but it’s more modern to keep it consistent. I like semi-gloss or satin on the trim, and flat on the walls. That gives it a little pop.” But there are some color splashes and surprises here and there in the design.

The cabinet in the breakfast area (below, first photo) is painted with Benjamin Moore’s Black Jack. Although it’s a bold design choice for a kitchen, black can add enormous visual interest and activate the senses. In fact, as a trend, the use of black contrasting with white in eating areas is on the uptick, especially in urban homes.

The pocket doors in the master bathroom (below, second photo) are painted Hale Navy, a deeply saturated shade also from Benjamin Moore. They echo the hue of a cabinet in the front room that’s painted the same color. “For the house to flow,” Hatfield says, “it’s important to pick up different accents from various parts of the home.”

The Hale Navy color provides a perfect counterpoint to the sleek, white Victoria + Albert bathtub. And that deep navy shade also contains an optimal mix of cool and warm tones, so it works well with virtually any lighting. 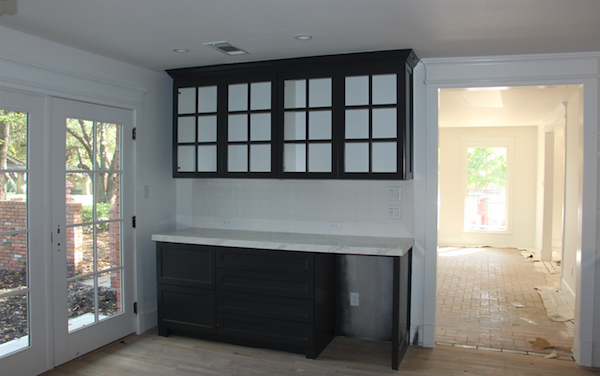 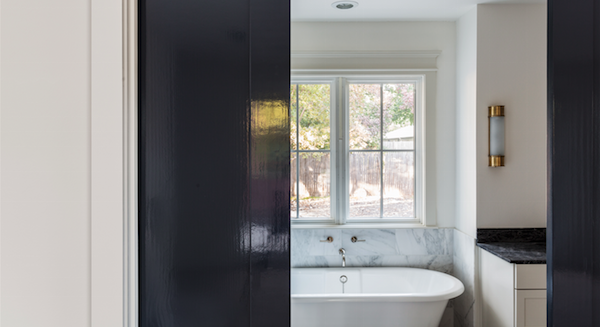 Americans spend many hours a week in their laundry rooms, yet those spaces are often treated as an afterthought and separated from the rest of the home.

Increasingly though, consumers are requesting integrated laundry rooms that are designed with just as much attention as a bath or kitchen would be.

This laundry room opens to the garage on one side and the homeowner’s office on the other. Its layout is perfect for a growing family, since the utility sink can also serve as a handwashing station, a place to soak stained clothes, or even an area to pot plants. Not seen here is an extra surface on top of the Maytag front loaders that’s perfect for folding laundry. Also, low cubbies were placed to help remind kids to drop off dirty clothes. 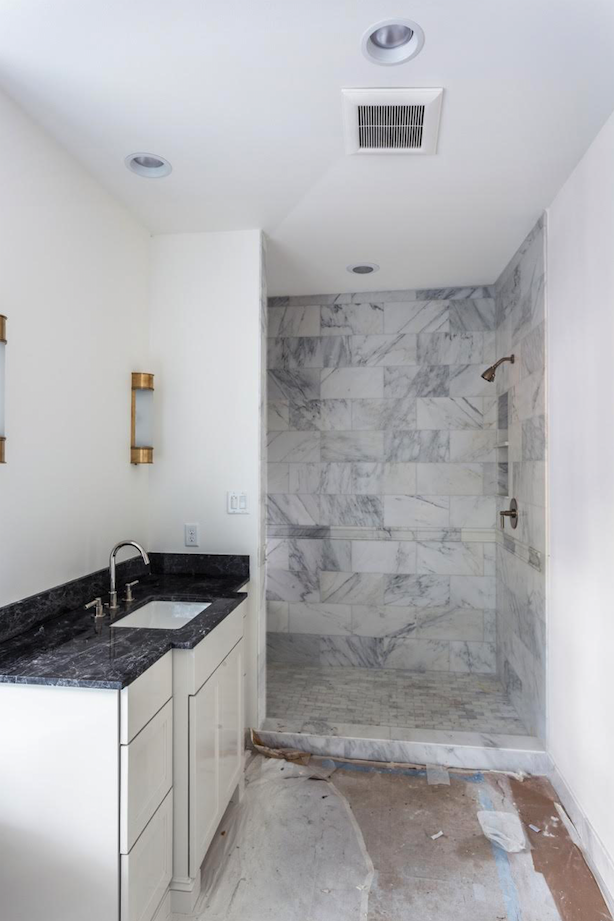 For this project, remodeler Chad Hatfield selected Panasonic’s WhisperFit EZ replacement fan. “The ease of installation is fantastic,” says Dustin Bailey, Hatfield Builders & Remodelers’ production manager. The unit is Energy Star rated, features a Flex-Z Fast bracket with articulating joints designed to make retrofits easier, and the housing is 5 5/8 inches deep, so it can fit in virtually any ceiling cavity, including 2x6 construction. An adapter is also included, so you can use any existing duct, whether 4 inches or 3 inches. And the Pick-A-Flow speed selector switches between 80 cfm or 110 cfm with the flip of a switch. 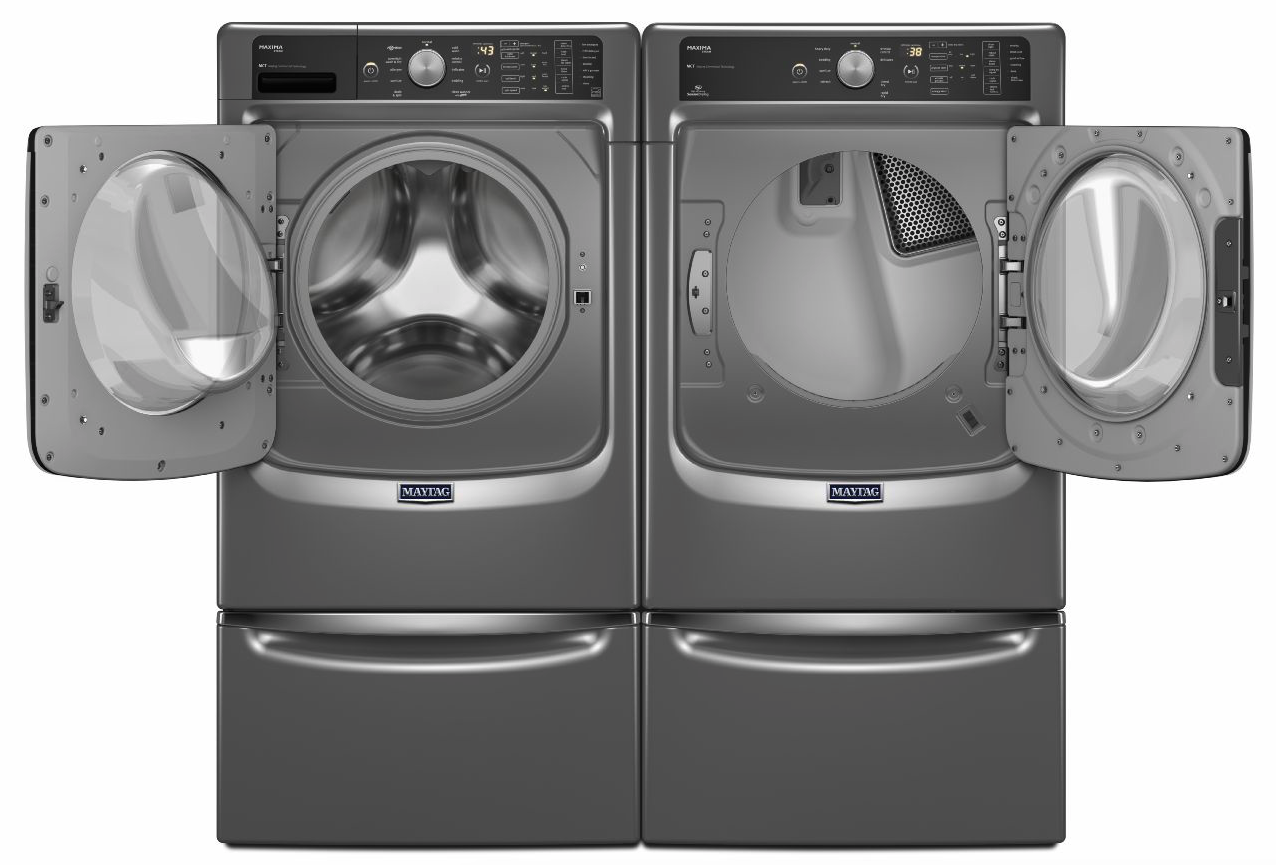 Maytag Maxima With Steam and PowerWash System:  This Energy Star–qualified workhorse is engineered and assembled in the U.S. Its features include an optimal dose dispenser, PowerSpray Technology, and a convenient overnight wash and dry cycle.

Watch videos and find out more about the 2015 Model ReModel