How much is a lead worth? That’s a question Jon Vogel asks every year when it comes time to commit to a marketing budget. Until recently, the answer came from Vogel’s experience as president of New Outlooks Construction, a 32-year-old remodeling company doing $4 million plus in volume in New Jersey and eastern Pennsylvania.

This year the answer came from a Customer Lifetime Value (CLV) analysis of New Outlooks’ historical data by 215 Marketing, a 3-year-old Philadelphia-based agency owned by Vogel’s son, Jon J. Vogel, and his business partner, Garrett Gillin. “The goal was to discover what each type of client is worth to New Outlooks over the course of their lifetime,” says 215’s Vogel. “Once you know that, you can determine what the company should be spending to acquire each type of customer.”

New Outlooks had plenty of data. Counting residential design/build, plus the commercial and handyman divisions, the company annually undertakes more than 500 jobs. But the most accessible records went back only to 2007 when the company converted from paper files and manually compiled spreadsheets to an automated digital system.

First, 215 separated clients by project type, beginning with the initial project completed by a New Outlooks client, then tracked other projects those clients undertook over the lifetime of their relationship with the company. What the data revealed was both the average total revenue a client had generated over eight years, and also the probability that a client acquired for project type X would go on to do project type Y. 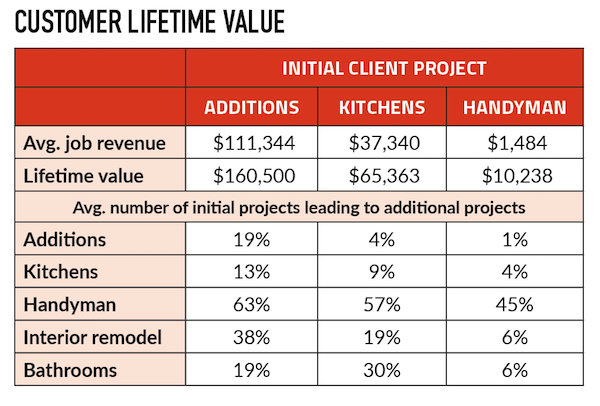 The results were eye-opening (see table, above). For example, the average value of a first-time handyman project is $1,484.62, but when you factor in the subsequent eight years’ worth of projects, the total value averages $10,238.27—almost seven times the value of the original job. “When you realize that a company like New Outlooks does between 200 and 400 handyman jobs per year,” says 215’s Vogel, “we’re talking about a lot of money.”

Equally important is the probability that a client who first undertakes a certain type of job goes on to do a specific second project type. For example, clients whose first New Outlooks project was a kitchen remodel spent an average of $37,340.05, but 30 percent of them went on to remodel a bathroom, 19 percent did an interior renovation, and 9 percent did a second kitchen remodel. Their total spending over eight years averaged $65,363.87.

The data have altered not only how New Outlooks spends its marketing dollars, but also its growth strategy. Increasing handyman business may be a smart move because handyman work generates a higher multiple over time. But kitchen customers spend more than handyman clients. “It’s all about ROI,” says 215’s Vogel. “If we have $2,000 to spend marketing basements or kitchens, and basements lead to 2X and kitchens lead to 4X, it’s pretty clear where we should spend the money.”

It took 215 a couple of weeks to go through all of New Outlooks’ data and build the analytical model. Now they’re working on a template that they believe will be able to make a similar analysis from anyone’s data. And they’re setting up a CRM system for New Outlooks to track data from each newly acquired client and make lifetime value analysis part of an ongoing process.

Vogel understands that his father knows the business pretty well, and like others in the industry, goes by his gut. But times have changed, and the remodeling industry needs to change, too. “For me, as a contemporary marketer, there’s no room for guessing anymore,” the younger Vogel says. “You do what the data tells you to do.”