A luxury golf resort chateau in Pennsylvania gets a facelift

Such a project would not have been complete without replacing the 1,000 window and door openings to the Chateau Lafayette, Falling Rock boutique hotel and the property’s original lodge.

But before the facelift could begin on the aging, leaking and water damaged structures, the resort was determined to find a product that would ensure a tight seal and protect against damage brought on by the region’s heavy amounts of annual snow and rain.

In the end, key decision-makers turned to JELD-WEN windows because of the manufacturer’s partnership with Henkel and its OSI QUAD Window & Door System. 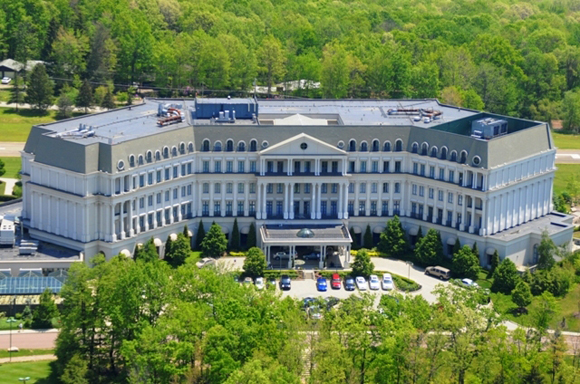 “Nemacolin was concerned about some of the water damage they were experiencing and very concerned about how those openings would be sealed up,” says Paul Majka, an applications engineer for Henkel. “Because of our relationship with JELD-WEN, they called us to provide technical support and provide the product performance to be able to achieve the goal they were looking for. Because of the formulation and advanced technology of QUAD MAX, we are able to offer the kind of flexibility of adhesion that others don’t.”

As part of the partnership between JELD-WEN and OSI, which became official in June 2014, contractors receive hands-on training that covers proper fenestration management and the installation protocol for windows and doors through the OSI QUAD Window & Door Installation Training program. Once training is complete, the contractor is certified as an installer, which then actives the 15-year QUAD Window and Door System Warranty for new construction.

Even with a sophisticated installation process backed by on-site technical support, there often are a few bumps in the road, particularly when working on older structures, Majka says. And the Nemacolin project was no exception.

However, having support from OSI empowered the installers to get assistance before moving forward when confronted with unique circumstances, he added.

“During the project, you run into some challenges, especially when you start to open up things and find stuff that you didn’t expect,” explains Majka.

In one instance, the contractor removed an old window and discovered a foam sheeting he didn’t anticipate.

“Right away he was concerned about the compatibility of the product used against that surface and he didn’t have much time but with some quick checking he found it was compatible,” Majka recalls.

In another case, an installation procedure had to change because of a concern over flashing, but altering the process could have resulted in a faulty install. Thanks to proper hands-on training from OSI, the contractor recognized the issue and immediately called for technical support.

“They stopped and called us and sent us photos, and we came up with an alternative method that still complied with the JELD-WEN window warranty requirements,” Majka explains.

By backing up the product with onsite training and technical support, the installation was validated and the proper application was achieved, he adds.

The project includes replacing 1,000 window and door openings to the resort's boutique hotel