In removing the original windows, workers exposed evidence of substandard installation. The steel lintels had been wrapped with an aluminum siding-type trim coil and caulked to the masonry, which was trapping moisture in the wall cavity. Crews had to remove the work to build a new drainage system.

Three years ago, former St. Louis Cardinals player Mark Reynolds cranked a home run over the left field wall of Chicago’s historic Wrigley Field and through the window of an apartment inconveniently (or conveniently, depending on your level of baseball fandom) located right across the street. It wasn’t the building’s first encounter with a home run ball, but it would eventually prompt Pella Windows to partner with the Chicago Cubs to donate and install 11 home run-proof windows to the building.

Professional Remodeler, which is headquartered in the Chicago suburbs, visited the site as the windows were being installed and had a chance to speak with a representative from Pella, engineering specialist Matt Walden, as well as the installing contractor, Brian LaPelusa, owner of LaPelusa Home Improvement. 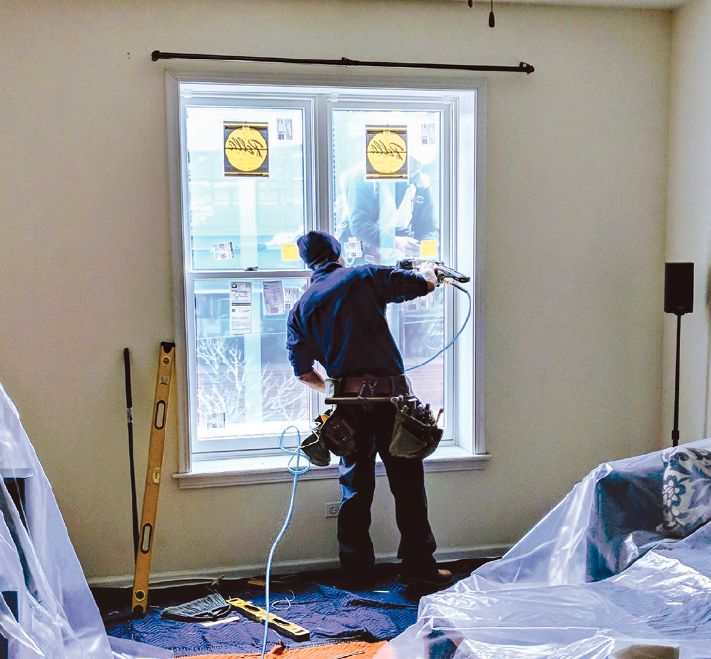 The windows are Pella’s Architect Series Reserve Double-Hung windows, which were chosen because they mimic the building’s historic-looking facade and allow for a full-frame installation that doesn’t much affect the interior millwork—something the installer wanted to preserve.

“The installation was systematic, and a significant amount was done from the exterior, which helped us save the really great look of the interior work,” says LaPelusa. “We started by removing the existing components on the outside, then we detached all the parts, from the sash members, to the parting stops, and so on.”

LaPelusa adds that a big benefit from the Pella windows is ease of everyday use. One needs little more than a “fingertip” to open the window, he says. But what he likes most about the Architect Series, and what he’s found homeowners also appreciate, is how well the windows block sound.

“The biggest improvement is sound control,” LaPelusa says. “The windows are made so airtight that when they’re installed properly you put an end to almost any kind of infiltration.”

But it’s the glass itself, which was customized for this project, that makes the windows home run-proof.

“We upgraded the glass from annealed to tempered,” says Walden. “This type of glass is typically used for front doors and bigger windows. It’s similar to what you’d see in your windshield.”

To make sure the glass could withstand the impact of a home run ball traveling the 400-plus feet from home plate to the building’s facade, Walden and the other researchers at Pella’s testing lab in Pella, Iowa, pored over MLB Statcast data to calculate the likely impact. And then they tested it.

“We saw the data and then, in order to test the windows, we modified a hurricane cannon to shoot baseballs,” Walden says.