One of the slickest systems we’ve seen to keep the area under an elevated deck dry is SpaceMaker decking. The 1-inch-thick tongue-and-groove deck boards are solid PVC with no fillers and an ASA cap. What keeps the water out is the decking’s Super Seal, a unique vulcanized silicone gasket that wraps around the tongue and is held in place via keyways (see illustration, below). When a deck board is installed, the patented gasket system, which the manufacturer claims is resilient from -100°F to 400°F, is compressed against the groove, preventing water from passing through; instead, water follows the channel between boards to the edge of the deck. 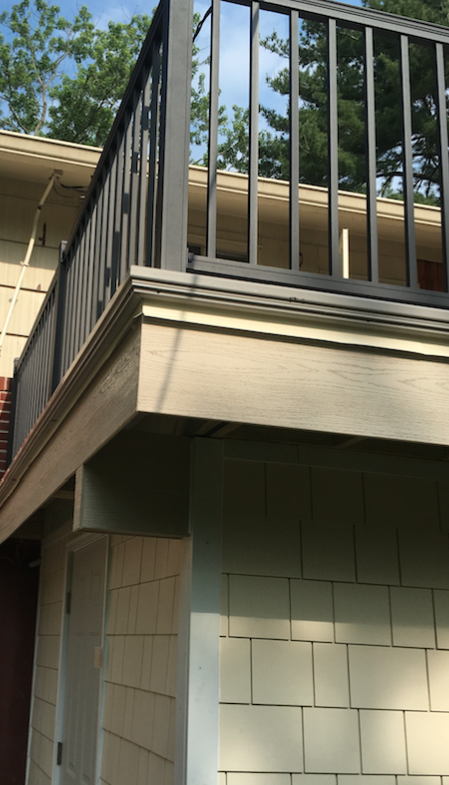 At the perimeter, an optional edge piece performs double-duty, providing an attractive “picture frame” appearance that hides the butt ends of deck boards and allows water to drain from the deck surface via slots spaced 4 feet on center. The water can be allowed to simply fall to the ground, or it can be captured by a gutter and directed to a downspout. The manufacturer also offers an optional “waterbox” concealed gutter system.

To learn more about installation, we spoke with Dave Lombardo, president of American Deck and Patio, in Maryland, who has extensive experience with the SpaceMaker system. One of our concerns was flashing at the ledger, a challenge for every deck. Lombardo says he has had problems at the ledger with hollow-profile, self-draining deck boards and under-deck drainage systems. “One of the best features of the SpaceMaker board is that it’s solid,” Lombardo says. “That gives it a superior ability to be cut, caulked, and flashed at the ledger.” SpaceMaker specifies Everflashing Deck Ledger Flashing, an aluminum flashing shaped like an upside-down uppercase letter “F,” and instructs installers to set each deck board in a bead of OSI Quad Max caulk.

In terms of price, Lombardo says SpaceMaker Outdoor Flooring is about twice the cost of other composite decking. “But if you then have to use an under-deck drainage system, your total installed cost would be higher,” Lombardo points out. “And you still have an inferior product.” That savings in labor takes into account the extra time Lombardo’s crews spend testing for leaks by pouring a cup of water on every board as it’s installed. Another savings Lombardo notes is the fact that the decking can be fastened with standard 2-inch deck screws driven at an angle through the tongue, where they are concealed by the next board.

SpaceMaker decking comes in two variegated colors, Tropical Brown and Nantucket Gray, in lengths of 16, 20, and 24 feet. Square-edge 1x6 boards are available for use as stair treads or trim, and the system is compatible with virtually any railing system.

Over the last few years I've used SpaceMaker on many decks in the NJ area. Works awesome. WaterPROOF and extremely durable and beautiful. Every customer is very happy. Easy to install. Their customer support is fantastic. It's the ultimate decking product.