How Homeowners Choose a Remodeling Company

Jeb Breithaupt had high hopes for his website when he put it online in 1997. He peppered the site with photos of custom kitchens and bathrooms he had designed, then waited for an outpouring of leads.

“I can count how many sales I’ve made from it on one hand,” says Breithaupt, the owner of JEB Design/Build, in Shreveport, La. “People will look at pretty pictures, but pictures don’t make the phone ring.”

A new survey from Internet marketing agency Contractor Nation confirms that insight. While “photos are a big, big deal” to homeowners searching for kitchen remodelers, they’re not enough to convince would-be clients to pick up the phone, says Rick Cleri, general manager of the Seymour, Conn., firm.

Yet homeowners aren’t relying solely on the contractor’s website for that gorgeous kitchen. While the “money” demographic—homeowners aged 35 to 54—looks first to friends, family, and contractors they already know for referrals, younger homeowners tend to put more trust in the accuracy of online reviews. “Kids have grown up in this trusted Google world,” Cleri says, “and that’s what they believe.”

Cleri’s advice to remodelers is to apply “a low-tech solution to a high-tech problem.” Ask satisfied customers —lots of them—to post their praise online. “It’s about having profiles on all of these sites,” Cleri says. “Clog up those … sites with your own customers,” he advises, so those positive reviews are the first thing shoppers see wherever they look.

Customers are most likely to post online reviews if the crew foreman who worked in the house and dealt with the family almost every day makes the request, Cleri says. And that request should be clear: Ask the homeowner to post on specific sites—including the contractor’s—and to name the foreman in their testimonial. “It works all day long,” Cleri adds.

That’s not to say contractors should stop posting show-stopping photos online. More than 40 percent of the homeowners surveyed said that they’re looking for examples of the remodeler’s past work when they visit a website. But they want to see more than “pretty pictures”; they want to see the “before” shots, too.

And they want to see video testimonials from past customers in their new kitchens saying how much they love what their remodeler did and how great it was to work with the crew. The combination, Cleri says, “breaks down their resistance,” especially if the satisfied homeowner lives near the potential new client. 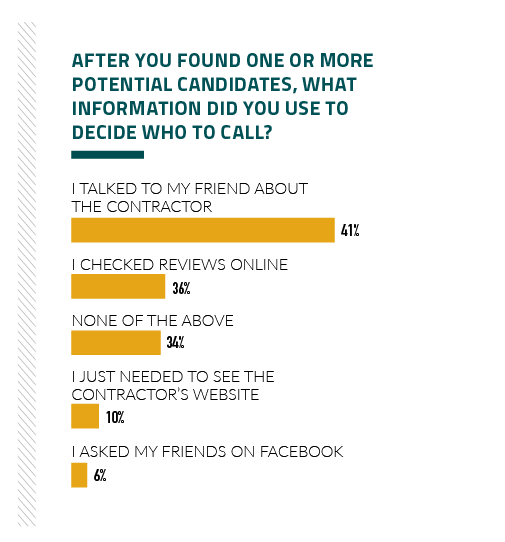 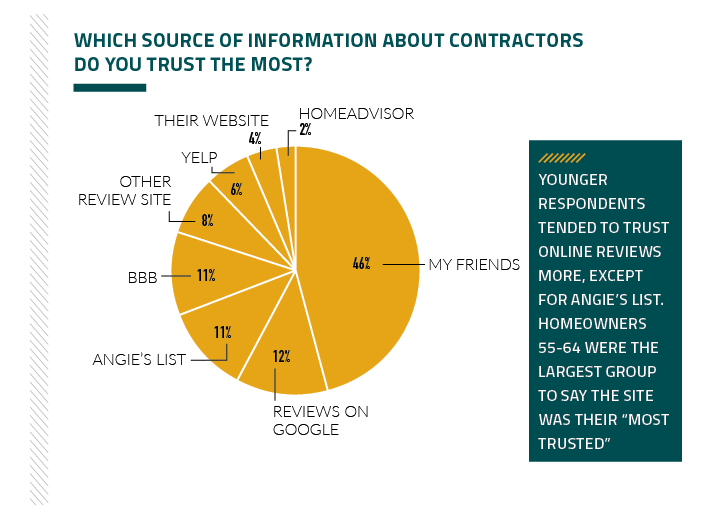 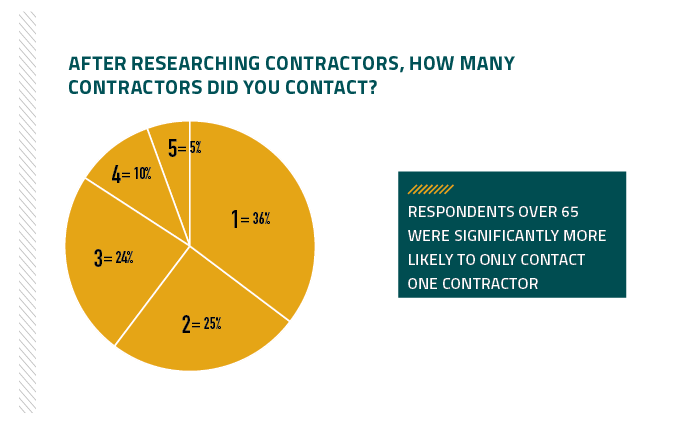 To that end, Cleri recommends that contractors prominently display a map of their service areas so that online shoppers will know at a glance if they live in an area where the remodeler works. On the websites that Cleri’s company has designed, he says, one of the most-clicked features is a drop-down box with a scrollable list of all cities in which the remodeler works. Another popular feature is a list of the remodeler’s services.

Some of Cleri’s sites also feature “geo-targeting’; that is, the site can determine where the visitor is located and automatically sends that city to the top of the scrollable list. He says that tactic is 80 percent effective, and notes that consumers will convert from shoppers to buyers at four to five times the industry average if they see their own city at the top of the list and can easily determine that the contractor offers the services they need.

The cherry on top, Cleri says, is to post photos and testimonials from every part of the remodeler’s service area. For example, someone who lives in College Park, Md., and is looking for kitchen cabinets is most likely to hire a remodeler whose website shows at a glance that the company specializes in cabinets, works in College Park, has satisfied customers in that city, and has transformed “before” College Park kitchens into breathtaking “afters.”

It turns out that the Internet isn’t the first source most homeowners consult when they start their search for a contractor. The survey reveals that more than 42 percent ask a family member or a friend for a referral before they ever turn to their computers. And nearly 28 percent ask a contractor for a recommendation—before looking anywhere else.

“We think everything starts on the Web, but that’s not the case,” Cleri confirms. In fact, just 13 percent of homeowners in the survey reported that they began their search for a remodeler on Google. And especially for customers seeking design/build firms and trades like roofers, siders, and handymen, Cleri says, “Google isn’t their first go-to.” 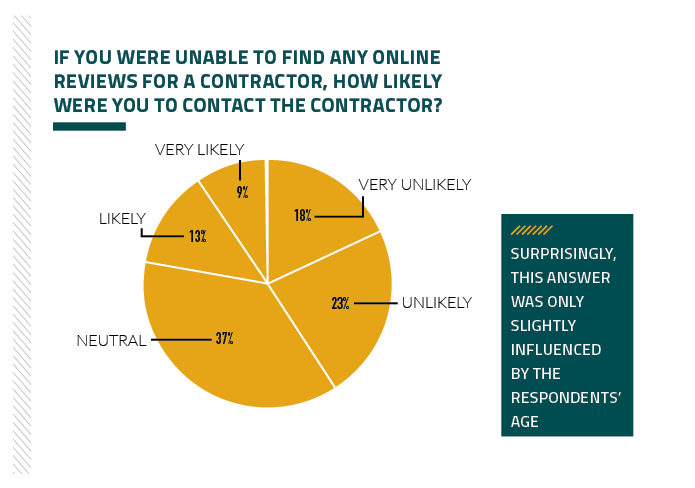 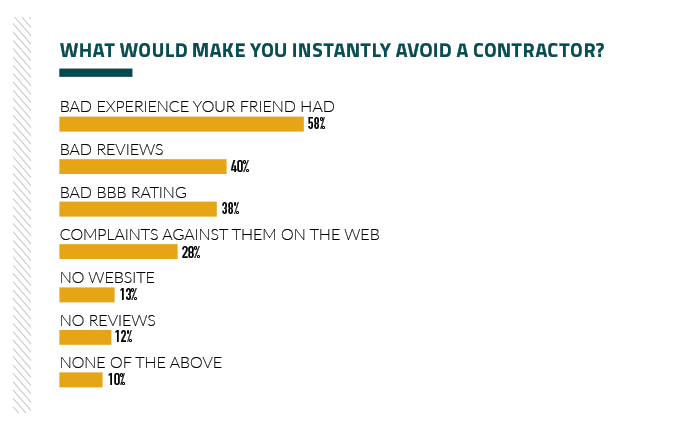 Still, homeowners don’t stop their search after contacting one remodeler, the survey reveals. Nearly 46 percent of shoppers continue researching contractors online, even after they have reached out to one they think they’ll like—sometimes even after they get a quote. They may be comparison shopping for a lower price and likely are continuing to read online reviews.

“This is not a one-stop shop,” Cleri says of the consumer’s decision-making process. “People are on a journey. They’re dealing with this trust issue.”

Make It Clear, and Call Back

One of the biggest flaws on remodeler websites, according to Cleri, is the lack of contact information. “Don’t bury it,” he says. And don’t limit potential customers to filling out an online form and waiting for a callback.

Instead, he advises, post the company’s phone number in large type in the upper right-hand corner of every page on the website. Right next to it, post the office hours so the shopper knows when someone will be available to answer the phone.

Next, he says, make sure that someone is actually answering the phone. “How much business are you losing by not answering the phone?” he asks. In the time it takes for a remodeler to retrieve a voice mail and respond to it, after all, the customer can call another remodeler who picks up the phone on the first ring.

Breithaupt requires that his staff promptly answer each phone call. On his company’s website, in fact, viewers are prompted with a choice of calling, emailing, or filling out a form. “We want them to call us,” he says, “but some people are really scared of salesmen. So we give them options.” Potential clients who contact JEB Design/Build, are then presented with more options: They can receive material in the mail or download it; they can come to the office to talk with the staff; or they can make an appointment for an in-home consultation. “We give them multiple ways to do business with us,” Breithaupt says. 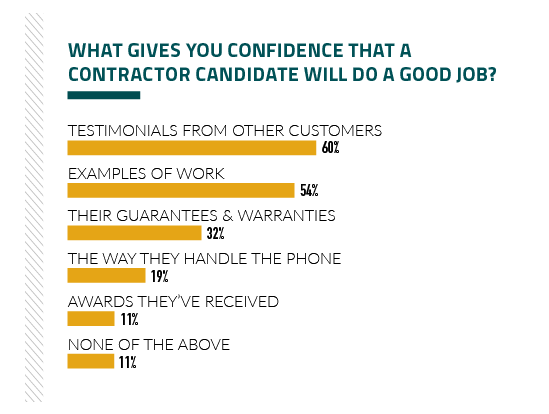 All of those tactics create leads for remodelers, Cleri says, noting, “You want a few leads; you don’t need hundreds of leads to do your business.” So why omit something from the website that could turn even one potential perfect match away?

And to contractors who haven’t posted websites yet, he points to a survey result that says “no website” is a top reason why a consumer would automatically reject a contractor. Others: no online reviews, a bad BBB rating, a friend’s bad experience with the remodeler, or complaints posted online by past clients.

Marketing to a Growing Demographic

Everyone wants to understand what’s important to people looking at their website. But some demographics are more difficult to target than others. For many remodelers, one of the toughest nuts to crack is universal design.

Long thought of as a niche market only affecting older adults, universal design is actually a concept that has an impact on people of all ages. However, it needs to be messaged differently depending on the homeowner’s demographic. 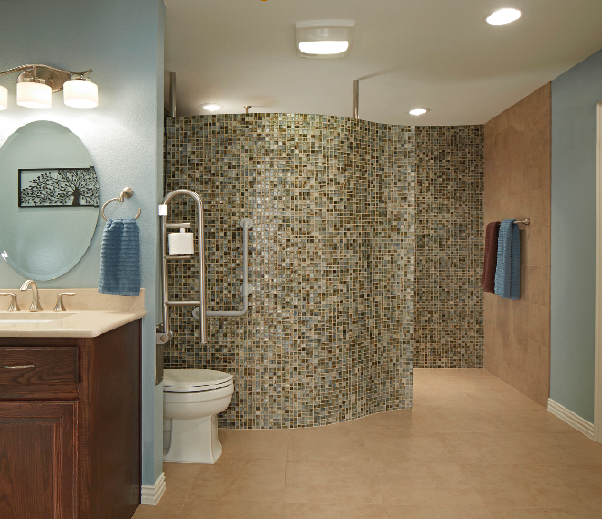 BRY-JO Roofing and Remodeling won a regional CotY award from the National Association of the Remodeling Industry for the bathroom seen here. The client was increasingly challenged by mobility issues, “but no one wants a place that says ‘Oh, an old person lives here,’” says Maria Harris, kitchen and bathroom designer with BRY-JO in suburban Dallas. To solve that issue, she created a gracefully curving wall with contemporary flair.

Another important thing about this group is that often you’re not only selling a remodel to them, but to their kids as well. Gen-Xers and younger Baby Boomers are frequently involved in the decision-making process as their aging parents consider changes that will allow them to stay in their homes.

“One reason universal design has been slower to move into the renovation process as opposed to new construction is that Gen-Xers are taking care of their parents who are aging in place,” Harris says. “Sometimes they have a little trouble wrapping their minds around the home modifications. But for new construction, universal design has had an impact for at least 10 years. Newer homes have larger doorways and halls as a standard. It’s not an ‘ADA house,’ it just is.” —Erika Taylor

How Homeowners Choose a Remodeling Company Using Sales Tools to Stand Out