When Peter and Donna Blyth decided to remodel their 1994 home in Valrico, Florida, they knew that one of the first things they wanted to do was update the kitchen. The existing kitchen was a good size but was outdated and did not flow easily into the nearby dining area. The Blyth’s contacted Mike and Mindy Schoch, owners of Stylecraft Cabinets in Temple Terrace and Daniel Gonzalez, licensed contractor and owner of Daniel Roman Construction, Inc., in Tampa.

The idea was to create a modern, open-concept kitchen and dining space for cooking delicious meals, gathering with their growing family and entertaining friends.

A long bar separated the kitchen and dining areas and gave the kitchen a cramped feel. The kitchen had limited natural lighting, the flooring needed to be updated and the wallpaper had faded over the years. In addition to being outdated, the dining room was in desperate need of ceiling repair due to damage that occurred when a large oak tree came crashing down onto the roof. 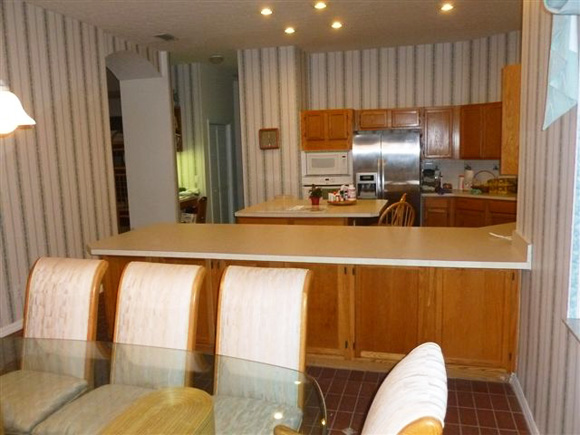 The kitchen before the remodel. Photo courtesy of Wellborn Cabinet

Working closely with Stylecraft Cabinets, Mike helped the owners create a design tailored to their needs. The kitchen was completely gutted, and the project came to life. They chose Wellborn cabinetry that included 36-inch and 42-inch staggered wall cabinets, cushion close doors & drawers, crown and light rail moulding and under cabinet lighting. Wellborn’s Savannah door style in Maple finished with a Hazelnut stain and Charcoal glaze gave the Blyth's kitchen the elegant, warm feel they were looking for.

The Blyth's wanted a neutral palette for their kitchen and chose granite in earth tones and ceramic tile in neutral colors. The bar was removed which immediately opened the room up. The faded, outdated wallpaper was removed which gave the room a fresh look and seemed to instantly add wall and cabinet space. 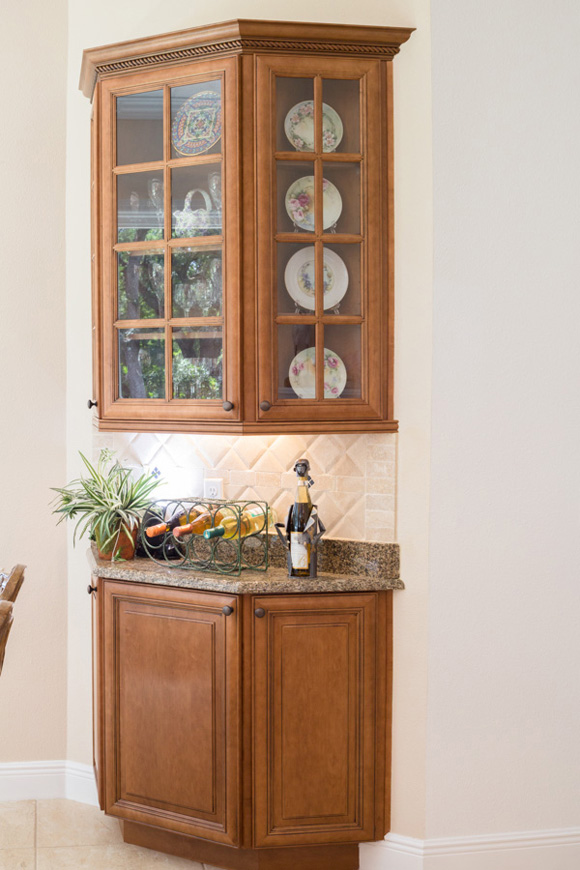 An off-centered window over the kitchen sink was replaced by an enlarged picture window, allowing for natural lighting and a perfect view of the owner’s spectacular yard and hummingbird feeder. A new kitchen island was installed. A new stainless steel refrigerator was relocated to another part of the kitchen and given a built-in look. Relocating the refrigerator allowed for additional wall and cabinet space. A magnificent Wellborn range hood to match the cabinets and a custom backsplash were added and now stand out as a focal point in the kitchen.  Pendant lighting completed the ambiance they were seeking.

The final outcome was an impressive kitchen that now has plenty of room for the owners to comfortably host fun family get-togethers and fantastic dinners with friends.

Describing their new kitchen/dining areas as open, airy, modern and functional with lots of natural lighting, it’s now the exact style they were looking for and makes the most of their spectacular view.

A home can look much more modern with the right remodeling strategy and products.