Estimating is getting easier, thanks to iPad apps such as Go Figure from Construction Solver. The app calculates exterior or interior dimensions from photos taken using the iPad’s camera while in communication via Bluetooth with a laser measuring device called Spike made by IkeGPS. Go Figure integrates with Spike and the iPad’s touch-screen functions so that counting windows or measuring square feet of wall area or linear feet of trim is a simple matter of manipulating on-screen graphics.

In a recent collaboration with Construction Solver, Louisiana-Pacific has created the LP SmartSide Smart Estimator, a version of the Go Figure app pre-populated with siding, trim, fascia, soffit, shakes, and panels from the LP SmartSide engineered wood product line. When I asked for a demonstration, Greg Farnell, managing partner at Go Figure, and Rick Marsh, R&R segment marketing manager for LP SmartSide, arranged for an hour-long walk-through via screen-sharing. Here’s what I learned.

In the field, the process starts with photos of the house taken using an iPad with the Spike laser measuring device attached to the back using double-sided tape (a clip for an iPad case is in the works). The photos can be taken from some distance away and the app maintains 90 percent accuracy at angles of up to 60 degrees. Long elevations can be captured by taking several photos and using doors or windows to mark the splits. 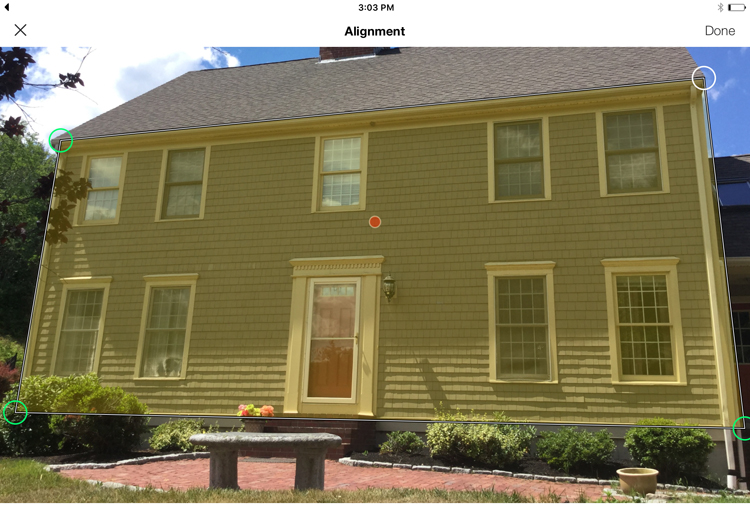 The next step is to use the Align function to create a box with corner handles that you can stretch to match the shape of the elevation. The app then scales and adjusts the image into a straight-on perspective. The app is now ready to make take-off calculations.

To begin estimating siding, for example, choose the Add Item menu, select Area, then select the type of material. (As mentioned, LP has preloaded its version of the app with its SmartSide product line, but users can customize the database to include other materials as well.) This process activates the touch screen, so take-off is a simple matter of tracing lines over the on-screen photo image to outline the area to be calculated. The app does the rest.

Choosing the Count option adds to the take-off the number of items, such as lights or outlets, that you touch on the screen. Choosing Linear from the Add Item menu yields total length of material. To estimate window trim, for example, select the type of material, zoom in on the screen, and outline the window.

Go Figure makes good use of the long press touch-screen command to open menus—in this case, a menu that enables the user to duplicate the outlined object. This speeds the window outline process by copying the outline you just drew, which you can then drag into position over windows of the same or similar dimension.

Go Figure’s tagline is “The contractor’s mobile office” because of what goes on in the background. Every new item added to the estimate creates an entry on a proposal using specifications that the user can customize, and updates a worksheet with a complete bill of materials and pricing, which can also be customized. Any of these elements can be edited on the fly to take account of special circumstances, for example, or to add a one-time item or to change pricing. The final report can be shared via email or printed on the spot and left with the client, reducing time spent in the office.

Go Figure is particularly well-adapted to a single-line remodeling business such as siding, roofing, or window replacement, and the pricing structure reflects that. In addition to the onetime cost of the Spike laser ($350), a subscription to the app goes for $75 per month for up to 50 jobs per month; $100, for up to 75 jobs per month. That seems reasonable for a siding company that’s actually selling 50 jobs per month, but for a full-service remodeler selling just 25 or 30 jobs a year, it may be a little steep, even though those jobs are larger. (LP picks up the tab for LP BuildSmart certified contractors.)

In any case, the convenience of being able to estimate from on-screen photos is a plus that’s hard to ignore. Replacement companies like the ability to create a complete, detailed proposal on the spot, but full-service remodelers may appreciate it for the opposite reason—the ability to take a few photos at several different projects, then head back to the office to do all of the take-offs. Efficiencies like these may offset the cost.