A simple way to check for continuous air, vapor, thermal, and drainage layers There’s a lot of confusion around how to treat the building envelope. Despite everything that’s been written about air sealing, insulation, and drainage planes, a lot of myths persist. Perhaps that’s because the science gets lost in minutia, or maybe it’s just our tendency to reject facts that call into question what we think we know. Then, too, as the number of material choices increases, product selection, compatibility issues, and installation details can be tedious. It all seems so complicated.

But the rules are really quite simple. Let’s start with some basic concepts using a metaphor I call “The Naked Carpenter in Minnesota.”

Air sealing. Our carpenter goes to work in the dead of winter wearing nothing but plastic wrap. He is perfectly air sealed, but he quickly freezes to death.

Insulation. Our carpenter goes to work wearing nothing but a fluffy fleece body suit. He is warm for a while, but the wind blows right through his suit, and after a few hours he freezes to death.

Insulation plus air sealing. Our carpenter goes to work wearing a fluffy body suit under a hard shell. He works all day, warm and dry, and goes home happy.

Super insulation plus air sealing. Our carpenter gets a gig in a really cold place, like Newfoundland or Antarctica. He wears a super-insulated down suit with a hard shell. Warm, dry, happy.

The North Face and Mountain Hardware have the whole insulating and air sealing thing down pat. Our carpenter’s skin corresponds to a home’s vapor-permeable drainage plane, to which insulation (his fleece) and air sealing (his windbreaker) are added. Unlike our carpenter, on a house, it usually doesn’t matter where you put air sealing in the assembly, as long as it’s included somewhere. Insulation, on the other hand, belongs on the outside of the structure, where it’s continuous, not on the inside, where it’s interrupted by the framing.

These are simple rules that we didn’t understand for a long time, and that we still tend to ignore. But virtually every building failure is a result of breaking these rules. 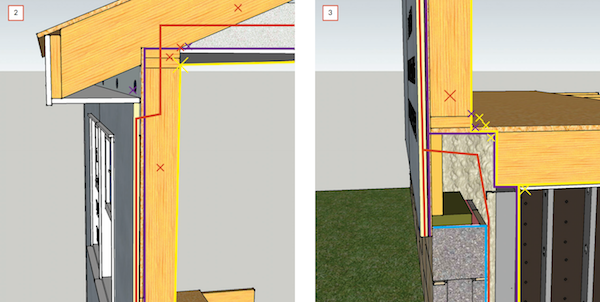 The focus on energy efficiency often centers around how much insulation we need, but that question reduces treatment of the building envelope to a calculation of the depth of the stud bays. As our Minnesota carpenter showed us, however, other factors, such as air movement and moisture, are in play.

How much insulation do you need? Probably more than you have but less than you think you need. It’s the wrong question—or more accurately, it shouldn’t be the first question. Instead, we should focus on determining “continuous insulation value,” which considers all of the factors affecting the building envelope.

Here’s a simple tool that will allow you to identify 99 percent of potential envelope problems in any project. Get four pens in four colors. Now take out the plans and, without lifting the pens from the paper, see if you can draw an uninterrupted line around the structure to mark each of these four control layers:

Work with 3-D views [1, main image] as well as floor plans and sections through walls, floors, and roofs [2 & 3, above] to visualize tricky intersections. Wherever your pen encounters an obstacle, make an “X” on the paper—those are the problem spots. The more X’s you have, the more lipstick you will need for that pig.

Michael Anschel is president of Otogawa-Anschel Design+Build in Minneapolis, and a founding board member of Greenstar.