Counterfeit Products in the Spotlight

At this year’s Ambiente consumer goods trade show in Frankfurt, Germany, attendees from around the globe bore witness to the spectacle that is the annual awarding of the “Plagiarius” prize. The “honor” calls out the world’s most brazen copycat products and their manufacturers. Two counterfeit faucets were among the 10 consumer goods recognized this year. Both serve as a reminder to the entire remodeling industry.

The counterfeit faucets were designed to mimic two popular models: Hansgrohe’s Axor Starck V, known for its signature glass tap; and the Hansgrohe Metris Classic. “Brands and products that are particularly successful in the market, as in the case of [these two] are always the ones to be imitated or copied,” says Carmen Vetter, head of Hansgrohe SE’s Proprietary Rights Department.

But the copies aren’t perfect. Indeed, they’re more akin to poor clones—similar in nothing but looks.

Speaking specifically to the Metris model, Vetter highlighted multiple deficiencies in its shoddy counterpart. The Metris Classic faucet allows users to adjust the intensity of water flow and also features a detachable spout, anti-limescale function, and a hot-water limiter. The counterfeit has none of those capabilities. 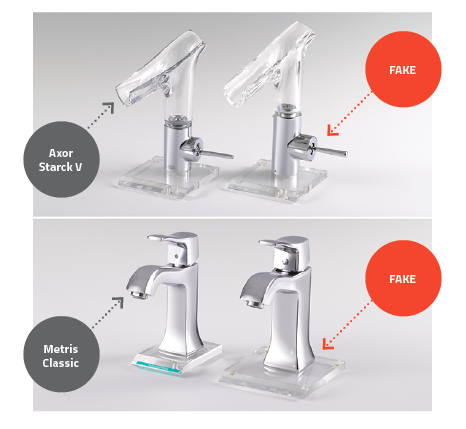