When I was kicking around the idea of building a small mother-in-law cottage on our 2-acre lot just outside of Omaha, Neb., I checked my local city codes for regulations. Unfortunately, I came up empty-handed. In my Midwestern city, with a population of more than 400,000, there were no city codes on the books for accessory dwelling units.

An accessory dwelling unit (ADU) or second dwelling unit (SDU) is a dwelling on the same lot as a primary residence or a separate unit attached to the main house. Commonly called mother-in-law suites or backyard cottages, the small buildings are often used as a guesthouse, home office, or rental income property. As our population ages, the necessity to house elderly parents is also driving the demand.

A 2016 report from the Pew Research Center shows that the number of Americans living in multigenerational households has ballooned, rising from 51.5 million in 2009 to more than 60 million in 2014. The perfect storm of an aging population, growing popularity for tiny-house living, and a shortage of affordable homes in many communities, has resulted in a surge of interest in ADUs. And because the projects are often too small for large builders to take on, remodelers are seeing the biggest increases in requests.

A good portfolio-builder—and not just for builders

Austin, Texas-based architect Davey McEathron, who specializes in ADUs, believes they can be a great market for new businesses. “ADUs are a nice addition to your portfolio,” he says. “They allow you to do something on a smaller scale as you’re learning the process of building and construction.” According to McEathron, ADUs in Austin have filled an urgent need for affordable housing in the community.

“Building an ADU takes no special skill set, it’s just building on a smaller scale than your regular home,” says Eli Spevak, owner of Orange Splot, a development and general contracting company in Portland, Ore. Spevak is also co-founder of AccessoryDwellings.org, an online resource for ADUs. “It’s a great avenue for local builders, especially mom-and-pop builders, to add something to their mix,” Spevak says. “The same home remodelers who are asked to do kitchen remodels or home additions could also specialize in ADUs for more flexibility and revenue.”

The desire for homeowners to have aging parents live close by, but not in the same house, is one strong trend driving the demand for ADUs. The rising cost of assisted living coupled with the desire to keep parents’ care within the family has created an escalation in requests for ADU permits in many communities, as well as confusion around outdated or nonexistent codes.

Brandon Garrett, city planner with the Lincoln/Lancaster County Planning Department, in Nebraska, is currently working to revisit local ADU codes, which have limited building in the past. “We generally get about six requests a year,” he says, “but we don’t know how many people don’t materialize because they ... know they are not allowed or they tried to get a building permit, were denied, and gave up.” 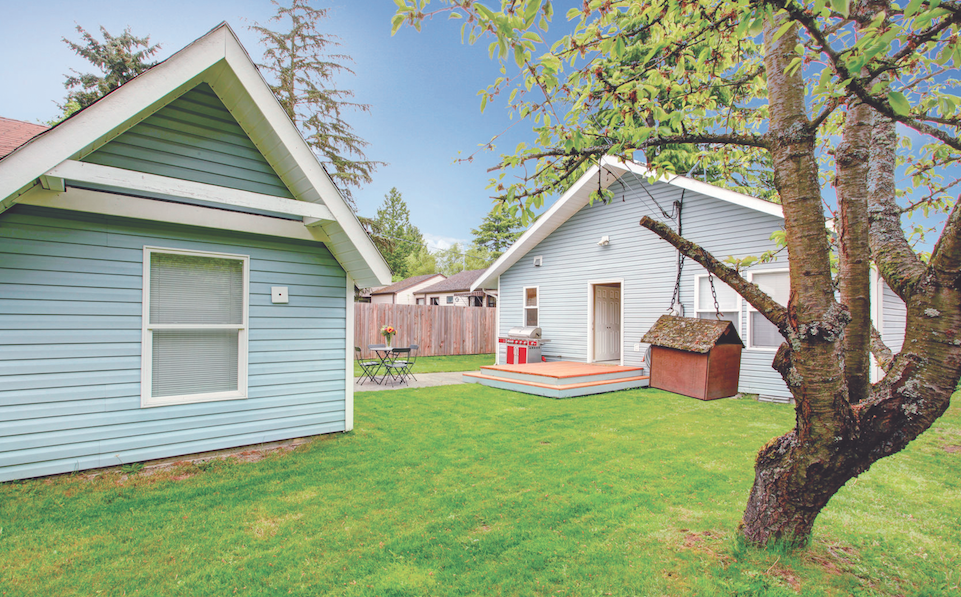 Lack of ordinances a hindrance for remodelers

Remodelers interested in entering the ADU niche may find local ordinances a hindrance. Many communities are faced with stringent zoning ordinances that make building an ADU difficult, if not impossible. However, with the rising demand from homeowners and builders, many municipalities across the country are loosening their rules to more easily allow ADUs. In New Hampshire, Gov. Chris Sununu signed a statewide law that ensures every municipality with a zoning ordinance “shall allow accessory dwelling units as a matter of right ... in all zoning districts that permit single-family dwellings.”

Garrett, the city planner, says he has begun holding weekly meetings in Lincoln, Neb., and hopes to have a draft ADU proposal soon. “We have a group of about 10 people [working on this] comprised of a builder, a remodeler, a senior-care rep, an architect, and neighborhood folks,” he says.

Some of the code issues the group will address are maximum size, maximum height, design standards, utilities, and occupant requirements. Most municipalities require that the lot owner live on the property, either in the main house or the ADU. Both Garrett and Spevak believe an inclusive process is essential as zoning ordinances are written or revised, particularly as regards local builders.

“When Portland decided to work on its city code updates, we invited people in the industry to revise and refine the rules for ADUs,” Spevak says. “We had architects and contractors offer their expertise.” Portland eventually eliminated the existing barriers to building ADUs and saw permit requests skyrocket. The city is now considered by many to be the most ADU-friendly in the country, and it has helped give rise to a cottage industry of remodelers and small home builders who have experience building ADUs. 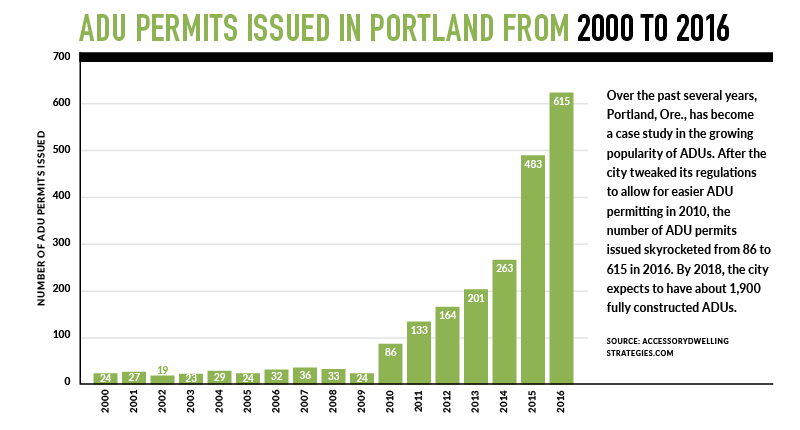 Get involved and take action

When asked about what remodelers should do in locations where ADUs aren’t yet on the books, Spevak urges companies to get involved in their city’s code changes. “I’d suggest to those remodelers who have clients interested in building an ADU, to contact their planning department and say, ‘Hey, there are some great models out there for ADUs.’” Spevak recommends that in their arguments, remodelers and builders focus on the advantages of ADUs: flexibility in housing makes sense for environmental, lifestyle, and financial reasons. ADUs are also a way to add density and diversity to older areas that may be in decline, revitalizing neighborhoods.

As cities across the country confront the rising demand for ADU permits, now more than ever it will be important for remodelers to get involved in making those decisions. “All across the country, cities are either writing new codes or modifying old ones,” Spevak, a fan of simplifying codes, adds. “Remodelers need to be part of that process.”

ADUs vs. Tiny Houses on Wheels

Confusion abounds regarding the differences between accessory dwelling units and tiny houses on wheels—and that’s understandable because it is confusing. They look very similar and, in many ways, they are very similar. But the key differences come in their assembly.

·    Approved by the local building department

·    Electricity, water, and sewer utilities are in place

·    Are not built to local building codes

·    Have no permanent foundation

·    Are not tied into the utility grid

·    Are considered to be in the same category as campers, RVs, and tents

It should be said that a tiny house on wheels can be converted to an ADU, but the work would be such that simply building a new ADU would probably be a better option.