Decks can last a long time, but after 10 to 20 years, it’s not uncommon for cedar, pine, or redwood to start disintegrating in ways that range from unsightly and inconvenient to downright dangerous.

“I’ve seen decks built two years ago that we couldn’t do anything with, and decks built 50 years go where the frame was perfectly fine,” says Phil Brown, owner of Archadeck of Central Connecticut, in Wallingford.

The last thing many homeowners want to hear is that they have to replace an entire deck. But sometimes, for safety reasons, there’s no avoiding replacing deck boards. While there are no clear statistics on how many people are injured annually in a deck collapse, the U.S. Consumer Product Safety Commission conducted a study, which found that 33,270 people were hurt by the structural failure of a deck or porch between 2003 to 2007. And that number is probably conservative, since the data was collected by hospital emergency personnel and so excludes anyone who didn’t seek immediate medical care, as well as anyone who didn’t clearly specify that the deck had actually broken.

But what is clear is that a homeowner can sue for damages. The Atlanta law firm of Kalka & Baer even advertises deck collapse litigation as one of its specialties. And if someone sues, that would quickly become the deck contractor’s liability.

What’s Obvious, and What Isn’t? How to replace deck boards

Publicity around deck collapses has prompted many municipalities to tighten their deck construction standards before permits are issued. “Today, they’re big on strapping things down,” says Lou Pagnutti, whose Decks Unique, in Commack, N.Y., has been building decks on Long Island for decades. Still, on Long Island, which is full of homes built during the last 50 years, Pagnutti estimates that about half of his deck calls involve a request to replace the boards and rails on an existing structure, that is, a re-deck. “We inspect the understructure,” he says, which typically involves removing deck boards. “If it’s an iffy situation, we replace it.”

The difference between the cost to replace deck boards and rails versus rebuilding from the ground up is often significant, and many homeowners will balk at being told they need a new deck. “We will [only] do a major repair if the deck is young enough for us to feel confident,” says Bryan Miller, president of Outback Deck, in suburban Atlanta. “Young,” in this context, means five to eight years old. Miller wants to know that the deck can be re-planked and a new rail system added without compromising the security and stability of the structure.

“Most people will ask: How much is it going to cost, and when can it be completed?” Miller says. “What we know is that we need to think about it differently.”

Outback Deck sticks to the book when replacing deck boards, using a six-page deck inspection form from the North American Deck and Railing Association (NADRA). The inspection focuses on five specific areas, three of them, 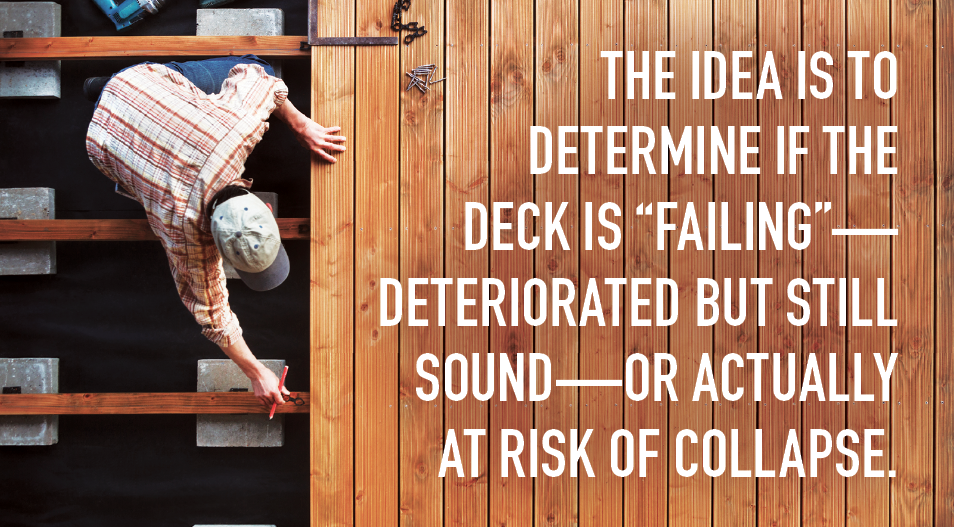 Miller says, having to do with “points of connection to the support posts or to the house.” That is, post-to-footing, post-to-band, and band-to-house. In addition, the inspection looks at stair and guardrail connections. The idea is to determine if the deck is “failing”—deteriorated but still sound—or actually at risk of collapse. That information, once determined, is augmented with “photos of decks in failure and decks in collapse,” Miller says. “We talk about the importance of understanding the nature of the current structure and why it should be replaced.”

Outback Decks isn’t opposed, on principle, to “salv-ag-ing” an older deck. But the company has developed systems that steer it away from situations where the deck builder would be liable. NADRA EVP Mike Beaudry estimates that about half of the 50 million decks in the U.S. are at least 20 years old. Reputable deck builders must have a method of assessing the usable life of a deck and a policy for determining when it’s safe to repair rather than replace.

When San Diego contractor Andrew York, owner of ProDeck Construction, gets a deck repair call, often enough it’s “20 years old and the wood is worn out,” he says. “It’s seen its life.” The frame condition, York says, will determine whether or not the deck can be salvaged. If the framing material isn’t pressure-treated and is unpainted, it’s usually a lost cause.

York says that on jobs where “the [client] just wants to do the decking instead of the entire frame, I explain that there’s five to 10 years of life in the frame, the new deck will cost X and last however long, and that they can replace the frame for X much more and it will last the life of the decking.” If the homeowner is looking to save money, York says, they will likely opt to just replace the decking. But, he adds, “I make sure it’s understood that we’re just doing the decking portion, so we’re not responsible if this deck fails. I make that clear in the scope of work.”

In York’s market, reframing involves a significant cost difference because parts of his service area are at high risk for fire. A standard deck plan must meet San Diego County fire code using heavy timber framing—bigger members are slower to ignite. For York, such situations are an opportunity to suggest steel framing, which about 10 percent of his replacement customers opt for.

About 25 percent of the calls Brown gets involve repair. “Our rule of thumb is, if the framing is sound but the decking is crappy—which happens a lot—we will do everything we can to reuse as much of it as possible.”

For Brown, 35 or 40 percent of re-decks are in pretty good shape. But if the homeowner wants a heavier deck board—a composite, say, which is typically double the weight of wood—or a decorative design, then the company may need to add more framing support. “If it’s a simple deck and they want to turn part of it into a porch, we have to add footings,” he says. “But if repairing the frame only saves a few grand, you might be better off replacing the whole deck.”

Miller says that, whereas Outback Deck began by marketing its willingness to engage in deck repair, today that’s harder to do. A typical call may be from someone planning to sell their house who simply wants the deck made presentable. It is, he says, almost its own business. “If you’re going to run deck repair and advertise, you can expect 75 calls a month and you have to have a process to send a guy out and sell that job and do that repair on the spot and move to the next one,” he says. The current Atlanta labor market makes that almost impossible: “Finding guys who can run deck repair isn’t easy.”