Check out these paint products, which make just putting color on the walls seem old fashioned The latest generation of interior paints focuses on indoor air quality. “We’re kind of entering a renaissance period for paints right now,” says Chris Connelly, director of brand management for Benjamin Moore. “The [paint industry] is doing one really good thing: It’s starting to put the end user at the center of its development instead of [introducing] technology for technology’s sake.”

How this New Paint Kills Bacteria

A new paint designed to kill bacteria in hospitals could find its way onto the interior walls of homes where germs are a concern.

In February, Sherwin-Williams launched Paint Shield (shown, below), the first paint registered with the Environmental Protection Agency for its ability to kill common bacteria on painted surfaces. The microbicidal paint reportedly kills greater than 99.99 percent of five harmful types of bacteria within two hours of exposure on a painted surface. The paint’s pathogen-fighting property lasts up to four years, according to Rick Watson, Sherwin-Williams’ director of product information. 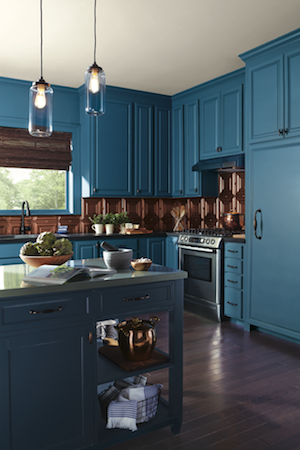 Among the bacteria that the paint kills is Staphylococcus aureus, the bug that causes most staph infections. In about a quarter of healthy adults, S. aureus is present in the nose and on the skin and doesn’t cause an infection or symptoms. But when staph-associated illness does occur, it can range from skin infections to conjunctivitis to food poisoning. If Staphylococcus bacteria manage to enter the bloodstream, joints, bones, or heart, the result can be serious or even deadly. The risk is higher for people with a depressed immune system, which is why Paint Shield is often used in hospitals.

The paint also kills methicillin-resistant Staphylococcus aureus, or MRSA. This antibiotic-resistant bacteria often causes skin infections and is very tough to treat. The pathogen can infect surgical wounds, the bloodstream, the lungs, and the urinary tract.

Although most MRSA infections are seen in medical settings, the bug has also caused problems in the general population. Known as community-associated MRSA, it generally begins as a painful boil and is spread by skin-to-skin contact. At-risk populations include athletes, child care workers, and people who live in crowded conditions.

Paint Shield is designed to kill three other bacteria as well. Escherichia coli (E. coli), which affects people who eat tainted food or drink tainted water and typically causes fever and diarrhea. VRE (vancomycin-resistant Enterococcus), which can infect the intestines, urinary tract, and open wounds. And Enterobacter aerogenes, which can cause serious infections of the skin, abdomen, eyes, and respiratory system.

Scientists from Sherwin-Williams collaborated with microbiologists to formulate Paint Shield. The paint contains bacteria-fighting microbicides, which are sometimes prescribed as medicine to prevent infections in high-risk patients. The effort was in response to requests from hospitals, schools, day care centers, hotels, cruise ships, and similar facilities for tools to prevent the spread of pathogens on surfaces, Watson says. Paint Shield comes in 550 colors and an eggshell finish. It can be applied to nonporous interior ceilings, walls, doors, and trim.

Homeowners sometimes shy away from mildew-resistant bathroom paint because of its glossy sheen. “The industry was forcing people into a finish they didn’t want,” says Benjamin Moore’s Connelly. “Designers want to achieve the true depth of a paint’s color. That comes with a flat finish.”

Benjamin Moore’s Aura Bath & Spa (shown, right) “tries to take that shackle away from people,” Connelly says. The interior water-based paint, formulated to resist mildew growth in humid rooms, is made without surfactants—the ingredients that help stabilize the product. Surfactants sometimes leach from the paint and can create spots and drips on the surface of the wall in a humid room. Aura Bath & Spa is a paint and primer in one, cleans up with soap and water, comes in all of the manufacturer’s colors, and offers a matte finish.

Not only does Sherwin-Williams’ zero-VOC Harmony interior latex paint contain no formaldehyde, it removes formaldehyde that other products, such as insulation, carpet, cabinets, and fabrics, have released into the home’s air, the company says. The GreenGuard-certified product is also designed to reduce pet, cooking, and cigarette odors.

A study by Sherwin-Williams and the UL-GreenGuard Institute demonstrates that the paint’s formaldehyde-reducing technology can decrease those airborne VOCs by up to 45 percent. And a separate odor-eliminating technology reduces pet and cooking odors. The paint also contains anti-microbial agents that inhibit odor from mold and mildew and combat their growth on the paint’s surface, the company says. Harmony paint doesn’t lose its abilities when color is added, Watson says, as long as the colorant is VOC-free. Harmony is available in flat, eggshell, and semi-gloss finishes.

Benjamin Moore’s Natura paint has been certified by the Asthma and Allergy Foundation of America as “asthma and allergy friendly.”

“It’s the company’s most environmentally friendly paint,” says Connelly, noting that it contains no VOCs and produces zero emissions. Even the painter will not be exposed to harsh fumes, and the company calls the paint “virtually odorless.” Natura has zero measurable emissions at the time it’s applied and zero emissions three days later. And the company achieved this without sacrificing quality, Connelly notes. “Historically, when you made a choice that you want a greener, safer paint, you made a compromise in durability and washability. If we were having this conversation in 2000, we would be talking about a reduction [of those things].”

Go With the Flow

As states tighten their limits on the VOC content in paint and more consumers insist on healthier products, manufacturers are reformulating entire lines.

For Rust-Oleum, known for its primers and protective coatings, the switch from solvent- to water-based ingredients meant finding alternatives for alcohol and shellac products that emit potent odors and are, in some cases, flammable.

In 2013, the manufacturer introduced the industry’s first synthetic shellac primer, Zinsser BIN Advanced, which it claims performs as well as the original product—without fumes or the danger of igniting.

Since then, the company has formulated a zero-VOC interior/exterior Bulls Eye Zero Primer, which is LEED compliant, and a low-VOC, soap-and-water-cleanable Zinsser Smart Prime primer.

Other manufacturers are following suit. Valspar, for instance, has reformulated its full lineup of paints to rid them of VOCs and to qualify them for GreenGuard Gold certification. Another example: PPG’s ultra-low-VOC Break-Through interior/exterior paint is formulated to bond to challenging surfaces such as doors, windows, trim, and cabinets.

Yet, while many painters rave about the more eco-friendly products, some still buy oil-based primers because of their familiar flow and leveling qualities.

Other professionals, once dissatisfiedwith latex paint whose drying timeand application “flow” were unlike oil versions, have gotten used to paintingwith low-VOC products. “They don’t paint the same as oil,” says Darylene Dennon, president of Solid Energy, a painting and carpentry firm in Woodinville, Wash. “But the ones they’ve got now are actually really darn close.” And Dennon’s customers expect the painters to use them. “The first thing [clients] ask is: What kind of paint do you use?” she says. —SOM

Sharon O’Malley has covered the home building and remodeling industries for 20 years. She is based in College Park, Md., where she is a member of the adjunct faculty at the University of Maryland’s Philip Merrill College of Journalism.