One veteran, one remodeler, one disaster Jack Baker, 69, lives in the Dallas suburb of Mesquite, and earlier this year was the victim of what area remodelers are calling the worst bathroom job they’ve ever seen. Considering that Baker is also a veteran, is disabled, and was recently diagnosed with lung cancer, it was an easy decision for the local chapter of the National Association of the Remodeling Industry to get involved.

A few months back, Baker received a $6,800 grant from the Department of Veterans Affairs for a new walk-in shower. He used the money to hire Mike Van Sickle—not a NARI member—who claimed to have done more than 100 similarly funded projects. 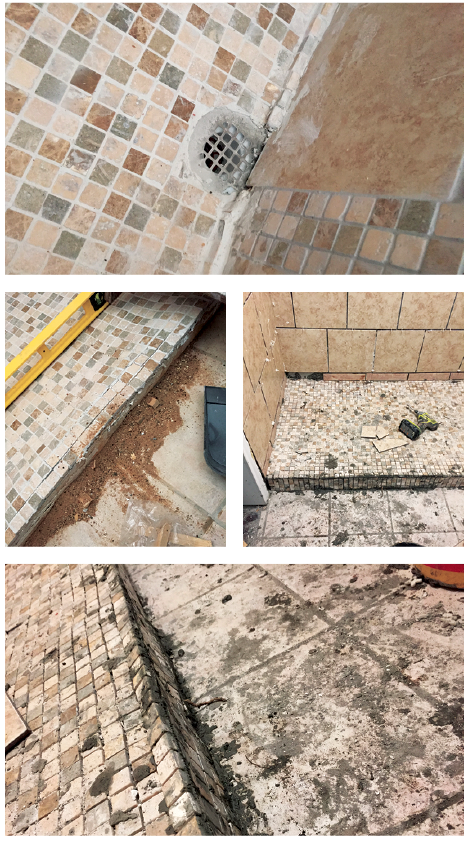 Over the next three weeks, Baker’s bathroom was torn apart by Van Sickle’s subcontractor. “I brought in a new guy and he didn’t do a job up to my standard,” Van Sickle says. Baker’s son, Joe, was more explicit, stating, “I’m pretty sure the guy had never done tile work before.”

An attempt to fix the project ended in similar dissatisfaction after about a week. Van Sickle says he offered to continue working on the shower, but Baker called in Chad Hatfield, president of Hatfield Builders & Remodelers, in Plano, Texas, to take a look.

“There was nothing right about this project,” Hatfield recalls. “Literally nothing.” The shower pan was improperly built and would never hold water, and the bench was fastened to the wall with dangerously inadequate anchors. “They used tiny little plastic slip-in anchors—not even drywall anchors,” Hatfield says. “Had Jack sat on that, he would’ve fallen.”

Moreover, the floor in Baker’s bathroom and bedroom were covered in thinset mortar. “We’re going to have to replace the bedroom floor because of it,” Hatfield says.

And finally, in what was perhaps the most puzzling act of negligence, the same thinset had also been poured down Baker’s toilet.

The nicest thing anyone could say is maybe this was an isolated incident. Professional Remodeler spoke with a handful of Van Sickle’s past veteran clients, and all had nothing but praise
for his business.

But this isn’t a story about a bathroom remodel gone wrong; it's about what happened later, when Hatfield contacted his local NARI chapter.

“This man was in desperate need of help, and quickly,” says Kim Savelsbergh, executive director of NARI Greater Dallas. Typically, in this type of situation, the protocol is to screen possible bene-ficiaries through one of NARI’s partner organizations. “We don’t generally deter-mine who’s qualified to get help and who isn’t,” Savelsbergh says. “That’s not our mission.”

But Baker’s situation was a special case. The association reached out to its members, and a number of local contractors donated their services. Not to be outdone, a handful of manufacturers, including Kohler, also stepped up with product donations. And when news of Baker’s story reached the City of Mesquite, the municipal government offered to waive the permit fees for the job.

“Unfortunately, disreputable contractors are a common occurrence,” says Savelsbergh, who adds that she gets weekly calls about remodelers who have done an inferior job. “It’s one of the many reasons homeowners should make sure they hire a NARI member for any remodeling project.”

Great story, guys! Way to do the right thing where it's needed most... shame on the VanSickle's of the world for neglecting their duties in making things right for their customers even if (supposedly) their 'subs' didn't!

Erika Taylor replies: Thanks for your comment! It's encouraging to hear stories of our industry stepping up to help others.