Pedal to the Metal

Homeowners are choosing longevity over price when they replace their roofs with steel, aluminum, or copper tiles and panels Since Paradigm Roofing opened, in McKinney, Texas, in 2004, demand for metal roofing from homeowners in Paradigm’s selling area has grown to the point where it accounts for 25% of the company’s residential replacements, which last year translated to 150 jobs.

The contractor, now with three locations, opened its own sheet metal fabrication shop in 2014 to keep pace with demand. It is also planning to expand its business into the Houston market, says owner and founder Tony Hall.

Metal continues to gain ground as a roofing material of choice. In a recent report, Gartner projected a 6.9% compound annual growth rate for metal roofing in North America from 2018 through 2025, the biggest percentage increase of any roofing material tracked. 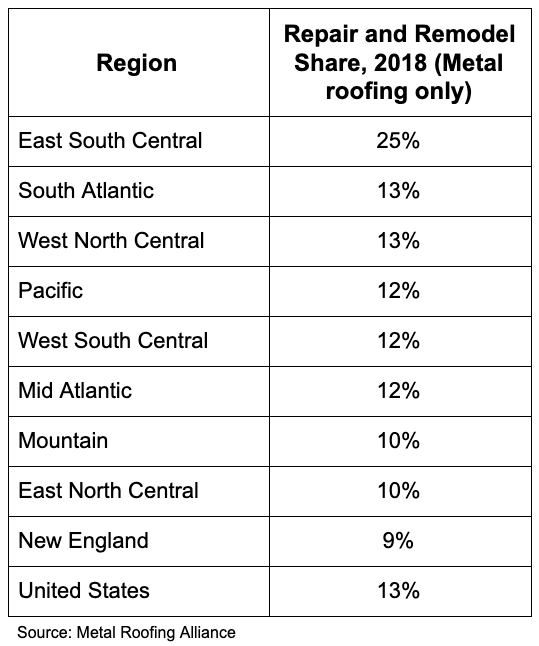 In 2018, metal roofing accounted for 13% of the repair/remodel roofing market in the U.S., up from 11% the previous year, according to a report that F.W. Dodge prepared for the Metal Roofing Alliance, a manufacturer trade group. “More people are thinking about it,” says Rip Hanks, president of Weather Shield Metal Roofing in Gulf Breeze, Fla., which has served the Florida Panhandle for eight years and does between 35 and 40 replacements a year.

There are several explanations for this demand. One is that extreme weather is hitting more regions of the country with greater fury. Miller notes that he’s gotten calls from owners in northern California who are rebuilding homes destroyed by fires last year and are looking for a “resilient solution.”

Steel roofs are favored in markets susceptible to hail storms, while aluminum prevails in coastal areas. Metal deflects the heat from sunlight, so it’s more energy efficient than asphalt. It’s available in different styles, including some that resemble asphalt shingles. And metal roofing is a good match for solar panels that can be attached with brackets that don’t require roof penetration.

Contractors and their suppliers also note that more homeowners have become frustrated with asphalt roofing whose longevity has been compromised over the years by manufacturers reducing their shingles’ petroleum content. Therefore, they say, owners find themselves replacing asphalt roofs every 12 to 15 years.

Metal Roofing Headquarters, in Birmingham, Ala., did 290 installations last year, 90% of them residential, that generated $7 million in revenue. Stefan Boyer, who cofounded the company in 2015 with brother Jonathan, sees nothing but runway in his company’s immediate future. “We’re getting more interest from higher-end customers; we have several bids out for roofs that will cost over $100,000.” He adds that architects are specifying metal more frequently, and HOAs are more accepting of metal in their repair and replacement covenants.

Depending on the market, metal roof installation can cost anywhere from three to five times a comparable asphalt roof replacement. The website HomeAdvisor.com estimates that materials and labor for a metal roof range from $190 to $1,400 per square foot, versus $120 to $335 per square foot for asphalt. HomeAdvisor estimates that a replacement metal roof on a 1,000-square-foot home would cost between $4,600 and $16,000; for a 3,000-square-foot home between $13,000 and $45,000.

To minimize this cost disparity with asphalt, contractors position metal roofs as “permanent,” with a lifespan of at least 50 years. They also assert that metal roofing isn’t a depreciating asset, and that owners can recoup anywhere from 50% to 90% of the roof’s cost at resale.

That being said, the target market for metal roofs is limited. For example, in 2018 Legacy received 345 leads, did 283 product demos, and completed 65 metal roof replacements that generated $1.6 million in revenue. Moeslein says Legacy is on track to do 100 projects and $2 million this year.

“Our typical customer is over 50, and is moving into his or her ‘last house’ for retirement,” says Frank Farmer, president of American Metal Roofs of Michigan. Flint-based American, which Farmer started in 2000, does between 250 to 300 installs annually. He expects sales this year to land between $7.5 million and $8 million, which would represent a 10% to 15% increase over 2018.

Farmer calls American “a marketing company that sells metal roofing.” He spends $1 million annually to drive prospects to the company’s website, where they can download information about the product and installation.

The Internet generates about two-thirds of the 7,000 inquiries American typically gets annually. Of that total, many people simply don’t qualify financially. Farmer says his salespeople weed out another 10% to 12% because their houses aren’t suitable for metal roofing, either because their pitch is too steep, their ventilation is inadequate, or they require mold remediation. American does 1,500 appointments a year, where further winnowing occurs before it takes on an installation.

“Right now, we have a 10-week backlog; that’s not healthy,” says Moeslein of Legacy Remodeling. He could easily expand his business by hiring a second salesperson and doing more Internet marketing. But, he says, “we can’t move the work fast enough” because of labor availability. “It’s a Catch-22.”

“We can’t even find people to train,” says Miller of Isaiah Industries. A decade ago, his company’s monthly free training classes for its contractor network attracted 15 people per class. Now, the classes are every six weeks, and four to five people enroll. Miller thinks metal roofing’s future could hinge on the development of products whose installation can be automated.

Farmer, who is 61, says he’s avoided the labor dilemma by structuring his company to appeal to Millennial workers “who want to be appreciated, and are extremely productive when they have independence.” His company is “heavily into mentoring” and incentivizes its crews with merit raises. Farmer’s employees also own 30% of the business, “and will own it all when I decide to retire.”

As a roofing contractor in Wesley Chapel, Florida, we are getting more and more requests for metal roofing.
Appreciate the insight of this article.