Recent changes to the AWPA’s U1 Standard for use categories UC3B and UC4A require lumber rated for ground contact to be used for some above-ground components, such as ledgers, beams, and joists, “when they are difficult to maintain, repair, or replace, and are critical to the performance and safety” of the structure, the document states. Photo: Dan Morrison

In the fall of 2015, the American Wood Protection Association (AWPA) passed a proposal to revise its U1 Standard, which describes use cases for pressure treated lumber at different levels of “retention” (a term used to describe the concentration of chemical preservative used to treat the wood). Most builders and remodelers use pressure treated lumber to build exterior decks, and the AWPA standard effectively matches retention to where in the structure the wood is used. Currently, lumber rated for ground contact is typically used for posts and grade beams, while lumber rated for above-ground use is used in the rest of the structure.

Under the revised standard, however, ground contact lumber may be needed for some components located above ground. And not just a little bit above ground. While the proposed revisions mention lumber “installed less than six inches above ground (final grade after landscaping) and supported on permeable building materials (e.g., treated wood or concrete),” they also address components that are “used above ground but are difficult to maintain, repair or replace and are critical to the performance and safety of the entire system/construction.” Depending on how that language is interpreted once the new standards are adopted (see “AWPA U1 Standard Revisions” sidebar, below), deck ledgers, some beams, and possibly even joists, railing posts, and railings may all need to be built using treated lumber rated for ground contact.

The changes are scheduled to become effective with the next update of AWPA’s U1 standard, which is expected by early summer of 2016. Local enforcement, however, will depend on adoption by the International Residential Code (IRC) and International Building Code (IBC), and by state, local, and municipal building authorities.

Want More? Check out how to install stucco above a deck ledger.

Reasons for the Change 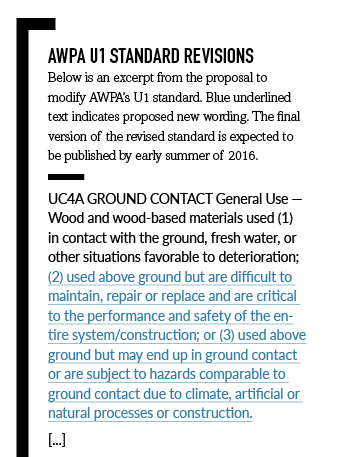 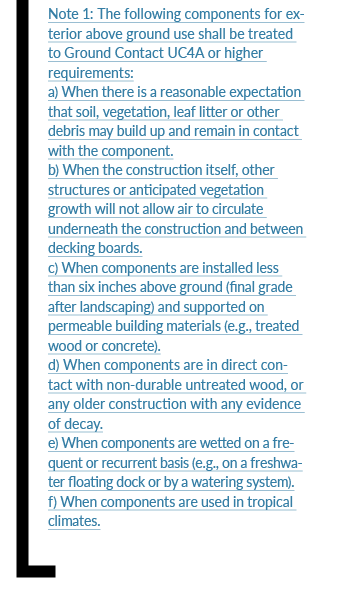 Using ground contact pressure treated lumber above ground is nothing new. Before 2003, when manufacturers voluntarily stopped treating lumber intended for most residential uses with copper chromium arsenate, CCA-treated lumber was widely available in a single formulation that was rated for ground contact use. The current revisions are another chapter in the decade-long struggle to find suitable substitutes for CCA, which include ACQ (alkaline copper quaternary), CA (copper azole), and µCA (micronized copper azole), among others.

The transition to non-CCA substitutes got off to a rough start more than a decade ago when several of the new compounds were found to be significantly more corrosive to metal connectors and fasteners than CCA had been. Since then, upgraded coatings on connectors and fasteners, in combination with new formulations of non-CCA compounds, has reduced the corrosion problem while providing the treated lumber with good protection against decay and insect infestation.

But some failures continue to be reported, typically around poorly flashed ledger boards, where water collects on wide deck boards, and in the seams between built-up beams. This is partly due to the effects on retention of factors such as lumber species, presence of less-absorptive heartwood, and the shape and volume of the lumber stock itself. Failures also occur when conditions around decks change, as when leaves or other organic matter accumulate on top of or against treated lumber components or when frost action or subsidence causes lumber that was originally close to the ground to come into contact with the soil.

The revised standard will likely be included in the 2018 IRC and IBC, but local inspectors who are aware of the changes may recommend early compliance. And depending on where remodelers buy their lumber, they may be affected much sooner. T.W. Perry, which operates five lumberyards catering to remodelers in the Washington, D.C., metro area, has already begun to convert its pressure treated inventory to 100 percent ground contact lumber. “We listened to our customers,” says Chris Purdy, a purchasing agent working out of the Gaithersburg, Md., branch. “They didn’t want to know who made it or what was in it, they just wanted to know they were protected.” Availability won’t be a problem because T.W. Perry’s supplier, Madison Wood, is also completely switching to ground contact treating only. And the price difference is small: On T.W. Perry’s website, a ground contact 2x10-12 costs 52 cents more than one rated for above-ground use. “That’s a small price to pay for peace of mind,” Purdy says.

Treatment levels will remain the same (see “Wood Preservative Retention Levels,” page 56), but changing use conditions mean that ground contact lumber may now be needed for components that used to be built with above-ground–rated lumber. Because ground contact lumber has about twice the concentration of preservative as above-ground lumber, it’s reasonable to ask whether corrosion of connectors and fasteners will once again be a concern.

Connectors. The steel in most commonly used connectors is galvanized in a “continuous hot-dip galvanizing” (CHDP) process, in which zinc coating material is deposited on a continuous steel sheet as it’s pulled from a coil at various speeds. The speed determines coating thickness, which is specified in ASTM A-653. The coated steel is then fabricated into joist hangers and other common thin-gauge connectors.

Post bases and some heavier gauge connectors that cannot be fabricated entirely from sheet steel are dipped into molten zinc in a process called “batch hot-dip galvanizing.” Because these connectors are exposed to the zinc for a longer time, the coating is generally thicker than that on coil steel.

Fasteners. Rather than use different fasteners for different grades of lumber, most remodelers use the same fasteners for both. “The important thing,” says Joe Loferski, a professor in the Department of Sustainable Biomaterials at Virginia Tech, “is that the fasteners must be hot-dipped galvanized or stainless.” Most fasteners are manufactured from wire coil galvanized in the CHDP process following standards set by ASTM A-153, which specifies the required thickness of the zinc coating for various uses. “When in doubt, look for products that have been approved by the ICC Evaluation Service [ICC-ES],” Loferski says. “Each one should have an Evaluation Service Report [ESR] that will tell you where it can be used.”

Thicker is better. The steel connector industry has done independent testing on many non-CCA treating compounds and found them to be more corrosive than CCA. Consequently, manufacturers have raised their standards for coating thickness. The zinc coating is measured in ounces per square foot, counting the total weight on both sides of a continuously galvanized sheet. The old standard for use with untreated lumber was G-60, which means the zinc coating was applied at the rate of 0.60 ounces per square foot (oz/ft2). For CCA-treated lumber, the standard was raised to G-90, and after corrosion problems surfaced with early versions of ACQ and CA, it was raised to G-185. “That won’t change,” says Todd Grevious, engineering manager for USP Structural Connectors, a division of Mitek Builder Products. “The tests we did showed that the new formulations were less corrosive, but not enough to say it was OK to use G-90.”

For connectors and fasteners used with ground contact treated lumber, USP recommends a minimum of G-185, which is available in its TZ (for “triple zinc”) coated hardware. For extra protection, USP offers Gold Coat. “It’s G-90 material plus a polymer coating, which keeps the reaction from starting,” Grevious says. “It’s more expensive than a TZ coating, but it performs nearly as well as stainless steel, which is five times the cost.” 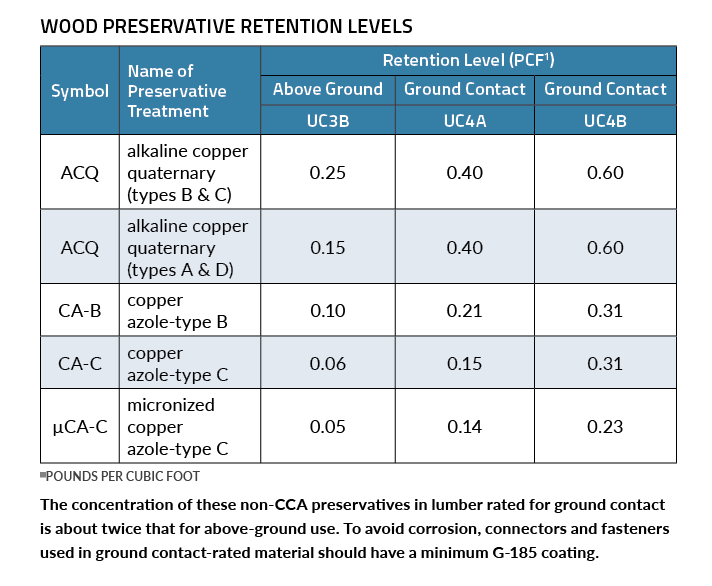 I want to build a box for above my septic tank and and access hole for purposes of Maintenance (every 10 years) cleaning. I want to use PT ground contact plywood and 2 x 4s. Box would be 2ft x 2 ft by 4' tall. Ground seemed pretty dry when I dug it up. Do I need to find below ground pt plywood, have trouble finding, or can I use ground contact pt wood?

I want to build a PT Wood Retaining Wall within 45 feet of my well. Should I be worried about chemical leaching into the ground and eventually, into my well water?

I'm having a deck built. The builder is using ground contact boards. The wood has green stains here and there. Will this green stain/paint go away?