The No. 1 most popular bathroom design feature is large walk-in showers, according to the Q4 2017 Design Trends Survey (DTS) from the American Institute of Architects. The feature displaces doorless showers, which held the top spot in Q4 2016, as well as the No. 2 and 3 features, adaptability/universal design and a stall shower without a tub, respectively. 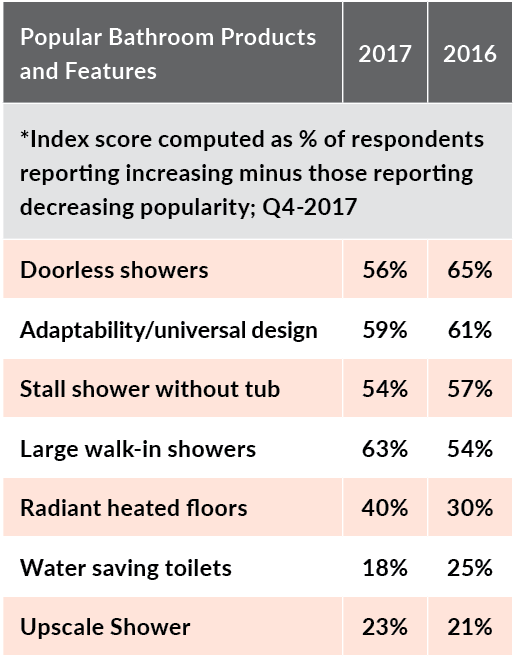 Drawing from a panel of more than 500 architecture firms operating in the residential sector, this most recent DTS detailed a growing demand—which has been building for some time—for specific kitchen and bathroom design features. These include large walk-in showers and radiant heated floors, which saw a 10-percentage-point boost in popularity, with 40 percent of respondents reporting a growing demand in last year’s final quarter compared to 2016’s.

On the kitchen side, the top features pretty much carried over from Q4 2016: outdoor kitchens, more open floor plans, butler’s pantries, etc. However, there is movement in the lower ranks. Now in the No. 7 spot for most popular kitchen design feature is smart/connected kitchens—which didn’t even make the list in Q4 2016. The feature snagged the ranking from adaptability/universal design, which dropped 9 percentage points year-over-year. Despite the dip, AIA chief economist Kermit Baker said in a statement that universal design is still a priority for homeowners.

“Demand has remained solid for smart home features in the kitchen, which isn’t surprising as more new systems and products are being introduced at a dizzying pace,” he said. “At the same time, ensuring accessibility throughout these areas and promoting convenience remain priorities for homeowners.”

The best news for remodelers is that alongside these shifting design and product trends, respondents reported a surge in remodeling activity—further affirmation of what other reports have already indicated. Fifty-seven percent of respondents reported increased K&B remodeling activity in Q4 2017, compared to only 51 percent in Q4 2016; and 61 percent reported increased demand for additions/alterations, compared to 54 percent one year prior.