In a nutshell: The home’s kitchen, breakfast area, and family room were on three levels, separated by two steps from level to level. For the homeowners, who enjoy cooking together and with friends, these separated spaces weren’t conducive to such gatherings. The clients sought to integrate the kitchen and family room into one large entertaining area, replace failing appliances and worn cabinets, improve storage and lighting, and add special touches for a dramatic “wow” factor.

Solutions: Rather than disturb a concrete footing under the raised breakfast area, the Harrell Remodeling team chose to raise the kitchen floor height to match it. They added 2x12 joists at 16-inch centers topped with ¾-inch plywood, then finished with porcelain tile. Raising the kitchen floor to the breakfast area height created a better connection between the kitchen and family room, leaving just two stairs between the two levels instead of four. 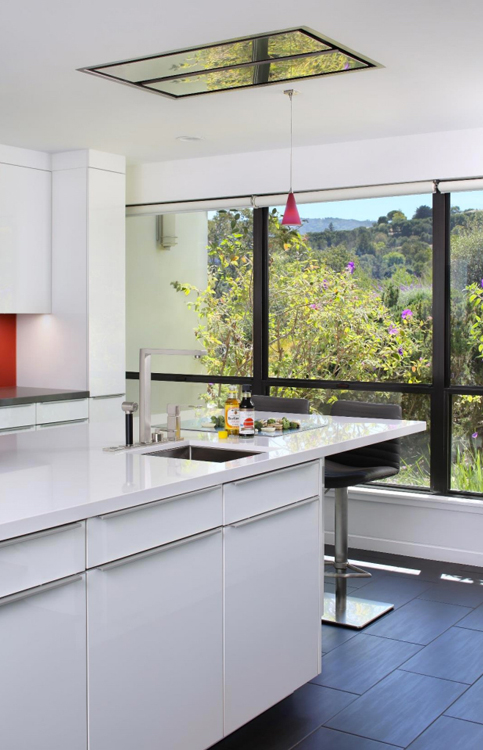 For the “wow” factor, Harrell replaced aging appliances with an integrated refrigerator and dishwasher, six “ovens” (two conventional, two warming drawers, a steam oven, and a speed oven), a high-Btu rangetop and grill, and a flush-ceiling-mount exhaust hood. Recessed lights, as well as decorative LED and under-cabinet lighting were also added.

Countertops feature easy-to-clean Caesarstone and Silestone, and two sinks: a main and a prep sink. A back-painted red SodaGlass backsplash injects a pop of color.

The finishing touch is a set of glass drawers at one end of the island. The countertop is supported by an interior pony wall and a 2x6 cantilevered framework that is glued and screwed to a single 10-foot-long sheet of ¾-inch plywood spanning the full length of the island. The assembly supported 250 pounds with no flex, but the crew added a narrow bracket between drawers for extra support.