A Lesson in Universal Design: How to Make Stairs Safer for All

For safety around the house, it’s the little things that count One of the most dangerous stairs people encounter each day are the ones leading into the house from the garage. Often these are cheap, prebuilt MDF stairs that are narrow, steep, and a hazard to everyone: toddler, teenager, adult, and senior alike.

Such was the case with the stairs in the 1980s suburban Denver home of Don and Ricki Safer. Ricki took a tumble down them about three months ago; she’s been on crutches ever since and is now facing possible surgery. Her “good” knee is swollen from overuse since she hasn’t been able to bear weight on the injured leg.

The Safers, a fit 70-something couple, have lived in the house for 37 years and never given that stair a second thought. But after the fall, Ricki admitted “the stairs terrified me; I never realized how steep and dangerous they were.”

With just two 9-inch treads and three 8¼-inch risers, they’re plenty steep, a condition all too common in a world where builders pride themselves on how little space they can eat up with stairs. I’ve had more than one project where the carpenters told me, “I can save you a whole tread.” My answer is always an emphatic “No!” Saving space isn’t the goal; saving lives is.

The International Residential Code 2009 allows up to a 7¾-inch rise and a minimum 10-inch run, with the stipulation that all risers and treads be within ⅜ inch of each other. Not too long ago, code allowed up to an 8¾-inch rise, which requires you to be an Olympic-class athlete to climb the stairs. In my opinion, a 7-inch rise in all stairs (the International Building Code 2009 maximum) would allow people to age in place for years.

Similarly, a 10-inch tread is too short. Big shoes like mine hang over 3 inches on that size tread, and so you get used to walking down with your feet angled to catch more surface. I am a proponent of the IBC 2009 minimum 11-inch tread.

Don Safer is a friend, not a client, and when he told me about Ricki’s fall, I asked him to send me a snapshot of the stairs. That night I sketched an alternative stair and gave him the name of a great remodeler friend, Dave Matthews, of Churchill Construction. Dave promptly had the old stair torn out and a new one built, with three 10¼-inch treads and four 6⅛-inch risers, a far more comfortable stair [2a, below]. 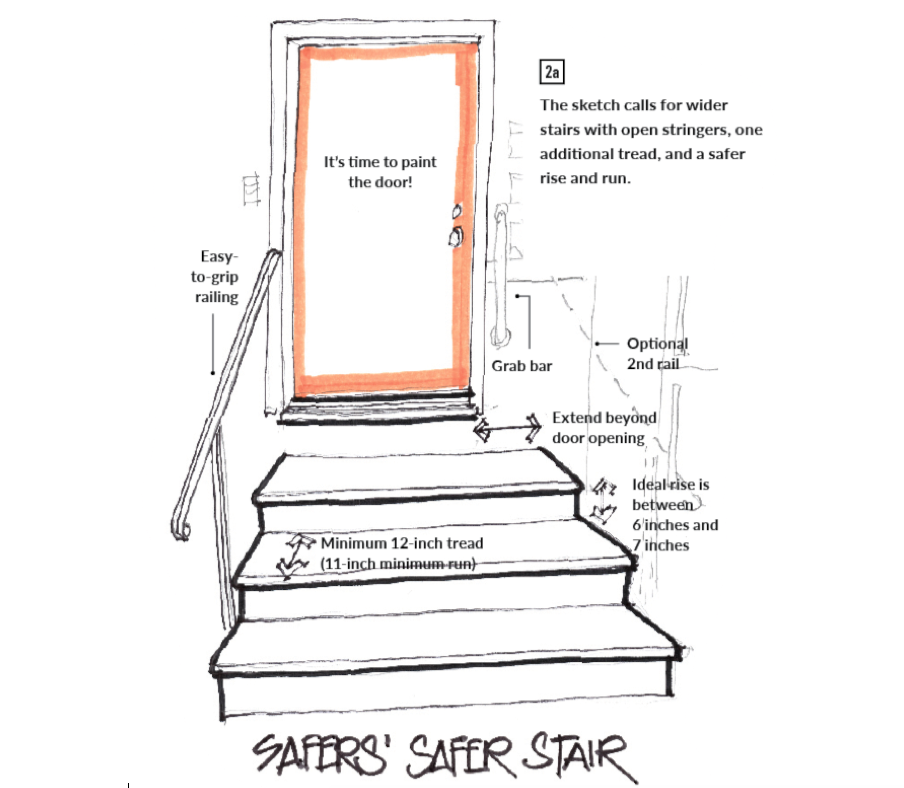 The old railings were 2-by’s on edge and hard to grip. The new railings use a 2x6 for strength with a grip rail mounted on top. Don says he now uses the railings going up and coming down, even if it’s only to lightly graze his hand on them. 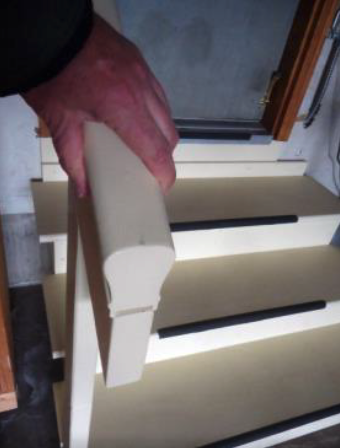 Remodeler Dave Matthews mounted an easy-to-grasp grip rail on top of the 2x6 handrails, added sand to the tread paint to improve traction, and applied contrasting nonslip tape to the nosings to help with visibility.

I also suggested extending the width of the stairs on the latch side to recognize the space needed to set down a package while fumbling for keys. A wider stair is also easier to get to from the sides, where a closed stringer is a potential trip hazard. My sketch didn’t call for balusters because you don’t need them until the total rise is 30 inches or more.

I did a similar retrofit upon buying my current home, which was built in 1983. The 6½-inch rise was great, but the treads measured just 9⅜ inches and matched the 32 inch width of the door. I didn’t add another tread, but I had the stairs built wider, extending 5 inches to either side of the door, and with deeper 11¼-inch treads for safety. 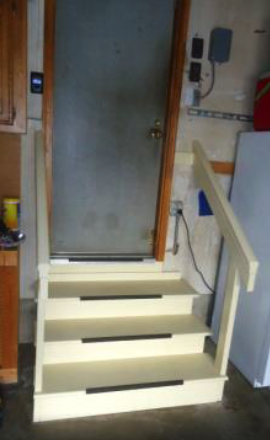 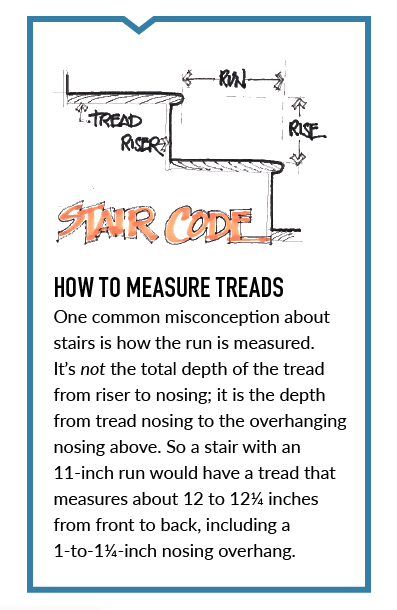 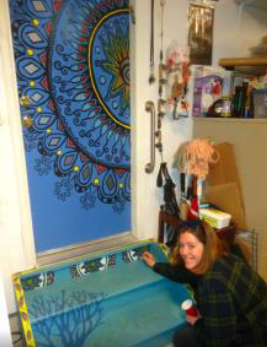 As an unexpected housewarming present, my artist daughter, Allison, decided to paint our plain old door and new stair. It is now one of a kind in the neighborhood for both looks and safety. For these, we didn’t add a railing, but we did mount a vertical grab bar, which helps older visitors to get up the stairs. Someday soon, as we near our 70s, we’ll add a handrail.

Only a handrail that meets code is going to provide a secure place to grip while going up or down stairs. The lack of a hand rail on the right side going up is a foolish economy. People have a dominant and stronger hand and as most are right handed they will use that hand to grab hold of the railing. In the example shown a person would have to rely on the hand railing on the left and use their left hand going up the stairs.

Another common flaw is the lack of a landing so people have to step out from the room and onto the first tread which is fine if someone is fit and agile but a problem for the elderly or infirm.

Provision should also be made to allow sufficient space to later add a ramp with handrails over the stairs should one of the occupants become disabled, even if it is for a period of only a few months, as when someone has had a hip or knee replacement.

Bruce, I couldn't agree more that two handrails are better than one.  In my sketch I suggested they leave one side open with a grab bar, so that someone coming from that direction quickly wouldn't have a railing in the way if they were approaching at an angle.  The owners wisely chose the optional second handrail instead.

My mother, now 93, was in a two story with very steep stairs, and we asked her, "do you always hold onto the railings when you come down?" To which she replied "Yes, except when I'm carrying something."  We moved her into a one story condo within a month!

I also agree in an ideal world that there would be a landing on both sides of any door, but standard garage depths prevent stairs plus a 3 foot landing without giving up a parking spot.  If and when a homeowner needs a ramp, the parking spot is easily sacrificed for the mobility that a ramp can provide over a stair, and I have built them over existing stairs, so that the next owner can take out the ramp and return it to its original configuration.

There is ADA, there is Universal Design, and then there are customized solutions for the individual, and that is where I go with my clients.  A good example: ADA requires two horizontal grab bars in a tub, one down low, and one at standing shower height.  Most residential clients have found that redundant and institutional looking, and I tend to agree. What most choose is one grab bar, sloped from low at the back of the tub for the bather, to high at the front for the standing shower. The advantage of this is not only one less grab bar, but it's at an angle that falls more readily to hand than a vertical one, for which you need to cock your wrist.

You can present all the options to your clients, but ultimately it is their decision.  I've been working with this one client for 3 months, and construction starts Monday, and only today over coffee did I convince him to add two grab bars and a flip down seat to his shower!

I appreciate the shorter, wider steps but, as we get older -- with possibly limited vision and strength -- the overhanging nose on the stair can become a hazard for tripping.

Interior wood stairs
my rise is 8-1/4 and run is 10" and every now and then someone slips, seems like the run is too short.
Can I put deeper replacement stair treads on to make it safer?

Rick: Unfortunately you cannot just add deeper treads; it would create a real tripping hazard. But those stairs have two strikes; a rise that is a full 1/2" taller than allowed by code and a short run. They need to be rebuilt, and one more rise and run added. Don't know how much room you have at top or bottom, but the ideal stair would be less than 7 to 7 1/2" rise, and an 11" run (which means a 12" tread with a 1" nosing). See how close you can get to that!

I had an existing basement stair last year in a 1906 home that was confined at top an bottom, and only had about a 9.5" tread. We rebuilt it in place, using the same stringers, and added 1/2" to each tread, but in doing so, we added increasing amounts to the existing stringers, none at top riser, 1/2" to 2nd, 1" to 3rd, and so on, to keep the correct rise, run, and nosing. The extra 1/2" that gave us a 10 " tread was very noticeable and appreciated.

I have three family members who are not wheelchair-bound, but have great difficulty with even a 7-1/2 inch rise - and one has a 15" foot. All of them wanted stairs versus a ramp. When I contracted for a new front porch to be built, I designed stairs with the minimum 4-1/2" rise (for our area), made the runs 18" deep, and made a landing after every 3 steps. I cornered the stairs once and put handrails are on both sides. Now, all my family members can easily negotiate the stairs into the house and many people have commented on how well configured the stairs are for limited ability persons.

Sandy: what a great solution you came up with for your family. That is about the most gentle set of stairs imaginable, and hopefully they can use those stairs the rest of their lives. You did a wonderful job tailoring the solution to the user. Congrats.