The Good Fight: How I Defended My Reputation

A personal account from Washington, D.C., remodeler Christopher Dietz on how he fought the accusations of a client Christopher Dietz, of Dietz Development, with Sara Kropf, the lawyer who represented him in the lawsuit.

In 2012, Dietz Development, a Washington, D.C., remodeler, filed suit against a former client. The case was over negative reviews posted by the client online. Although both parties were found guilty of defamation, no damages were awarded. In our February issue, we looked at the case from a legal perspective. Here, Christopher Dietz, owner of Dietz Development, tells the story in his own words.

When my former client, Jane Perez, called me a criminal and a trespasser, I knew I had to take action.

The accusations that were made against me were false, but how could anyone else know that? After reading what she wrote, I wouldn’t have hired me. As a potential client, I would have been like, “Dietz might be fine, but I have two other qualified contractors. I looked at their references, and why should I risk myself or my house with this contractor when two others are capable of doing the job?”

Why I Filed the Suit

At first I wasn’t going to go the legal route. My goal was to work with Yelp and Angie’s list in having the reviews taken down, but they would not assist me. Both sites refused to remove the accusations because, legally, they are only hosting a third party’s comments, not publishing the reviews themselves.

The Communications Decency Act of 1996 says that “No provider or user of an interactive computer service shall be treated as the publisher or speaker of any information provided by another content provider.” In other words, they’re not responsible for what the reviewers say.

I sent them a letter from the attorney general stating that I had no criminal record. I also sent them the police report, showing that there were no charges against me, I was not a suspect for any crime, and the case was closed due to finding no evidence for a crime being committed.

When I sent that, they essentially said: Because this was a client of yours, we aren’t going to take action. The only way we will remove the reviews is if we’re told to do so by a judge, or if the poster herself takes them down.

So I had little choice but to file a lawsuit. I didn’t want to go that route. It was lengthy and expensive. But I wasn’t going to allow those statements about me to survive on the Internet.

Some people perceive it as an attack on the First Amendment, but defamation is not covered under freedom of speech. And this was declared defamatory.

The day we went to court, I had no idea this would be a crazy case. The whole thing was on the front page of The Washington Post, which is why I think everyone picked up on it, and it was nuts. The news arrived and had cameras in the courtroom, and there were a lot of people outside. 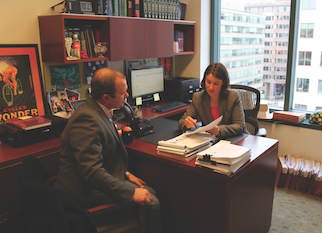 Even today, when you Google “Dietz Development,” I think the first search result is Angie’s List, second is a media report, and third is pictures of me giving interviews to media. I met a designer from California at the International Builders’ Show and gave her my card. Afterward, she texted me, “Hey, can you tell me about your lawsuit?”

And she said: “Well, I listened to your podcast yesterday about the lawsuit.”

And I was like, holy smokes … somebody who’s not even interested in giving me business looked me up and saw this information.

I was there during jury selection and helped my attorney research the jurors. There isn’t much you can do, just look online to see if they might have any conflict of interest. I think we selected a pretty good jury. It was a mix of men and women, mostly professionals.

But they ended up not helping us out. They had been told by the judge, or by the bailiff, that it was probably going to be a two-day case, but it ended up lasting five days, and that jury wasn’t happy with anybody by the fifth day. They got the case at around noon on Friday and came back with a verdict at around 7 p.m. the same day. Basically, they told the bailiff that they were tired and wanted to go home. They didn’t want to be sequestered for the weekend. The verdict was right down the middle: “You’re guilty, you’re guilty, go home, see you later.”

There were no damages.

I didn’t understand it initially. I was fine that they found me guilty of defamation, I mean I said the thing, I can’t argue with that. But I was shocked that there weren’t any damages. We had a potential client of mine who testified that she did not hire me largely because of those reviews. And I had vendors and other clients state that I was a good contractor and that they’ve never had anything missing from their jobsites or their homes.

But what was really surprising was that after the verdict was read, the judge gave his own dictum, which is a judge’s opinion. He basically tore into the defendant.

The judge said that the jury got it wrong, and had it been a bench trial, it likely would have had a different verdict. There probably would have been damages awarded. And then he shamed the other side’s attorneys, saying that although they got away this time, a day would come when they wouldn’t be able to pass off defamatory remarks as freedom of speech. He was stern but professional. That judge gave me goose bumps and made me start tearing up because he got it. He understood that I was wronged.

Based on my experience, I have three pieces of advice for remodelers.

1) Don’t spend money with Yelp or Angie’s List. It’s not worth your time, and you’re basically being extorted. Houzz is a good site for contractors, Porch maybe, but not Yelp.

2) Be proactive in getting reviews from your clients. I never asked for reviews, and so I never had any. Jane Perez created my profile on Yelp and Angie’s List. Before that, my business didn’t even appear on them. So, as a remodeler, you need to claim your own presence online. Claim your Google address and Houzz identity. Stay on Angie’s List or Yelp, but don’t pay them. Claim your presence, claim your name, claim your hashtag. Otherwise, someone else out there can claim it instead and start slamming you.

3) Always fight the good fight. I went through an expensive adventure, but I have no regrets. I would do it again in a heartbeat.

There needs to be a national dialogue with remodelers, home builders, trades—the whole construction industry. We need to team up and take this battle to the U.S. Capitol. We need to make it clear that we’re not going to tolerate trolls or clients who say, “I’m not going to pay this last payment, and I’m going to slam you online. Either I’ll take the review down and I won’t pay, or I’ll leave it up there forever.”

This has to change.

I think that’s the biggest issue. The law must be changed so that we have the ability to protect ourselves. We shouldn’t have to go down this expensive road of lawsuits. We should have some other recourse. PR

Professional Remodeler also looked at the case from a legal perspective. Read that article here.