Companies that have rolled the dice on installers seeking sales positions find it can pay-off big time, if managers know what to do At 43, Jody Keefer, who’d been banging shingles on roofs since age 16, began to have some ideas about a career change. Two things prompted that. One was that Keefer, an installer at Brothers Services, a Baltimore roofing, siding, and window company, had been talking to some of the sales guys whose jobs he installed. He already had a pretty good idea what they earned, which is considerably more than an installer. The reps told Keefer that he would make a good salesperson, and encouraged him to apply.

“I kept saying no,” says his boss, Dave MacLean, Brothers’ vice president of sales. “I’d say, ‘We’re a little light on leads right now,’ or ‘Maybe we’ll talk about it.’ I was taking the Don Draper approach. I wanted him to want it more.”

Keefer’s year-long perseverance paid off with a job as a roofing salesperson. He sold a $36,000 roofing project on his first appointment. After his second full year, he was named Salesperson of the Year by educational and consulting group Certified Contractors Network (CCN), which Brothers belongs to.

Home improvement companies with sales openings seldom look within, especially at their production staff. They’re more likely, says Jim Lett, owner of A.B.E. Doors & Windows, in Allentown, Pa., to seek a “professional closer,” someone who can learn the product one week and run appointments the next. And while Lett says that he would certainly be open to hiring that type of individual, at the moment, all four A.B.E. salespeople are former installers, and all have taken a Dale Carnegie course in selling. “I don’t mind bringing in someone from the field,” Lett says. “As long as they have selling skills or are coachable.”

But rarely do they have selling skills, and often they’re not perceived as coachable. More typically, someone in production indicates interest in a sales position, and sales management balks. The reason for that is because those two types of jobs, sales and production, often draw different personality types. Installers, says Tom Capizzi, owner of Capizzi Home Improvement, in Cotuit, Mass., typically “are not extraverts to begin with. They get a job done, and they go. They see selling as a complicated process.” That said, Capizzi notes that some of the best salespeople in his company’s history came from the field, one as a carpenter, the other a siding installer. Both became million dollar-plus salespeople.

What motivates salespeople to want to make that change, Capizzi observes, is money. The fact that he could double his salary had Keefer, a single father of three, thinking about a sales job. But there was also his future to consider.

“I’d been banging shingles my whole life,” he says. “I didn’t know if I could do anything else.” As he approached middle age, he figured he should be looking.

Moving someone from production to sales is extremely risky, Capizzi says. To make it happen, he says, means creating a “bridge to the other side.”

“The owner should meet with him three times a week, always at the same time,” Capizzi suggests. “Don’t just let them go. You’ve got to be committed to their success,” which means investing time in training, coaching, ride-alongs, and lots of one-on-one time. With no experience in sales but plenty of motivation, Keefer went out on his first lead after a week’s training. Brothers Services eventually sent him to a Sales Boot Camp offered by CCN, a five-day course that teaches a low-pressure, consultative, two-step sales system. In addition, MacLean says, “I ran leads with him every day.”

What made MacLean more receptive than many home improvement sales managers to Keefer’s switch from installation to sales was the fact that he himself started out in production. On rain days, he says, he’d come into the office and watch the sales guys put together pricing and proposals so he could see how it was done.

With their knowledge of product and how the house works, what installers can bring to a sales position
is credibility. ... And credibility brings with it higher close rates and project prices.

Moving into sales from production, he points out, requires not just motivation, but the ability to communicate—and to do it well—and to think on your feet. To control a sales presentation, he says, “you have to feel comfortable talking to people, and you have to be comfortable in your own skin. You have to have a little bit of the chameleon in you.” That is, the ability to take on the emotional color of the homeowner.

Finding that installer who can sell requires being open to the idea in the first place, and then letting everyone in the company know when a sales position is available. Phil Callen, vice-president of Callen Construction, in Muskego, Wis., says that openings, including any in the sales department, are posted within the company. A few years back a carpenter’s helper came forward to apply for a sales job. The candidate took a personality profiling (DISC) test—which measures assertiveness—and a sales aptitude test and was hired. “He did well for us,” Callen says, “well” as in generating more than a million dollars in sales. In his fourth month, the installer-turned-salesperson was closing at 51 percent on issued appointments. Eventually, after several productive years at Callen, he left for another sales position. 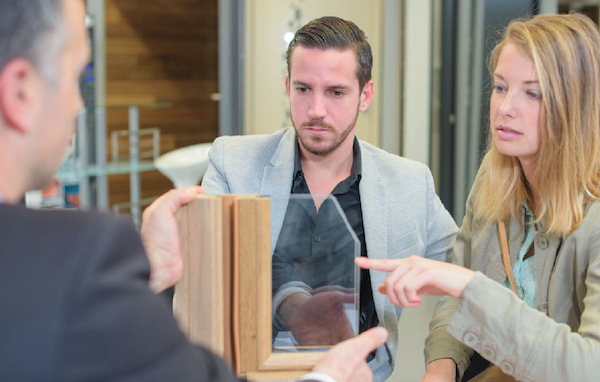 Though many owners began as installers who had no choice but to learn to sell their own work, companies such as Brothers, Capizzi, Callen, and A.B.E. are the exception not the rule. Habit, preconception, and convenience tend to be operant when it comes time to make a sales hire. “I don’t think [salespeople and installers] are two different species,” MacLean says. “The reason people get caught up in that paradigm is that most people only see what’s in front of them.”

With their knowledge of product and how the house works, what installers can bring to a sales position is credibility. And because they know what works and what doesn’t, Lett says, they don’t over- or under-sell a job. A.B.E. Doors & Windows’ salespeople, for instance, both sell and measure. The professional sales guy, Lett says, “may know how to sell, but someone has to come behind him to finish up the order.”

The biggest challenge for the installer-turned-salesperson, MacLean says, is pricing. What they know can actually make them feel timid when it comes to asking the company’s price for a replacement project. “Developing a thick skin and taking all those no’s, not being afraid of price, that’s the biggest hurdle,” he says. “I have three or four guys who used to be installers and I tell them upfront: ‘I am going to ride you nonstop about how much things cost.’ These are guys who always did every home improvement themselves.” He points out, “If homeowners had any idea how to do it themselves, they wouldn’t be calling us.”

Once the installer-turned-sales-rep gets past that—something sales training will enable him to do—he can use his considerable knowledge to advantage. Credibility brings with it higher close rates and project prices. The increased sales that made Keefer CCN’s Salesperson of the Year, he says, came from convincing homeowners with just a year or two left on the life of their roof to skip the pointless hassle of late-life repairs and simply replace.

And the knowledge that he had crossed to the other side is also useful in helping Keefer stay motivated. “You might take a day like yesterday,” MacLean says. (Heat and humidity had combined to make it feel like 100 degrees in Baltimore, which would translate to about 130 degrees on a roof.) “I looked at him and I said: ‘How do you like your job?’”

Sales Success for a New Breed

The Internet has given consumers access to almost limitless information, and homeowners are increasingly making use of that resource. Consumers are informed about your company and products before they even contact you, and their expectations of a salesperson have evolved accordingly. For the home improvement industry, this has completely altered the marketing and selling paradigm.

So in this new selling landscape, how would an installer-turned-salesperson fare? Potentially very well, simply because of his or her deep knowledge of the product and practical experience with its installation.

Today’s homeowner doesn’t want to be sold. Homeowners can see the close coming, and all they want is for the sales rep to provide the information they need—to go deeper into specific solutions for their home, thereby providing the information that they couldn’t get online. They want to see real expertise, and the installer-turned-salesperson is well-positioned to provide just that.

Anything akin to high pressure results in the prospect feeling that the salesperson is trying to get them to buy something they may not actually need.And, most importantly, he’s wasting their most precious resource: time.