ome years back, one of my clients found a matching pair of architectural corbels at an antique dealer. She held onto them, hoping to find a place for them in her house at some future time.

That time recently arrived when her front door finally gave way to years of wear and tear. Water had not only taken its toll on the 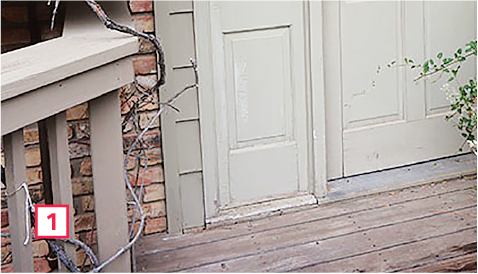 door and sidelite panels but had been seeping through joints where the jambs meet the sill and soaking into the unprotected wood beneath [1]. Over time, this wetting caused some of the decking around the entry door to rot. When I recommended a total door replacement, the client asked to incorporate the two corbels into the trim for the new door. 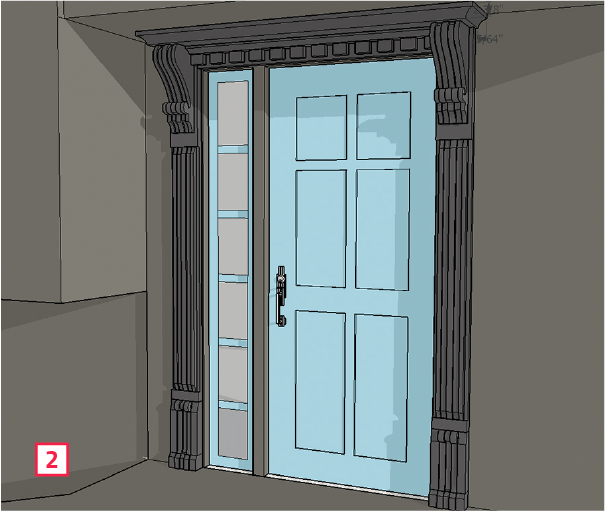 Her request is exactly the kind of situation for which I like to use SketchUp.  It’s an easy and inexpensive way to  visualize different iterations of a proposed design without having to put together several mock ups.

With an antique corbel in hand, I was able to easily create a digital duplicate in SketchUp, then use it to create various profiles and configurations for the vertical and horizontal millwork components. I brought in a dentil molding detail from another part of the house and, after comparing a handful of variations, came up with a final design that complemented the original corbels [2].

The deck in front of the door had been built with the ledger directly fastened against the Masonite siding, supported—along with the first few joists—by the original concrete stoop. Replacing the deck wasn’t in the budget, so I pried up just enough decking to provide access. The siding and circa-1970 “fuzzboard” sheathing had deteriorated from the repeated wetting, so I used a flat bar and a vacuum cleaner to remove what remained of them and cleaned out any loose, deteriorated wood. Luckily, the damage was minimal and not a structural concern. I put a layer of peel-and-stick membrane directly onto the side of the rim joist and, next to that, slid in a piece of 2-by redwood to provide support for the new threshold. I scribed and cut the redwood flush with the subfloor, and although I managed to drive a few GRK deck screws into it at an angle, it was also fully supported by the concrete.

The opening was out of level at the sill by about 3/16 inch, so to provide a solid level support for the new door threshold, I stacked several layers of a heavy, dense water-shield membrane, staggered in length, to build up the low end. This treatment also served to waterproof the sill.

The new door was narrower than the existing door, so the last step in prepping the opening was to infill the sheathing with plywood and to waterproof both sides with wide strips of peel-and-stick membrane.

With the new door in place and the millwork design approved by my client, I followed the 3-D SketchUp model to build the trim using some old-growth pine I found at a local mill [3A] [3B]. 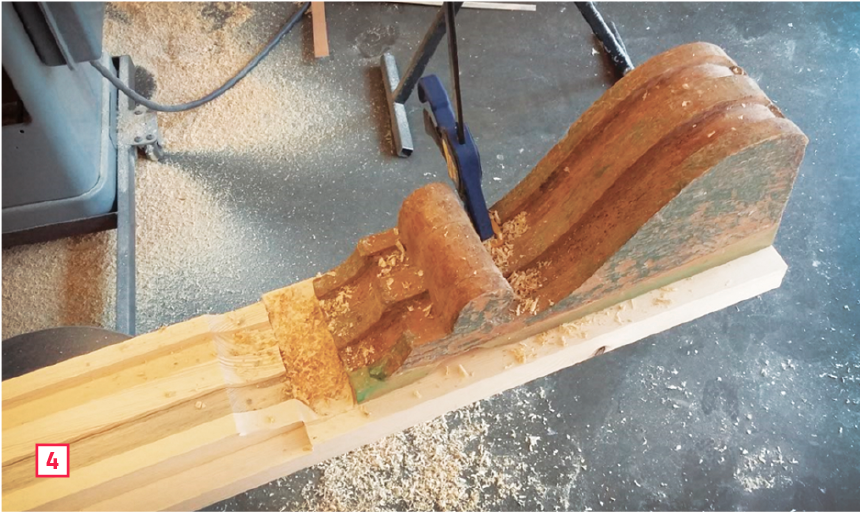 The corbels themselves were built up from several laminations cut to the desired profile, so I used the same technique to create the molding profiles for the middle and bottom sections of the casings. After cutting everything to the proper shape, I glued and clamped the laminations together with Titebond III, then clamped and glued the laminated assemblies—including the corbels—to a full-length piece of solid-wood casing [4]. Because everything was going to be painted, I filled small imperfections with Sashco’s Big Stretch caulk.

After preassembling the head and casings in the shop, I carried the whole thing to the jobsite in one piece. The exception was the crown molding, which I needed to scribe on site to several uneven bulges in the soffit panel. I dry-fit the crown in the shop, and when the miters were tight, held them together with CA (cyanoacrylate) glue and a block glued to the back side of the joints to strengthen them. Then I fastened the crown assembly in position temporarily with short screws.

I coordinated with a conscientious painter who back-primed and painted the entire assembly before it was installed, then applied a color coat after final installation. We’re pretty sure no water will be seeping in for many years to come.