2018 is the Year of Home Improvement Splurge Spending All signs point to high(er) home improvement spending in 2018, with much of the money going to outdoor living enhancements and hiring professionals.

In January, real disposable income increased 0.6 percent from the same time last year––the biggest rise in nearly three years, according to the National Association of Homebuilders. It should come as no surprise that personal consumption also rose in January: 2.7 percent year over year, to be exact.

One historical constant in the remodeling industry is that when disposable income rises, so do the amount of home improvement projects homeowners are willing to take on. We saw it clear as day between 2011 and 2013, when the economy was rapidly improving and home improvement spending increased by about $6 billion in two years.

So what are they spending on?

By a double-digit margin, outdoor living projects (43 percent) were the most popular among the surveyed homeowners, with decks, patios, and landscaping ranking at the top of the popular projects list for the fifth year in a row. Bathroom and kitchen remodels, at 31 and 26 percent, respectively, were also common responses, as was home repairs, which 28 percent of homeowners are planning. Since 2017, repairs was the only of those four project types that saw a decrease in the number of homeowners planning to take them on. 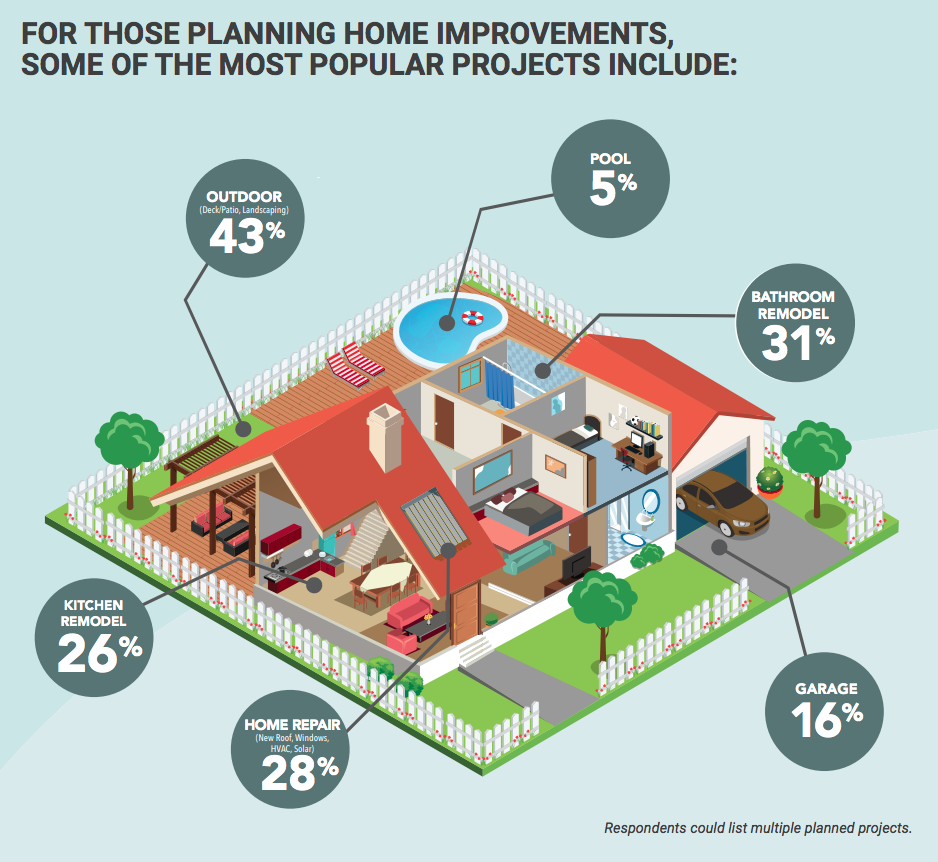 Another big finding from LightStream’s survey was that two-thirds of homeowners are planning to hire a professional for their projects. However, about half of those say that some of the work they’ll do themselves: all but the framing and structural work. The final third is the DIY group, which is largely made up of Millennials. Seventy percent of homeowners 18 to 34 do not plan to hire a professional. In the survey, young respondents explained their DIY inclinations, saying things like: “it’s more cost effective”; “(the work) gives me a sense of personal satisfaction”; and “I’ve done it before.”

The large number of DIYers does pose a problem for home improvement professionals, but it’s one likely not to be felt for a few years yet. For now, most homeowners are older. According to the National Multifamily Housing Council, the median homeowner age is currently 52, and 64 percent of homeowners are 45 or older.

What was the sample size of your survey and was it demographically diverse? Thanks

Thanks for reaching out, Carter. Please see our response in your email.