Persuading a homeowner to switch from tank to tankless in a water heater-replacement situation “takes a little bit of salesmanship,” says Matt Carver, owner of MLC Plumbing Inc. in Kenner, La. Putting on the hard sell is a task most of us — plumbers included — would happily avoid. But having successfully worked with tankless technology for the past five years, Carver has become a true believer, both professionally and personally:

“I always try to sell the homeowner on the advantages of tankless, including any available rebates,” he says, pointing to his own experience. “The first thing I did when I bought my own home several years ago was to run a new gas line, rework the water lines, and install a new outdoor unit.”

Given his own successful experience with tankless, Carver doesn’t shirk from the challenge of persuading skeptical customers. “People tend to like what they know, or at least they are slow to change,” he says, explaining the reluctance of the average American homeowner to forsake their storage-tank water heaters in favor of tankless. “Tankless is still kind of new in this country, which makes people uneasy at first. Plus, the initial cost of tankless versus tank scares many away.

“But I remind them that six to 10 years is all the life they are going to get out of a tank water heater: When it hits its warranty, it’s past its prime,” he continues. “Meanwhile, spending $500 every six to 10 years on a new tank is not a terribly satisfying experience, especially it if breaks down and dumps its contents everywhere. Buy a tankless water heater, and you’ll recoup the up-front premium in fuel-bill savings over time, and you won’t have to deal with the headaches of replacement nearly as often. It’s peace of mind.”

Carver’s arguments are undeniably strong and get people thinking. But the cost gap between tank and tankless is still a major hurdle for many households. Carver’s business is focused on helping consumers renovate their homes, which should be a favorable scenario for going tankless. The problem, he says, is that “most older homes are not set up for tankless. New gas lines must be run, the water lines reworked, the venting changed out, the roof refinished, and all those costs can add up pretty fast.”

But new tankless technology that came onto the market last fall allows the installer to use the same gas, water and vent lines as the old tank water heater, sparing installers the ordeal of creating new ones. That cuts installation time and cost substantially. Carver used the Noritz EZTR40 on a recent residential replacement job and slashed his normal tankless installation time by roughly two-thirds. The 28-year old plumber, who has worked with the tools since he was 13, came away an enthusiastic convert.

Application: Hot water for a single-family home with one-and-a-half bathrooms.

Problem: Older, 40-gallon, tank-type water heater was leaking. Replacing it with another tank unit would have required a drip pan, which did not fit well into the application space, 5-foot x 8-foot laundry room.

Solution: Worried that she would be forever tripping over the pan, the homeowner opted for tankless, a new Noritz EZTR40, installed in February 2015.

Payoff: New, wall-hung tankless water heater requires a small fraction of the space of the old storage-tank unit, enabling the homeowner freshen up the space to create a more pleasant environment in her laundry room.

Installation: Handled by one installer in two hours, including removal of the old tank-type unit. The EZTR40 was able to make use of existing water, gas and vent lines, cutting installation time — and cost — dramatically. “It typically takes five to six hours to change out a tank unit for a tankless water heater,” says installer Matt Carver. “But the EZTR cut that time by half to two-thirds.”

There was a special irony to Carver’s first encounter with the new technology this past winter. Predictably, the homeowner’s switch to tankless was driven by anticipated savings — but not in installation labor or even monthly fuel bills, but on… space.

Most contractors who champion tankless as strongly as Carver stress the energy-savings story, and rightly so: Why waste fuel and dollars cooking water 24/7/365 when you can have it far more economically on demand? But the “zero footprint” advantage of a wall-hung tankless water heater can be every bit as compelling to a homeowner.

Carver’s customer in this instance — the owner of a 40-year-old, single-family residence in Kenner — was having problems with her 40-gallon, gas-fired tank water heater. Serving the needs of the bath-and-half household, the unit was located in a 5-foot x 8-foot laundry room with a stacked washer-and-dryer setup inside the slab-on-grade structure. The owner, who bought the home in 1998, says the unit’s installation predates her purchase. Given its age, there really was little surprise when it began to leak in early February.

After tucking in a few towels to staunch the slow-but-steady leak, the homeowner phoned Carver to alert him to the problem. She then headed for The Home Depot where, without much hesitation, she went the customary like-for-like route, making a reservation for another 40-gallon unit. Carver would pick it up and install it in another day or so, once he had time to get to her house.

In the meantime, the busy plumber dispatched a colleague to the home to measure the space for the drip pan that would be required. The pan would fit the space beneath the new heater; but, to the distress of Carver’s customer, only barely. The way it would protrude into the room left the homeowner fearful that she would be forever tripping over it, scattering laundry everywhere. There had to be another, safer and more workable solution.

At that point, Carver made his case on behalf of tankless. But the installed cost of $2,000 — roughly twice that of the 40-gallon tank unit on hold at Depot — put a chill on Carver’s pitch. This hesitation did not last long, however, as she pondered her predicament. After all, the tankless water heater could hang on a wall, and no drip pan was required. Instead of absorbing more precious space in an already cramped area, this solution would actually use less — much less — making the room both more attractive and more functional.

“To her credit, my customer was thinking about more than her immediate needs,” recalls Carver, who has worked for her on many household plumbing projects. “Someday, she will want to sell that home, so she quickly realized that a money-saving, energy-efficient tankless water heater could be an awesome selling point to a potential buyer. At that point, the price tag of the installed water heater was no longer just a cost, but an investment that raised the long-term value of her home.”

Thus, another tankless convert had been won. 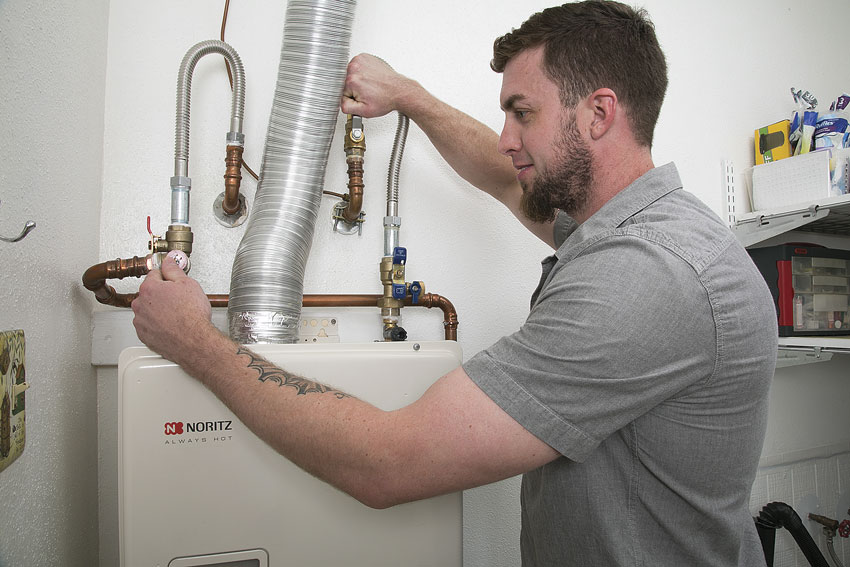 Matt Carver, owner of MLC Plumbing Inc. in Kenner, La., used the Noritz EZTR40 for the first time recently on a residential installation. The new tankless technology allowed him to reuse the same water-supply, vent and gas lines that were previously hooked to the tank unit the EZTR replaced. Photo: Kathy Anderson Photography LLC

Given the green light, Carver had his first encounter with the new EZTR40, and the unit’s installer-friendly features did not disappoint. The home’s existing half-inch gas line was quickly disconnected from the tank unit and, once the latter was removed, reattached to the tankless unit. The new unit’s top-mounted connections permitted easy hookup to the connectors used by the previous tank unit. For venting, Carver threaded the two-inch, flexible polypropylene tubing that ships with the water heater directly through the existing B-Vent used by the old water heater it is replacing.

Total installation time for Carver, working alone: about two hours, which was a huge improvement over the four to eight hours he would typically need to replace a tank water heater with a conventional tankless unit.

Carver recalls only two complications during the installation. The sheet rock in the ceiling began to crumble when he went to fix an adapter plate for the venting on its way to the roof. “I had to use wood around the sheet rock to connect the vent adapter. That slowed me down a bit, but it was not an impossible situation.”

The EZTR40 is a condensing water heater, and the second complication involved the condensation line. It had to be tied into the home’s sewer line, rather than run through the wall to the outdoors. Here Carver capitalized on the location, the laundry room, by cutting into the waste stack next to the washing machine, adding a tee and running a half-inch line about four feet from the water heater to handle the condensation.

“The job wasn’t difficult because the stack is made of ABS,” he says. “Had it been cast iron soil pipe, I would have needed more time to make that connection.”

These minor issues not withstanding, Carver believes he can and will speed the clock on future installs. “With experience, I believe I can cut that two-hour time frame — maybe by half,” he says. “This was my first experience with a very different, new product. I took my time, making sure I did everything was done by the book.” Familiarity, in short, will bring greater installation speed without sacrificing workmanship.

And there will be plenty of “next time’s,” Carver promises.

“I change out a water heater a week on average, with 40-gallon units representing about a third of the total,” he explains, noting that the EZTR40 is engineered specifically to facilitate replacing 40-gallon tank models. “In those situations, I would absolutely use this technology again.”

Jason Fleming serves as marketing and customer care manager for Noritz America, based at company headquarters in Fountain Valley, Calif. He can be reached at: (714) 433-2905 ext. 7813.

Reusing the same gas, water, and vent lines as an existing tank system, contractor Matt Carver cuts installation time for tankless heater by more than half.

Solar Power By the Numbers