Likewise, Contant says he’s completed additional projects for several clients he found at home shows—and those customers have referred his remodeling firm to others.

“If we get two to three sales, [the show] was a success,” he says. “It pays for itself and then some.”

Yet while home shows can clearly be worth the expense, they are only effective if you properly plan, execute, and follow up. Here are recommendations from industry professionals.

Get the word out on your website and in advertising, emails and mailings to prospective and past clients.

Find the best-possible booth location. Secure a well-trafficked spot, even if it costs more than those in other sections, Contant says. “Don’t get stuck in the back, unless there is something to bring people there,” he adds, such as concessions.

Mitigate costs. Contant asks suppliers to share his booth and to supply products for drawings. 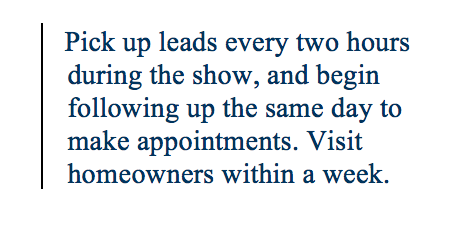 Expertly staff the booth. If you don’t have a large company, recruit your spouse, older children, and even your lead carpenter to work the show. Or, hire experienced contract booth personnel, says Rick Menendez, a St. Louis-based consultant who has worked full time for several remodelers.

Finally, train everyone on what to say and how to say it. “It is critical to have people who know what they are doing,” says Menendez of Voosh!

The booth should look professional, as well: clean, neat, and uncluttered. Plus, don’t sit, eat, or text and read email. And never leave the booth unmanned. “You can’t just put a table out with brochures and think anything is going to happen,” Contant says.

Show off your best work. Display projects with before and after photos, but don’t visually overload the space. Also, have a laptop loaded with images, and if possible, project the photos on a large screen or a nearby wall.

Finally, place spot lights on photos hanging around the booth and on products.

Be assertive, but not aggressive.

“Be pleasant, but relentless,” Menendez says. He recommends that booth staff not be salespeople, but “demonstrators who … have enough information to get the [homeowner] interested.”

Exhibitors should set an objective of obtaining a certain number of leads, Fantle says. He recommends asking all visitors for their phone numbers and their street and email addresses.

Menendez notes that he has paid staff 25 cents for each home, cell, and work number they collect. He also suggests not giving away printed materials; instead, ask the attendee for his or her contact info, and then mail the literature.

Contests, drawings, and giveaways always attract attendees. Contant says that one of his popular drawings was for a RugBuddy, a portable electric heater supplied by Speedheat.

One of Menendez’s former employers, Melani Bros., in Yorktown, Va., gave away coupon books with discounts to restaurants and other retailers. Staff would entice folks into the booth by saying, “I want to give you this book that has coupons worth $1,000.”

However, designer Richard MacCrea recommends that the prize or giveaway be related to your business, such as a discount or free consultation. “Make it a stepping stone to new business,” says MacCrea, who founded The Mountain Home Show to promote the remodelers and builders he works with in North-Central Georgia.

Finally, free food will draw a crowd. Contant even has set up a small kitchen for cooking demonstrations, whipping up everything from shrimp scampi to chocolate chip cookies.

The week after a show, Atlanta Design & Build contacts homeowners who said they were planning a project during the next three months, and then quickly moves on to those who said six to 12 months.

Menendez says that Melani Bros. had someone pick up leads every two hours during the show, and began following up the same day to make appointments. The company's sales team then visited the homeowners within a week after the show, he says.

Lastly, communication with leads should be ongoing, Fantle says. Remodelers can check back with prospects three months after the show, and consider sending them an annual email. “It’s quick and easy and costs very little,” he adds. PR

Are You a Farmer or a Hunter?

Industry advisor Mark Richardson says that over the last year, there’s been a major shift in the remodeling business from a farming mentality to a hunting skill set

Going Digital to Market Your Business

Is your business equipped to market to the digital generation?

Breaking Through the Brand

Three remodeling companies share their motivations, stories, and experiences of redefining their outward identities for the next stage of growth

The Pinnacle Experience Delivers the Must-Attend Event of 2022

Are You a Farmer or a Hunter?

Industry advisor Mark Richardson says that over the last year, there’s been a major shift in the remodeling business from a farming mentality to a hunting skill set

Going Digital to Market Your Business

Is your business equipped to market to the digital generation?

Breaking Through the Brand

Three remodeling companies share their motivations, stories, and experiences of redefining their outward identities for the next stage of growth