The 5 W’s of Homeowner Seminars

On a sunny Saturday in January, about 10 staff members of Normandy Remodeling spent the morning in the firm’s suburban Chicago showroom with 50 potential clients explaining how a kitchen renovation happens and answering questions. By the end of the seminar, the staff had booked nine appointments for consultations, and marketing director Kristina Ferrigan says she’s confident that three of those appointments will lead to sales.

The company’s average conversion rate—based on appointments generated through social media, newspaper advertising, referrals, and other avenues—is one out of five. For homeowner seminars, which Normandy hosts twice a month, Ferrigan says the number spikes to one in three.

The seminars, Ferrigan says, “get us incredibly motivated, highly qualified people. After they have sat through an hour of hearing us talk, they know whether we’re the right fit for them or not.”

That doesn’t happen by chance. Homeowner seminars demand staff time for planning; a strategy for filling the seats; substantial preparation by presenters; and a solid plan for following up with each attendee with the hope of signing new clients.

Here’s a rundown of best practices for remodeler-sponsored educational seminars.

While some remodelers try to pack 100 or more homeowners into each seminar, others limit enrollment to between 10 and 20 people so each attendee will have a chance to participate.

No matter the size of the audience, the seminar presenter should be a practiced speaker and a deliver a message that’s important to homeowners. The presentation should include lots of photos and examples, and leave plenty of time for questions and answers.

Kyle Hunt, a marketing consultant for home remodelers and owner of Remodel Your Marketing, in Brighton, Mich., suggests limiting the length of the presentation to an hour and a half, including 30 minutes for questions. And he likes having more than one lively presenter during that time to keep the message from getting stale.

A remodeling company that wants to boost its kitchen business might focus a homeowner seminar on kitchen trends, financing a kitchen remodel, or the difference between a simple update and a full redesign. Similarly, a shop with a focus on bathrooms might confine its seminars to topics involving shower conversions, enlarging the master bath, or adding a powder room to the home.

Still, some remodelers have drawn large crowds to sessions offering more general education, like “how to hire a contractor,” “the most common mistakes homeowners make when remodeling,” or “how to plan a remodeling project.”

Whatever the topic, remodelers with seminar experience agree that audiences quickly tire of long lectures—especially on weeknights after attendees have worked all day—and roll their eyes at blatant sales presentations. But they respond well to photo-rich slide shows, before-and-after pictures of kitchens and baths, stories about other clients’ experiences, and question-and-answer sessions. They especially like the opportunity to talk one-on-one with a designer about their specific projects.

The best place to host a seminar is in your own showroom, where the displays will reinforce participants’ desire for something new. Cabin John, Md., remodeling firm Anthony Wilder Design/Build plans to show off the new kitchen it built at its offices by having a local chef serve lunch there to seminar attendees.

No showroom? No worries. Remodeler-turned-industry consultant David Lupberger of Boulder, Colo.-based RemodelForce, used to pay just $50 or so to rent a room at a library or in an elementary school when he presented his homeowner seminars. A bonus: The library publicized the seminars in its newsletter, and the school put the word out through its PTA.

Lesson learned: When Normandy partnered with an appliance store and held a seminar in the appliance showroom, 110 people showed up. But not one of them booked an appointment, Ferrigan says, because they were there to learn about and buy appliances, not remodeling services. For that reason, “we don’t hold seminars off-site anymore,” she says.

Saturday mornings and Thursday evenings are popular times for seminars, Hunt notes; weekend events tend to attract both spouses, and late-week evenings tend to be less busy for homeowners than earlier in the week.

Most remodelers provide refreshments, which can be as lavish as buffet lunches or as simple as coffee and doughnuts. And all keep seminars brief, especially in the evenings when people are tired.

Some remodelers hold weekly or monthly seminars, but most offer them just one to four times a year. “It all depends on how often you can get a group of 10 to 20 people in the room,” Hunt says. “If you have a big enough walk-in traffic list to do a seminar once a month, go for it, if it works.”

“The more we can be perceived as an expert, the easier it is for us to generate leads and close sales,” Hunt says. “When you’re up front and are the expert and you are educating [homeowners] for an hour or two hours, that’s a wonderful position to put yourself and your business in.”

Seminars also allow homeowners—who are unlikely to attend unless they’re fairly serious about starting a remodeling project at some point—to get to know a remodeler’s staff and gauge whether they like and trust them. Those who do will consider hiring that company when they’re ready to start.

In fact, while the seminar is educational for the homeowner, it can also be profitable for the remodeler who follows up with all of the participants to ask them for their business.

Hunt stresses the importance of collecting attendees’ contact information and as many details as possible about homeowners’ potential projects.

At Normandy Remodeling, staff members call each attendee on the phone within four days after the seminar to ask how the participant enjoyed the event; if the presenter seemed knowledgeable; whether the meeting time was convenient; and whether the homeowner would like to meet to discuss a specific project.

Still, Ferrigan says, it’s a low-pressure, call-us-when-you’re-ready conversation. “Sometimes we get an appointment,” she says, “and sometimes you go for weeks without any calls—and then they start to come in.”

Without those follow-up calls, says Hunt, staff time and effort for planning a seminar most likely will go unrewarded. “I need to make sure that I track very clearly both the leads and the sales that I generate from each seminar,” he says.

Getting homeowners to attend face-to-face seminars is perhaps the greatest challenge of producing such an event. One of the most inexpensive, effective ways for remodelers to attract an audience is to reach out to current and past clients and to prospects they have already qualified, Hunt suggests.

Some remodelers also partner with local real estate agents, architects, bankers, or interior designers who have a remodeling-related message to share and client lists of their own to throw into the mix, Hunt says. Anthony Wilder, for instance, has joined forces with a local banker for the company’s first homeowner seminar. The banker will educate homeowners about how to finance their remodeling projects and will advertise the seminar to his own clients.

Others market their seminars in the local newspaper and on social media sites, and some pick up the phone and call active prospects to personally invite them.

Anthony Wilder, which will host its first seminar this spring, is crafting an invitation list that will fill just a handful of seats with highly qualified potential clients who “clearly understand you’re not going to get a high-quality kitchen remodel for $20,000,” says marketing director Danielle Frye. “They understand that it’s an investment. The theory is, we’re going to have the right audience, the right people in front of us,” so the firm can convert as many attendees into clients as possible.

And Frye says nobody at the high-end design/build firm, located in an upscale Washington, D.C., suburb, expects to close a deal the day of the seminar. “We just want to make it clear to [prospects] that we’re here if they want to start remodeling a home,” she says. “It will take two or three meetings before we ask for a deposit.”

Still, it’s not impossible. Ferrigan says that a handful of participants have booked appointments as soon as the presentation ended. And a few, once they receive a postcard in the mail inviting them to a seminar, have skipped the event but called the remodeler directly to book meetings. 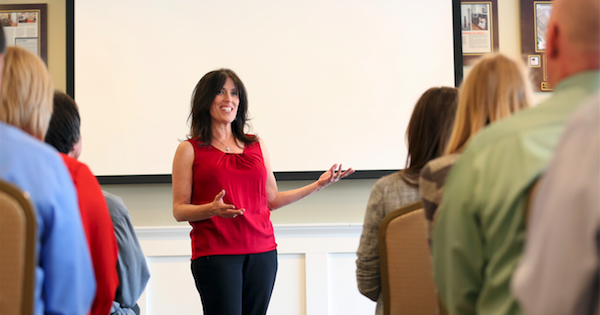 Homeowner seminars aren’t right for every remodeler. A firm without a strong marketing program to generate leads elsewhere shouldn’t heavily invest in seminars before it has mastered the fundamentals. “We talk about homeowner seminars like they’re the greatest thing in the world—and they can be,” marketing consultant Kyle Hunt says. “But if they’re distracting us from other forms of marketing that have a much better return on investment, maybe we need to focus our time and resources elsewhere first.”

At least one company is finding that its seminars can’t compete with its own website when it comes to educating potential clients. After hosting frequent, successful seminars over eight years, Case Design/Remodeling San Jose is now winding down its Saturday kitchen and bath sessions.

Owner Jim Kabel says that as the company has bolstered its website, potential clients are getting the information they need online. Once a sure bet with 15 to 20 attendees—half of whom would ask for consultations, which typically led to two sales—the latest seminars drew just five or 10 participants. And in January, nobody registered for a scheduled seminar.

Kabel says he’s OK with that. “If one marketing activity tends to dwindle and another comes up to replace it, that’s just a natural evolution of how people get their information,” he says, noting that the seminars tended to attract “tire kickers” who weren’t quite ready to hire a remodeler. “People are busy with their lives,” he says. “It’s hard to take two hours of their day ... to come to a seminar.”

---
Sharon O’Malley has covered the home building and remodeling industries for 20 years. She is based in College Park, Md., where she is a member of the adjunct faculty at the University of Maryland’s Philip Merrill College of Journalism.

Here’s how to make presentations that will grow your business