The owners of this mid-century modern home in Johnston, Iowa, had been planning to remodel the kitchen for seven years, but that project took a back seat to multiple other renovations. When it was finally time to start on the kitchen, they recognized that it had to tie together all of the previous projects. A number of rooms adjacent to the kitchen were poorly connected either visually or functionally, and the clients wanted the new kitchen to incorporate these areas in a way that would facilitate entertaining and daily living for a family of five. 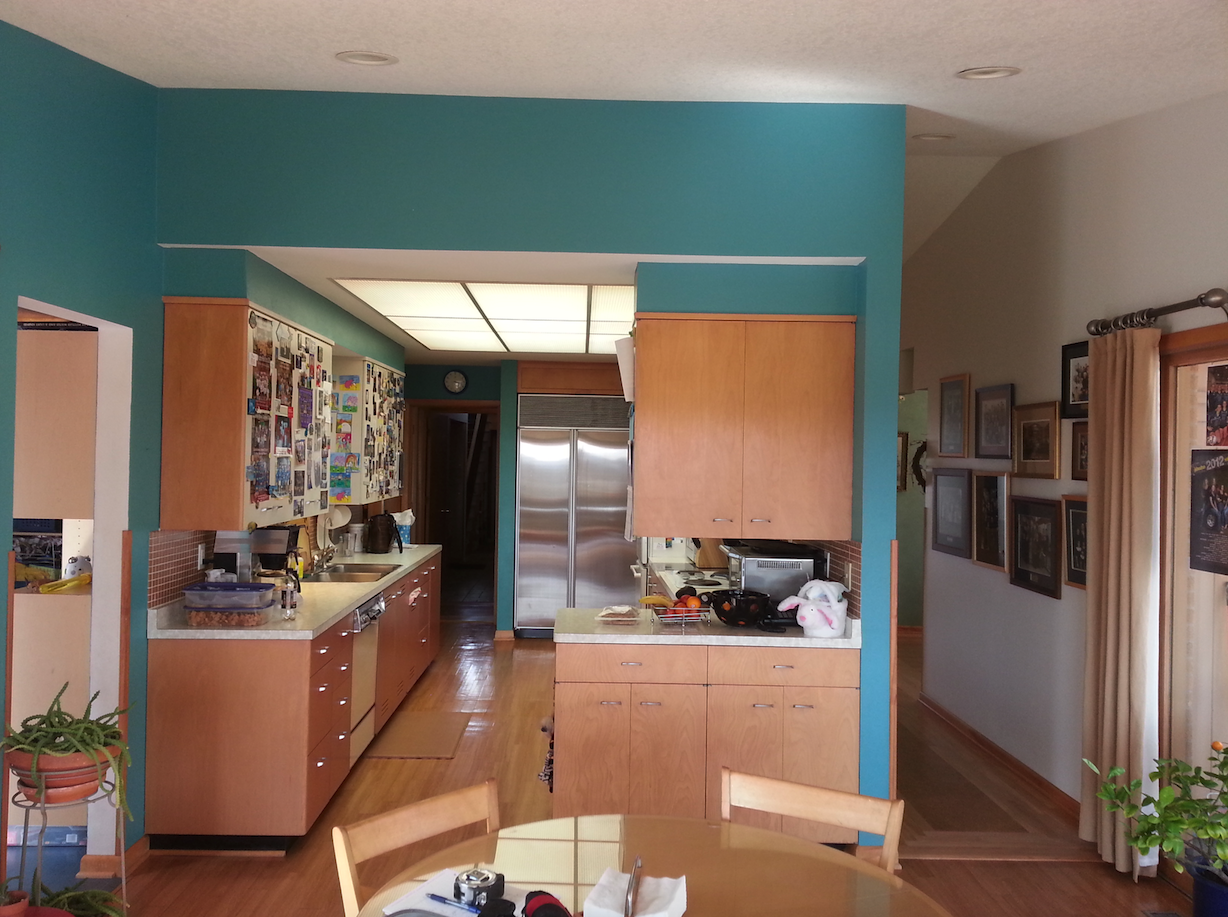 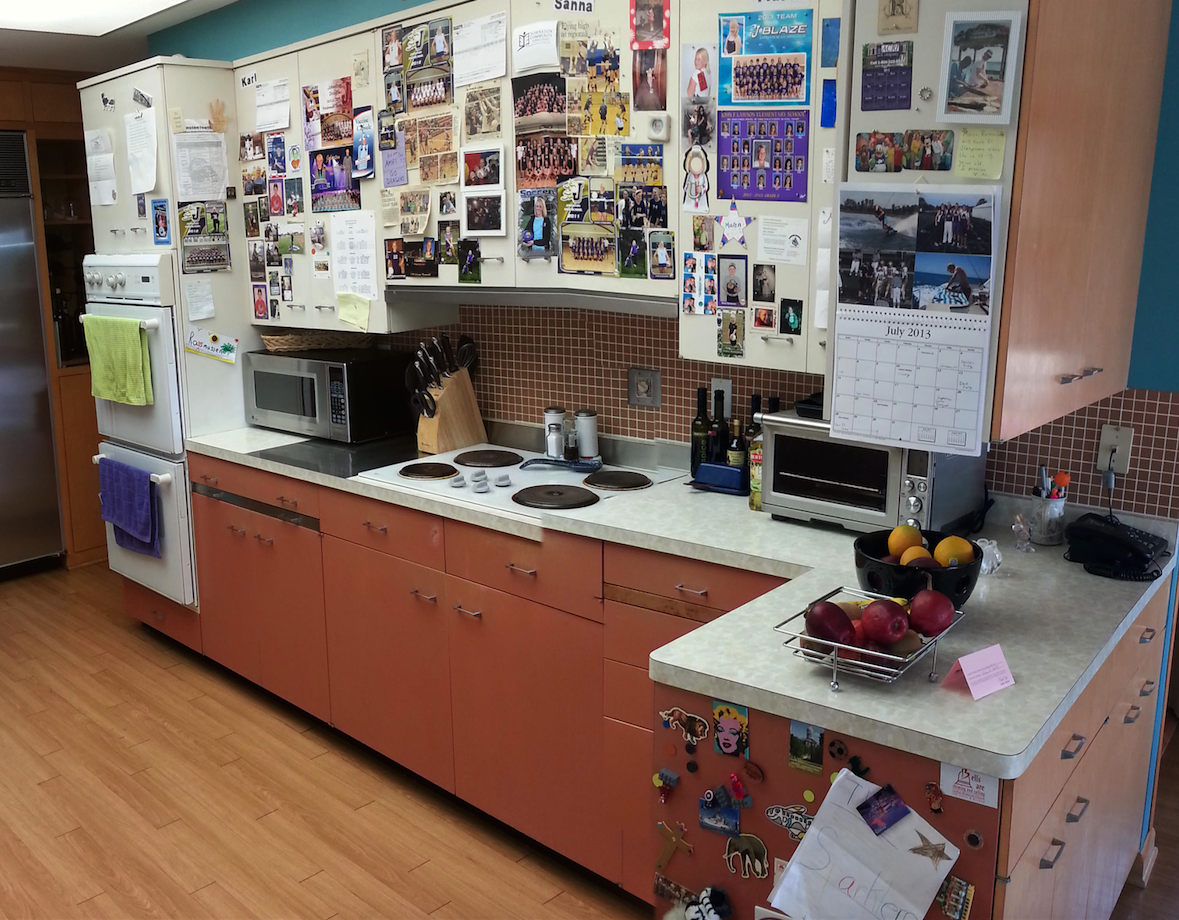 “The original house was built in 1966 and had a strong modern aesthetic, which the clients wanted to respect while creating something more contemporary,” says Chaden Halfhill, owner of Silent Rivers Design + Build, in Clive, Iowa (see "before" photos, above). “As walls were taken down or put up, views to and from the kitchen had to be considered from many different vantage points to make sure that the new space accomplished its goal of integrating the whole house.”

Silent Rivers designer Tyson Leyendecker removed the walls around the original kitchen to visually better connect it to the rest of the main floor and draw more natural light throughout the core of the home. Leyendecker opened the wall between the kitchen and an original playroom and created bar seating in its place. He also removed exterior walls to incorporate a screened porch into the conditioned living space.

A 650-gallon saltwater aquarium was installed in the location of a former closet, adding a load of more than 6,000 pounds. “Because we added the structural framing needed to carry the new load during a previous project, none of the finished space below the aquarium was impacted,” Halfhill says. The aquarium is visible from any point in and around the kitchen.

There was an existing loft in an adjacent playroom that is accessed by a ship’s ladder. As part of the remodel, the function of that playroom changed to include seating and a music area, and the ship’s ladder was removed. “In its place we built a cantilevered, wall-mounted ladder out of natural birch and stainless steel and created a hatch opening in the loft floor so the children can still access the loft,” he says. “We also opened a window so the kids can look down into the kitchen from the loft.”

There are as many as five different seating areas around the kitchen, plus the food prep area, creating options for congregating and socializing. The clients wanted to have a television somewhere in the space. Rather than mounting the TV on a wall with an articulating arm, Silent Rivers placed it in the island on a lift that can rotate 180 degrees in either direction. When not in use, the TV can be hidden away inside the island.

In addition, the clients asked for a magnetic surface to display items. “By reusing their existing steel cabinets in the new walk-in pantry, we were able to accommodate their request,” Halfhill says. The company also reused the mixer cabinet from the original kitchen, after giving the door a new coat of paint. 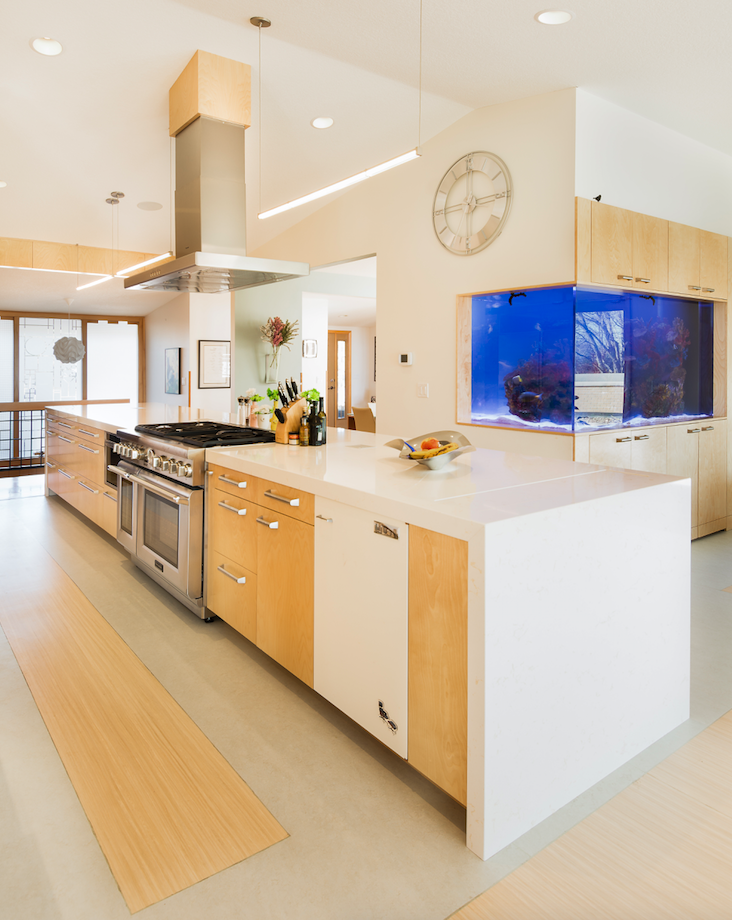 The stone ballasted roof was removed and replaced with a standing-seam metal roof, which lightened the roof load and eliminated the need for additional structural beams and columns. This allowed the ceiling plane to remain smooth and disguised the transition from new to old.

By adding more windows and pushing walls out, Silent Rivers was able to improve views and connections to the exterior spaces around the house. “The clients are extremely happy with their kitchen remodel,” Halfhill says. “They now spend more time together in and near the kitchen, and they entertain more frequently.”

The judges were nearly as enthusiastic about the remodel as the clients. “Every so often you run across a project that is so magnificently detailed, so artfully engineered, so masterfully executed, that you are captivated by every facet of the work,” they said. “It manages to imbue incredible life in the simplest and cleanest of lines—a near impossible feat.”

View a slide show of details from the project