Dozens of light meter apps are available for IOS and android smartphones and tablets.

Designers and remodelers put a lot of faith in undercabinet lighting—I’ve often heard it described as “task lighting” for the kitchen, with everything else (including ceiling fixtures, pendants, and recessed lighting) being some sort of decorative, ambient, or accent lighting. This might be true if every kitchen were equipped with undercabinet lights (many production homes don’t include them) and if every homeowner actually turned them on (but they don’t). In fact, I can think of plenty of reasons why you can’t depend on undercabinet lights for task lighting:

• There’s nowhere to put them at a window or at most islands or peninsulas.

• There’s nowhere to put them in a loft-style kitchen with no uppers.

• People don’t use halogen or xenon undercabinet lights because they add heat to a kitchen already overheated from cooking.

• The reflected glare off a polished countertop surface also discourages the homeowners from turning them on.

• You have to look really hard to find undercabinet lighting that produces anything close to the 50 foot-candles (fc) that NKBA and IES recommend.

As a result, in my opinion, recessed “can” lighting continues to be the first and most important layer of kitchen lighting.

You Can’t Manage What
You Don’t Measure 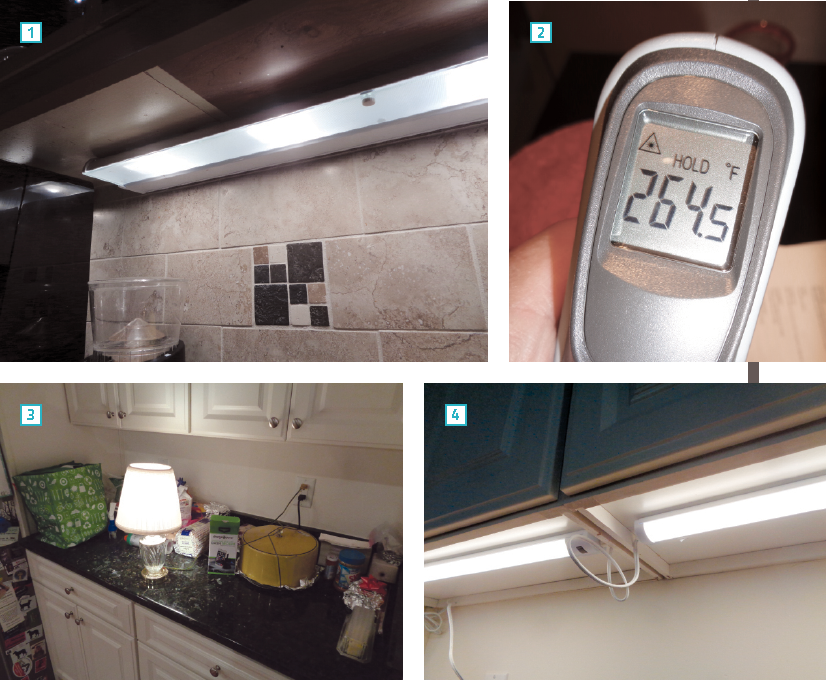 Popular 10 years ago, lensed xenon fixtures [1] provide diffused light, but also generate so much heat—in this case, 264°F [2]—that many homeowners refrain from
using them.

This kitchen was so poorly lit that the homeowner stationed a small lamp directly on the countertop [3]. The remedy was a pair of GE plug-in LED undercabinet fixtures [4] that produced 88 fc directly underneath and 17 fc at the front of the counter.

To find out, I tested a variety of fixtures, all mounted just behind the front rail of the upper cabinets. The results were underwhelming.

Xenon. The xenon fixtures I tested [1] were state-of-the-art 10 years ago, and gave me 34 fc directly under them, but 6 inches closer to the edge of the counter, where most kitchen work occurs, they produced only 12 fc. Plus, the homeowner admitted that he almost never turned the undercabinet lights on because of how much heat they create. I used my infrared thermometer and clocked them at 264°F [2] (first-degree burns occur at as low as 111°F).

Fluorescents. Remember fluorescent undercabinet lights? They used to be my go-to fixture for medium-budget kitchens because they spread the light nicely along the counter and backsplash. Well, you can still buy them, but they don’t perform very well: In my test I got 12 fc measured 12 inches in front of the fixture. This corresponded to what would have been the front of the countertop had they not been installed against the backsplash. The actual front-of-counter measurement was a measly 4 fc.

LEDs. I had the chance to do some good at my mother’s house during a recent visit. One side of her kitchen was as dark as night, and her workaround was to bring in a small lamp from the bedroom [3]. It kind of worked, but the lamp got in the way.

Want more? Check out our story where we totally reconsider recessed kitchen lighting.

Heading to the Big Box store, I bought a pair of nifty GE LED plug-in undercabinet fixtures [4]. When installed behind the front rail of the cabinet, they measured 88 fc on the countertop directly below, dropping to 17 fc in the work zone 6 inches in from the edge of the counter. I was impressed that these fixtures were dimmable and turned on with a wave of your hand under them, plus they had a switch to adjust the color temperature from 2700K to 4000K (higher color temps deliver more foot-candles). But there was also a lot of glare from the granite countertop (see “Glaring Problem,” page 102).

In other LED tests, another plug-in, this one by Utilitech, measured 15 fc in the work zone. Bare LED tape measured 20 fc in the same work zone, but had some wicked glare off the counter because there was no diffusing lens covering the diodes.

At 12 fc to 20 fc in the work zone, none of these types of lighting by themselves comes close to delivering the minimum 50 fc that NKBA and IES recommend. This is why I combine them with properly placed recessed can lighting and decorative or ambient fixtures to flesh out the lighting plan. 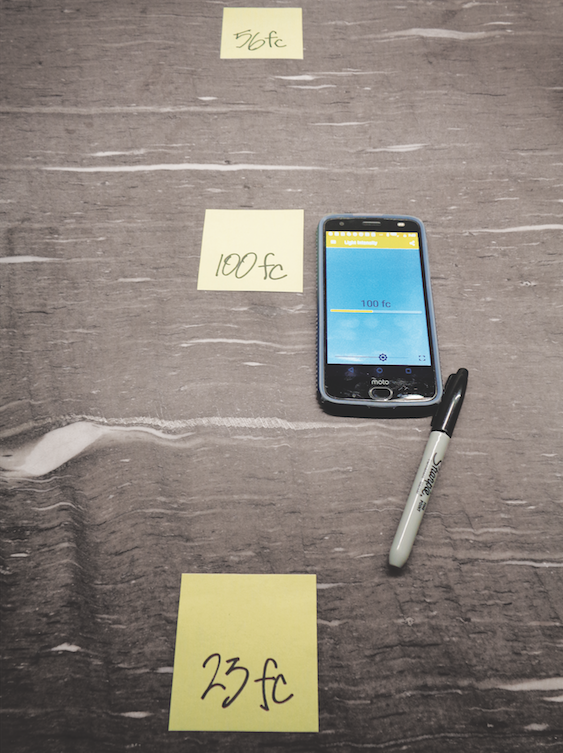 Rules of Thumb for Undercabinet Lighting

• Locate the fixtures at the front of the upper cabinet.

• Use the longest fixture that fits to provide even light across the entire counter.

• Match the color temperature of the downlights.

• Use dimmers switches on all kitchen lighting.

• Use fixtures with minimum output of 400 lumens per foot (not xenon or fluorescents, they’re obsolete).

• Use a light-colored backsplash to reflect more light.

Regarding the above image: GM Lighting’s LARC6 Lightbar delivered more light to the work zone than any other fixture measured. The high reading at the back of the counter is likely due to the reflectivity of the light-colored backsplash tile.

What Works Best for Undercabinet Lighting

My go-to undercabinet fixture is a high-output LED lensed strip from Task Lighting’s Sempria SG9 Series, which according to the manufacturer produces 42 fc at the front of the counter. A few weeks ago I visited a recently completed kitchen remodel to measure Sempria’s actual performance.

Using the Light Companion app on my phone [5], I measured 100 fc directly under the fixture, which was mounted behind the front rail of the upper cabinet, but just 23 fc at the front of the counter, about half of what the manufacturer claimed. A conversation with the remodeling contractor solved that mystery: The electrician had substituted GM Lighting’s LARC6 Dimmable LED Lightbar, a 24-volt fixture that measures a scant 3⁄8 x 1¼ inches (HxW).

Light intensity varies with distance. The Lightbar delivered more light to the work zone than any other fixture I measured, but there was still a dramatic drop-off in light level across the counter. The physics behind this phenomenon is called the “inverse square law,” which for lighting says that light intensity is inversely proportional to the square of the distance from the light source. In plain English, this means that the intensity of the light at a point 2 feet away from the source is a quarter of what it is at a point 1 foot away; at 3 feet away, it’s one-ninth, and so on. But enough math! Just know that light levels fall off dramatically over distance.

Measure on-site. It’s hard to find photometric data for undercabinet lights, even on manufacturer websites. And when you do find it, it’s not clear where the measurements were taken in relation to the fixture. Along with the steep drop-off in light levels over distance, these are good reasons to test actual light levels. One solution is to use a free light meter app on your phone to measure how many foot-candles are actually being delivered to the work surface.

Fixture location. If you’ve installed undercabinet lights against the back wall all these years, please stop—unless your goal is to light up the cookie jars against the backsplash. Instead, install the fixtures just behind the front rail (you can hide the power cord with flat wiremold). This throws light both backward and forward, and delivers more light to the front of the counter.

Want more? Check out our top lighting products for 2020.

Belt and suspenders. As I’ve said in previous articles (“Recessed Kitchen Lighting Reconsidered,” May 2017, and “Lighting: Theory Meets Practice,” March 2018), I recommend trying to get 50 fc from the overhead task lights and another 50 fc from the undercabinet lights. For best results, use undercabinet LEDs that put out a minimum 400 lumens per foot; 500 lumens is even better, but harder to find.

I also recommend dimmers on both the cans and the undercabinet lights. This will enable the homeowners to tailor their mix of light sources to the task at hand and personal preference.

This is classic belt-and-suspenders thinking, but the illumination needs of homeowners vary, and they also increase over time. Will people run both lighting circuits at full tilt all the time? Maybe not, but I’d rather provide for too much light than too little.

Want to learn more about best practices for lighting? Check out Walter's other piece, "7 Tips for Better Bathroom Lighting."

You mention that Sempria is

Great to see some information about under cabinet lighting

This is one of the best brief explanations I have read. Thank you.

This gave me more info in 5 min. about what i needed, to decide what i want, than anything I've seen in a store or reading packages. Thank you.

A big thank you to Doug Walter!
Just to explain a bit of what Doug was saying; if he was measuring output of LiteShelf, the measurements would be 45fc in the back, 45fc in the middle, and 15fc in the front (where the ceiling light takes over). Since LiteShelf has no glare or dark areas, the light is much more effective, and less output is needed.
See the LiteShelf difference;
https://www.youtube.com/watch?v=t29rO8e8kNY
www.LiteShelf.com - 732.747.4353 - Info@LiteShelf.com
Doug, thank you again!

The next generation of Lite Shelf?

You are welcome; the project is very unique and puts out a diffuse glow without lines or point of glare. I hope in your next generation you could find a way to arrange photometrics to put out 45 fc all the way from back wall to front edge!

Doug, are you saying that "LiteShelf" puts out a diffuse glow without lines or points of glare? I saw one kitchen picture on line demonstrating LiteShelf and the entire LiteShelf panel appeared to be reflected on the countertop?

Carole, you are absolutely right, on a dark polished granite counter you will see a reflection of the entire underside light; that's the nature of a specular surface. But the wide glow is less offensive than points of light of a bare LED tape, or LED pucks. It's less noticeable on a light colored polished countertop, but the best solution is to do a honed or matte finish top to get rid of the reflection. Especially if there are lots of windows in the kitchen; the reflection of direct sunlight is way more powerful than an undercabinet LED.

Thank you so much, seen terrible results most times, remodeling currently and need and want it, but effective and correctly, I hope this helps. Thank you very much

Do you have a recommendation for kitchen ceiling recess lightings?

Boy, do I have recommendations for recessed ceiling lights in kitchens, the workhorses of kitchen lighting. Undercabinets are a necessary partner, along with decorative/ambient fixtures. See several articles in this magazine/website I've written, especially The Right Way to Light a Kitchen Feb 2016, Lighting Theory vs Practice March 2018, and the Skinny on LED's June 2015.

For LED tapes mounted near

For LED tapes mounted near the front like you said is best, where do you put the 24v power supply and led drivers?