The Weekly is STREAMING now. Join us at HorizonTV
Jobsite Know-How Concrete slabs crack, sink and settle because of bad base preparation. My company recently used a system called PolyLevel (foundationsupportworks.com/solutions/polylevel.html) to repair a cracked and sunken slab surrounding a swimming pool. The repair involved injecting a high-density polyurethane foam to lift and support sunken sections of the patio slab to create an even surface.

The system is not strictly for patios and pool slabs. We’ve used it to raise interior residential slabs, and the density and expansive force of the foam can be adjusted and used to lift and stabilize large industrial slabs, and even roadways and airport runways. Here is a step-by-step description of the pool patio repair.

Install injection ports. In this case, the outer edge of the slab had dropped several inches, creating a large crack that ran almost the full length of the pool and causing reverse drainage at the house foundation. In other areas, a series of cracks created several independent sections of slab that had sunk to several different levels, creating dangerous trip hazards.

We drilled a series of ⅝-inch-diameter holes through the slab in a pattern determined by the area of the slab we needed to lift and how much we had to lift it [1]. The white areas on the slab are hole locations, which in this case were about 3 feet apart and about 18 inches from the edge of the slab. (We typically keep holes at least 6 inches from an edge; any closer and the foam tends to ooze out the side.) Each hole is fitted with a plastic port designed to receive the foam injection nozzle [2]. 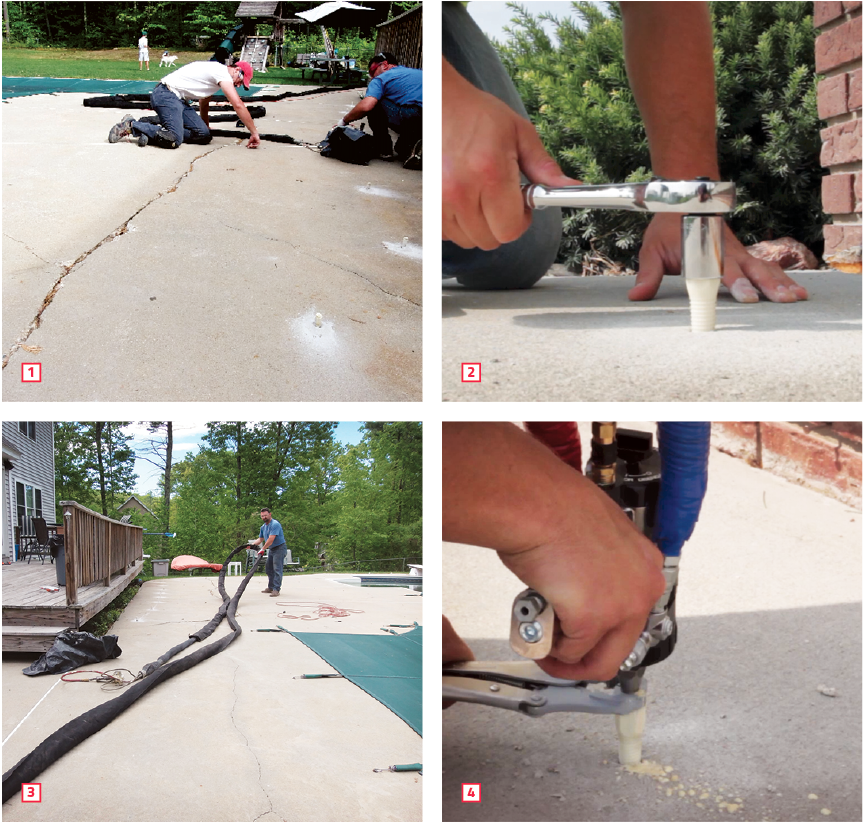 Inject the foam. Two separate liquids are pumped through separate hoses [3] to the injection nozzle [4], where they mix together. That triggers a chemical reaction that creates a high- density, expansive foam, which can be injected at temperatures above freezing, provided there is no frost in or under the slab.

Raising the slab. As the foam is injected [5A], the slab slowly rises until it is flush with the adjacent concrete [5B]. Controlling how much and how fast the foam expands depends on two factors. One is the chemical mix, which can be adjusted before it reaches nozzle; the other is the technique we use to inject the foam.

We begin injecting in short bursts to gauge how fast the foam is expanding and lifting the slab. The foam begins to stiffen quickly, but it doesn’t fully cure for 15 minutes, so there is a window of time in which to make adjustments and 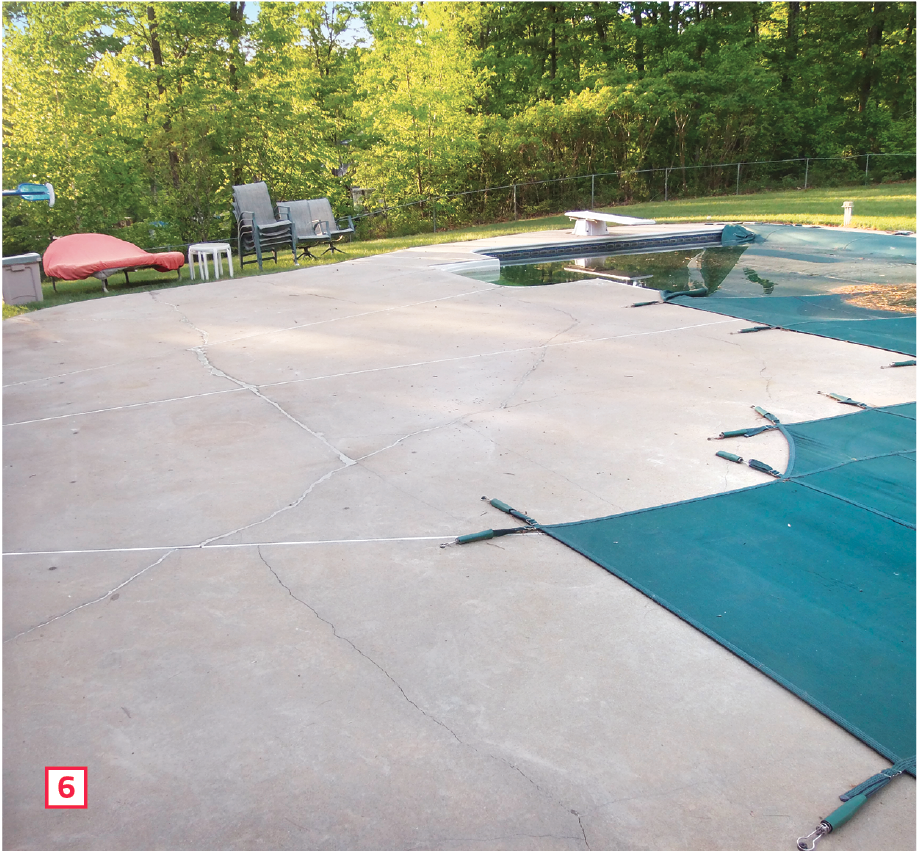 add more foam as needed. We’ve never had a problem with under- or over-filling, and over time we’ve developed several techniques that enable us to work to a tolerance of 1/16-inch. The simplest check is for the person controlling the nozzle to keep a finger or hand on the crack to feel when the surfaces are level with each other. In some cases, we also use a laser level to indicate when the slab has reached the desired height.

Caulk and cleanup. On this project, we drilled and injected one section at a time, working our way around all of the sunken areas of the patio [6]. After removing the injection ports, we sealed the holes with concrete, which leaves nickel-sized spots on the slab. We like to seal the cracks with Nexus Pro NP1 sealant to help keep water from passing through and getting under the slab, but we leave that decision to the homeowner. When we do seal them, we sometimes have to grind them a little to create a channel that’s wide enough to fill properly.

This article was adapted from the video “How to Repair a Sinking Concrete Slab” at ProTradeCraft.com; the original video, “Sinking Slab & Pool Patio Repair,” is one of many available at the Erickson Foundation Supportworks website.

Conversations, luck, and an app

How do you ensure that as you're drilling the holes you don't hit the many pvc pipes oe electric wires that are typically around the pool under the concrete? Will the foam interact with the pvc pipes?

Conversations, luck, and an app

Hi Bob,
I asked the author of this about your question Here's his response:

"In terms of knowing where to drill, we require the homeowners to point out to us where wires or pipes may be. We ourselves would have no way of knowing where such things were installed. It is something discussed and confirmed with homeowners during the sales process and again by the crews before they begin. That being said, we will always look for any outdoor lights in the area or how close we are to pool filter systems if applicable, just to make sure.

We have never run into a problem during the drilling process (knock on wood). It’s also easy enough to feel with the drill when you have poked through the concrete to the other side, and for the most part wires or pipes would most likely not be right up against the bottom side of the slab.

The one challenge we have faced with this product was for a home on a slab in Hampton, NH that we needed to raise with PolyLEVEL. The slab had a radiant heat system, so drilling had to be accurate to avoid any wires. We used a phone app actually (can’t recall the name), that assisted in highlighting the heat source through the slab. There’s more on that project at this link if you’d like (shows a picture of the phone app), it was an interesting project that was successfully completed. https://www.ericksonfoundations.com/about-us/case-studies/9805-lifting-a... "

In general, thank you for publishing a written article, with photos, in lieu of a video presentation. For all their worth video articles do not have the permanence of those written. I recognize their casual ease of production and viewing; but must stress the extended usefulness of graphic literature.

As a magazine, it is difficult to print videos, so articles, photos, and illustrations are the rule. On the web, there are more options.

The best medium for the message, in my opinion, depends on the message.

When trying to teach how to tape drywall, it takes a whole lot of words and photos to show what angle to hold the knife and how to spread it evenly and efficiently. But it can also be told in a 10-second video clip.

In general, my thoughts on delivering information is that a 3D cutaway-type illustration can do an excellent job of portraying the WHAT, or the scope of work, but they do not account for the mud, puddles, or wind that are an integral part of jobsites. To show HOW to execute what is shown in the illustration, I think photos of people doing the task are the best way to teach HOW. Of course, both the illustration and the photos should be accompanied by well-chosen words. In my opinion, the main text accompanying drawings and photos does an excellent job of describing WHY it matters.

Get the right balance of text, drawings, and photos, and you can deliver a lot of information in a succinct package.

That is the art of making magazines.

Of course, moving from a magazine to a website opens more opportunities and tools for info delivery. Using the drywall taping example above, what could take three or four photos, a small drawing, and a paragraph can be accomplished with a 10-second video clip. A much better editorial investment.

To build on the benefit of a 3D peel away drawing, we can make an animation that shows the order of operations for the construction assembly. At ProTradeCraft we publish new animated construction details every month, most of them accompanied by a 3D peel away drawing that can be printed and posted on a jobsite or handed out to subs.
Running text translates well to the spoken word found in podcasts.

I think the gratuitous use of video is a waste of the viewer's time, and I also believe they can save time for viewers when done well. Each issue of Professional Remodeler contains a handful of pages from ProTradeCraft, which is a digital construction journal. The articles in ProRemodeler are directly converted from videos, animations, and podcasts; this article is an example of that. The photos used in the piece are screen grabs, and the text is taken from the voiceover. We always include a transcript of videos for viewers in case they would prefer read than watch.

You can see the original video here: https://www.protradecraft.com/video/sinking-concrete-slab-pool-patio-repair

This is probably more of a response than you expected, but you just happened to hit on a topic that, as an editor, I'm passionate about.

Be careful here, if sewer piping is under the slab and there is a gap above and below the pipe the piping can be pushed down and then you will have to saw cut the slab and replace the sewer lines to get back to the correct slope. Been there.

My housewas built on a raft slab (2 slabs with a joiner in the middle) on filled land. The house has a step crack on the left hand side exterior wall which tells me there is subsidence occuring. Lazer is showing 100mm subsidence on back right hand side (opposite side and different slab to exterior walla crack.
I decided to take off all floor coverings where it has subsided 100mm and have found no cracks, apart from hairline cracks, in the RHS slab.

Will this form of underpinning and or slab jacking help my case.