Though The Breakfast Club and Footloose may be long gone, this outdated bathroom remained What was it that made us designers (including myself) so crazy about big whirlpool tubs in the 1980s and well into the ’90s? Was it Julia Roberts’ bubble bath scene in Pretty Woman? The image of Al Pacino in Scarface in his gigantic bubble bath? Or perhaps the cheesy ads from the ’70s and ’80s for honeymoon resorts with those red, heart-shaped tubs. Maybe they fed a fantasy and created demand for the massive whirlpools with acres of tile deck around them that dominated the “luxury” bathrooms of 20 or 30 years ago. 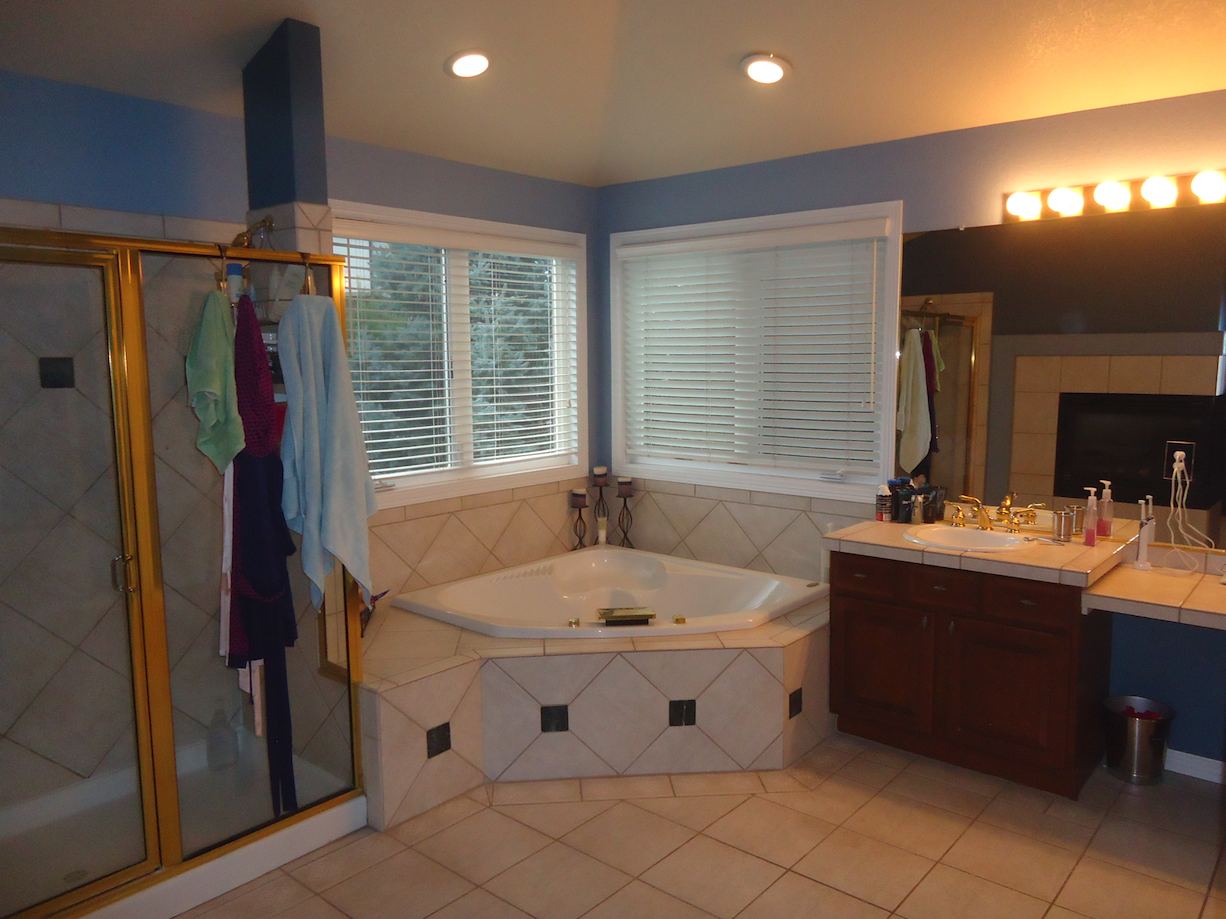 Luckily, those relics of a bygone era are now being rethought, like this one (photo, right), built in 1992 in a Denver suburb. The tub and deck ate up most the room, while the shower, with its ’80s brass trim, was squeezed into a small corner. The shared vanity was pushed to another side, where the homeowners fought for control of the counter space between their two sinks. Lighting consisted of a brass Hollywood lightbar over the mirror and two giant cans spotlighting the tub.

Another deficiency was that the bathroom was open to the master bedroom and the view consisted of a messy vanity. In the bedroom, a three-sided fireplace was meant to be the focal point, but it was off to the side of the bed, as was the television.

My associate Don Gibson and I tried several floor-plan options before hitting on this one. We closed off the bathroom from the bedroom, repositioned a new gas fireplace, and moved the access point to a door in the corner where the shower used to be. This last decision opened up a large corner for a luxury megashower, with his and hers controls and heads. There’s also a bench for shaving or sitting. The tile floor has an electric heat mat beneath, on a timer control. This year, Denver had a cold, wet spring, so the homeowners used that feature well into May.

One aspect of the design that the clients particularly like is the south-facing skylight. We offered the option of a moveable shade, but they declined, not minding the “hot spots” that the clear glass skylight throws on the bath below. 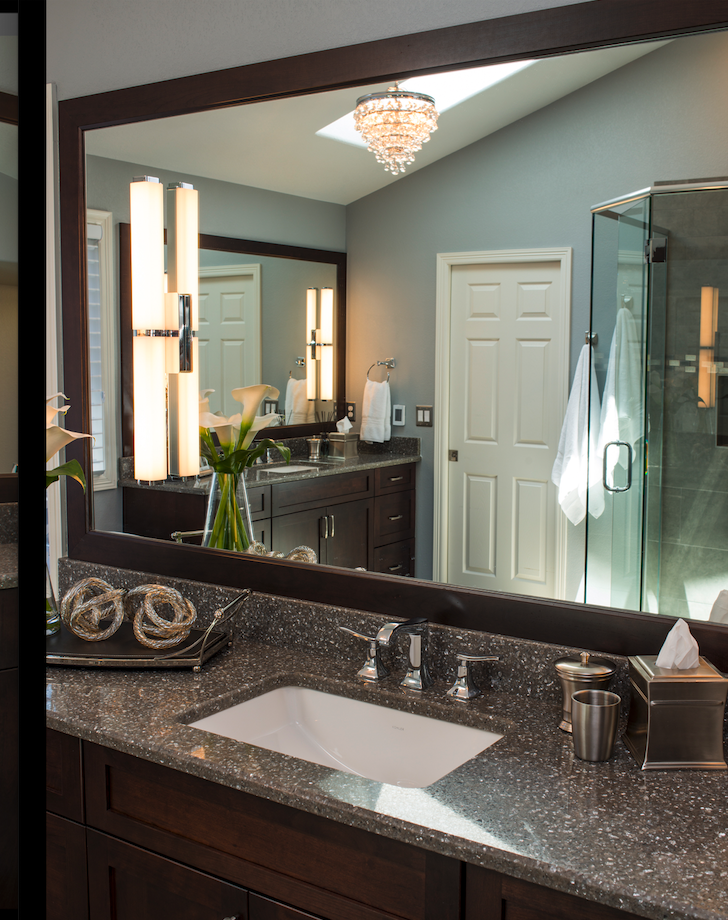 Finally, the new Victoria + Albert tub sits under the corner windows, with an elegant Brizo faucet and hand shower standing behind like a piece of jewelry. The elimination of the tub deck allows the floor to flow under and around the tub, incorporating it more into the room—it’s a feature that is both retro and modern.

Lighting was redone, with frosted 2,700K LED sconces mounted on the mirrors to either side of the user’s face. In addition, two high-intensity LED downlights now sit above the shower, plus one surface LED fixture by the closet door.

All fixtures have their own dimmer switches for precise control. In total, for this small room, there are five lighting circuits with dimmers, but the owner reports, “Most of the time we don’t even turn on the lights during the day since the skylight is enough.” 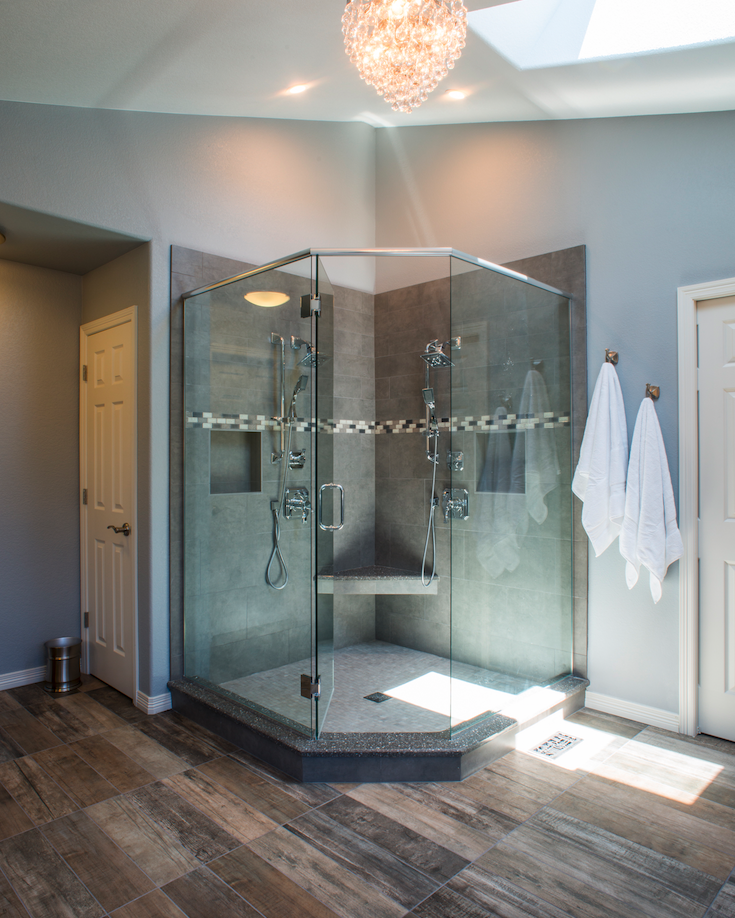