The Difference: Roofing Inspection vs. Estimate

When is a roof inspection legitimate, and when is it just the precursor to an estimate? The call wasn’t unusual. A Los Angeles-area homeowner found a shingle in their shrubs and wanted Cert-A-Roof of Orange County to come take a look at the roof. When company president Paul Watrous explained that the inspection would cost $300, the homeowner balked. Why was Cert-A-Roof charging for what three or four other area roofers would do for free, the couple asked.

“A free estimate is people hopping up on the roof looking for what is visibly wrong,” Watrous told them. What he proposed instead was to examine not just the roof but the interior rooms of the house (for wall cracks and ceiling stains), the attic (for evidence of moisture), and the perimeter (to check the condition of the foundation), before ascending the roof to inspect flashing, shingles, and underlayment, as well as to photograph potential trouble spots.

And not only would the inspection—typically lasting 45 minutes to an hour—be far more detailed, it would produce documentation. Watrous would email a report with a minimum of 50 photographs, describing issues in detail. He would also provide certification that the roof was leak-free, along with his assessment of the future life of that roof, and a fully priced-out list of necessary repairs, should they be needed. The couple opted to use his services.

The Roof at a Glance

Given the importance of the roof in protecting the building, the casual nature of many roofing company inspections—a “cursory glance” is how another roofer describes it—may seem puzzling. That is until you figure that an experienced roofing estimator can tell, literally at a glance, where a roof system is failing and what should be done to mitigate that. In many cases, when a roofing company gets a call from an alarmed homeowner with a roof leak, a glance may be all that’s needed.

But a glance isn’t good enough for everyone. Real estate agents, people buying a house, banks issuing a mortgage, insurance companies writing a homeowner’s policy; for them, nothing less than a detailed, written report will pass muster.

Many roofing companies don’t have the ability or the desire to create that report. A few, known as “real estate roofing companies,” specialize in producing detailed, written documentation on the condition of the roof. These are the companies that regularly get called when a house is on the market. In addition to the fee for the inspection and report—typically from $99 to $700, depending on the size of the structure and complexity of the roof—they’re also likely to contract for the repair work involved. Watrous, for instance, estimates that nearly half of the inspections he conducts result in jobs for Cert-A-Roof of Orange County. For clients, the fact that the company is not out there looking to get a job from the roof inspection is what makes Cert-A-Roof the desirable service provider. 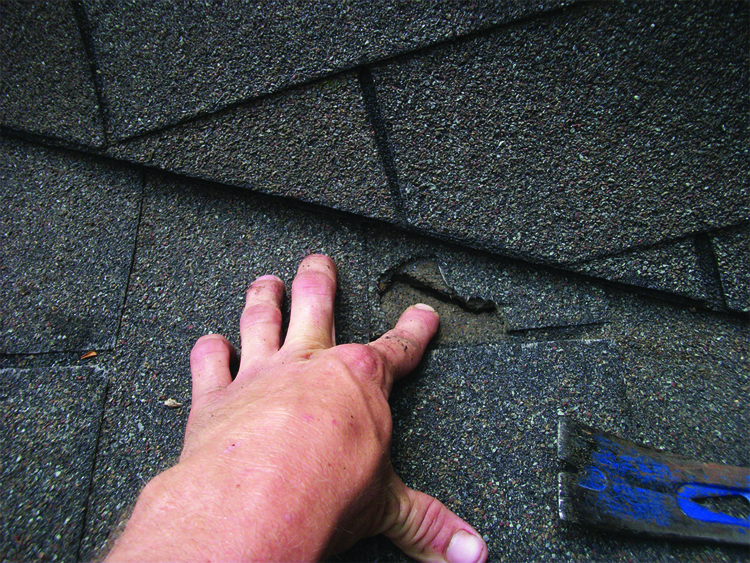 Photo: Flickr user DanaDean Roofing Company (CC by 2.0). An experienced roofing estimator can tell, at a glance, where a roof is failing and what should be done about it. In many cases, that’s all that’s needed to troubleshoot the problem and provide a free estimate. A roof inspection is far more detailed and serves a different purpose.

Roughly 5 million roofs are replaced in the U.S. every year. Insurance companies pay for many of them after claims have been filed. However, more and more providers will refuse to renew homeowners’ insurance policies on homes with a roof that’s more than 15 to 20 years old. Some will cover the home but will require an inspection—with a written report—in order to renew a policy on a house with an older roof.

Homeowners should also know that in the event of a leak, their claim for reimbursement of damages can be denied if an adjustor finds that the owner failed to perform proper maintenance on the roof. Improper or nonexistent maintenance also gives roofing manufacturers a reason to void a product warranty claim. And it’s difficult to maintain a roof that isn’t inspected, since the point of an inspection is to identify minor issues that could later become serious problems.

Still, few homeowners will actually contact a roofing company or roof-inspection service unless they have an obvious problem. “Out of sight, out of mind,” is how California contractor and NRCIA member Bill Hogue explains it. A roof, he says, is “not something people want to spend money on,” which is ironic, he points out, given that a well-maintained roof provides major curb appeal to potential buyers.

How Good Is That Report?

Real estate transactions can be fertile ground for roofing companies since buyers may be willing to haggle about many things, but the roof isn’t one of them. Moreover, while organizations such as the National Association of Home Inspectors provide their members with detailed training on what to look for in a roofing system, some home inspectors are reluctant to climb the roof for an up-close, methodical look.

“Home inspectors are generalists,” Watrous points out. Many home inspection companies carry errors and omissions (E&O) insurance, a form of liability insurance that indemnifies homeowners should inspectors fail to report an issue that then becomes a problem. According to Les Watrous, managing director of the NRCIA and father of Paul Watrous, quoted earlier in this story, 30 percent of E&O claims against home inspectors involve roofing issues. Les says that insurance companies, rather than paying out all those claims, now encourage home inspectors to bring a roof inspection specialist in if they have any questions about the condition of the roof. The greatest portion of inspections done by NRCIA members, he adds, involve real estate transactions.

How Much Does It Cost?

Kevin Bumstead, owner of Stan’s Roofing & Siding, in suburban Chicago, uses a ladder, an iPad, a tape measure, and, frequently, a drone, to gather the information he needs to provide homeowners with a proposal for work on their roof. The inspection, and Bumstead’s proposal, are free. But if the inspection involves a real estate transaction, the price goes up to $475, he says. Why supply a stranger with time and information and not be remunerated?

If a caller wants a roof inspection, complete with a report, Maggio Roofing, in suburban Washington, D.C., produces a document with photos. Maggio, says its president, Scott Siegal, charges for that report based on the amount of time spent collecting the data and preparing the document. The cost of a “full-blown report,” he says, is between $250 and $500. The company doesn’t charge if a homeowner simply wants a work estimate.

Companies such as Eastman Roofing & Waterproofing, in San Jose, Calif., make it remarkably easy to understand precisely what a roof inspection involves. The bullet-point description on the company’s website includes pricing—$140 to $185—by ZIP code. President Jim Eastman says that his company’s relationship with local real estate agents helped sustain Eastman Roofing through California’s recent five-year drought. The fact that Eastman Roofing’s inspections were rigorously honest got around. “We would call and tell the homeowner, ‘You have eight years of life left on your roof,’ wife and co-owner Linda Eastman says, “and [the homeowner] would say: ‘The other roofer told me my roof was shot and I had to replace it right away.’”

An Estimate Worth Paying For?

Design/build remodelers who’ve been in business 15 years or longer will remember when homeowners expected free information and project ideas—including drawings-—as part of the effort to secure their business. Today many companies routinely charge a design fee and even bill for consultative services, including a preliminary meeting with homeowners to discuss the project.

Could residential roofing, where the free estimate is standard operating procedure, undergo a similar transition? Only if roofing companies convince prospects that the inspection is a legitimate service and not a ploy to sell roof replacement.

Some roofing companies offering inspection services and repair address this issue head-on. For instance, Caden Roofing, in Austin, Texas, acknowledges on its website that, “Some homeowners might be hesitant to schedule a roof inspection, thinking the roofing company will ‘find’ issues that really aren’t there and suggest expensive services.” It then goes on to say: “At Caden Roofing, you can lay that worry aside. We’re not interested in scamming our customers—our reputation rests on giving honest feedback and providing quality, reliable solutions.”

Wow! Drone use for renumeration

I enjoyed your article and would appreciate the opportunity to partner with roofing companies here in the Phoenix metro who would provide services for a modest fee in conjunction with the inspection services I provide. I’m open to any input you might have. Thanks

Wow! Drone use for renumeration

$475 for a roofing inspection with a drone. thats a lot. i wonder how many Kevin does every year. good way to make some extra money instead of sweating it out on a hot roof